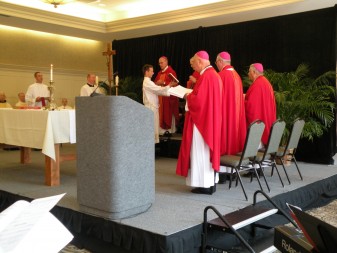 Bishop Kevin C. Rhoades was the celebrant June 22 for the Catholic Media Conference, which met in Indianapolis this year. Bishop Rhoades recalled his predecessor Archbishop John F. Noll who founded Our Sunday Visitor 100 years ago, and spoke of St. Thomas More and St. John Fisher. “Inspired by these great champions of the faith, the martyrs St. Thomas More and St. John Fisher, and the bishop, writer and publisher John Francis Noll, may we go forth from this convention with renewed zeal for the spread and defense of the Gospel, remembering the words of St. Peter: ‘If you are insulted for the name of Christ, blessed are you, for the Spirit of glory and of God rests upon you.’”

We are in the midst of “a great hymn of prayer for our country,” the Fortnight for Freedom called by our U.S. Bishops to pray, teach, and witness for religious liberty.

I am grateful to Bishop D’Arcy for celebrating the opening of our diocesan observance of the Fortnight at Saint Matthew Cathedral on June 22nd, the Memorial of Saint John Fisher and Saint Thomas More. That same evening, I celebrated the closing Mass of the annual convention of the Catholic Press Association in Indianapolis. Though I got a flat tire on my way there (on route 69), I only arrived 10-15 minutes late! In my homily, I reflected on the example of those two great English martyrs who faced death rather than deny the authority of the Catholic Church and violate their consciences.

The next day, I flew to Maryland to attend the 25th anniversary of priestly ordination of my first cousin, Father John Dakes, the son of my mother’s brother. Father John is a pastor in southern Maryland (in the archdiocese of Washington) which has a rich Catholic heritage. My cousin’s parish, Saint Aloysius Gonzaga in Leonardtown, celebrated its 300th anniversary two years ago!

It was providential to be in southern Maryland during this Fortnight for Freedom, since it was there that Catholics in the original 13 colonies first enjoyed religious liberty. We bishops recount a bit about this history in our statement, “Our First, Most Cherished Liberty”!

In 1634, a mix of Catholic and Protestant settlers arrived at Saint Clement’s Island in Southern Maryland from England aboard the Ark and the Dove. They had come at the invitation of the Catholic Lord Baltimore, who had been granted Maryland by the Protestant King Charles I of England. While Catholics and Protestants were killing each other in Europe, Lord Baltimore imagined Maryland as a society where people of different faiths could live together peacefully. This vision was soon codified in Maryland’s 1649 Act Concerning Religion (also called the “Toleration Act”), which was the first law in our nation’s history to protect an individual’s right to freedom of conscience.

Maryland’s early history teaches us that, like any freedom, religious liberty requires constant vigilance and protection, or it will disappear. Maryland’s experiment in religious toleration ended within a few decades. The colony was placed under royal control, and the Church of England became the established religion. Discriminatory laws, including the loss of political rights, were enacted against those who refused to conform. Catholic chapels were closed, and Catholics were restricted to practicing their faith in their homes. The Catholic community lived under these conditions until the American Revolution.

Though religious liberty in Maryland was relatively short-lived, I reflected on this important period in Catholic American history during my quick visit to Maryland for my cousin’s anniversary celebration. The settlers who came from England to Maryland in 1634 included two Jesuit priests and a Jesuit brother. The ships, the Ark and the Dove, landed on the small Saint Clement’s Island where, on March 25th, the Feast of the Annunciation, Father Andrew White, S.J., celebrated the first Mass in the English-speaking colonies of America.

Father White and the others rowed to the mainland and began to establish the Church among the native-Americans. Their first settlement, and Maryland’s first capital, was historic Saint Mary’s City. I learned that the site of the first Catholic chapel has been discovered there and they are now constructing a replica of that brick chapel. Near my cousin’s 302-year old parish is an even older parish: Saint Francis Xavier. It is the oldest Catholic church in continuous use in the original thirteen colonies, founded in 1640.

These places in southern Maryland reminded me that religious liberty is indeed our most cherished freedom. Many of our ancestors in the faith suffered because of its denial. Many fought for the cause of religious freedom.

As we approach the Fourth of July, the day when we celebrate our nation’s independence, it is good to reflect on our religious liberty. We give thanks that our Founding Fathers recognized its importance and enshrined this liberty in the First Amendment of our nation’s Constitution. At the same time, it is important to remember that religious liberty is not a right granted to us by the government. It is granted to us by God, a right that all governments are called to protect.

In the face of recent threats to religious liberty in our beloved nation, most notoriously the HHS mandate, we must urgently pray and work for the defense and protection of religious liberty in our land. I cordially invite you to the Mass for Religious Liberty I will be celebrating at 5:00 p.m. on Saturday, June 30th, in the Cathedral of the Immaculate Conception, Fort Wayne.

You may also wish to consider attendance at Mass in our parishes on the Fourth of July, the last day of the Fortnight for Freedom. As we thank God for our nation’s Declaration of Independence 236 years ago, let us pray for the protection of our first freedom, our religious liberty. Prayer is always the greatest source of strength for us and all our efforts and work. Happy 4th of July to all!