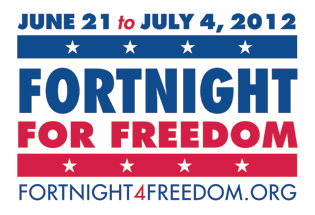 WASHINGTON (USCCB) — Pope Benedict XVI spoke earlier this year about his worry that religious liberty in the United States is being weakened.

He called religious liberty the “most cherished of American freedoms.” However, unfortunately, our most cherished freedom is under threat. Consider the following:

• HHS mandate for contraception, sterilization and abortion inducing drugs. The mandate of the Department of Health and Human Services forces religious institutions to facilitate and fund a product contrary to their own moral teaching. Further, the federal government tries to define which religious institutions are “religious enough” to merit protection of their religious liberty.

• Catholic foster care and adoption services. Boston, San Francisco, the District of Columbia and the State of Illinois have driven local Catholic Charities out of the business of providing adoption or foster care services — by revoking their licenses, by ending their government contracts, or both — because those charities refused to place children with same-sex couples or unmarried opposite-sex couples who cohabit.

• State immigration laws. Several states have recently passed laws that forbid what they deem as “harboring” of undocumented immigrants — and what the Church deems Christian charity and pastoral care to these immigrants.

• Discrimination against small church congregations. New York City adopted a policy that barred the Bronx Household of Faith and other churches from renting public schools on weekends for worship services, even though nonreligious groups could rent the same schools for many other uses.

• Discrimination against Catholic humanitarian services. After years of excellent performance by the U.S. Conference of Catholic Bishops’ Migration and Refugee Services (MRS) in administering contract services for victims of human trafficking, the federal government changed its contract specifications to require MRS to provide or refer for contraceptive and abortion services in violation of Catholic teaching.

• Christian students on campus. In its over-100-year history, the University of California Hastings College of Law has denied student organization status to only one group, the Christian Legal Society, because it required its leaders to be Christian and to abstain from sexual activity outside of marriage.

• Forcing religious groups to host same-sex “marriage” or civil union ceremonies. A New Jersey judge recently found that a Methodist ministry violated state law when the ministry declined to allow two women to hold a “civil union” ceremony on its private property. Further, a civil rights complaint has been filed against the Catholic Church in Hawaii by a person requesting to use a chapel to hold a same-sex “marriage” ceremony.

Is our most cherished freedom truly under threat? Yes, Pope Benedict XVI has recognized that various attempts to limit the freedom of religion in the U.S. are a serious concern. This threat to religious freedom is larger than any single case or issue and has its roots in secularism in our culture. The Holy Father has asked for the laity to have courage to counter secularism that would “delegitimize the Church’s participation in public debate about the issues, which are determining the future of American society.”

What can you do
to ensure the protection of religious freedom?

The U.S. Bishops have called for a Fortnight for Freedom from June 21 to July 4.

Please visit www.fortnight4freedom.org for more information on this important time of prayer, education and action in support of religious liberty!

All faithful are invited to attend the following:

• Bishop Kevin C. Rhoades will celebrate Mass at the Cathedral of the Immaculate Conception, Fort Wayne, on Saturday, June 30, at 5 p.m.

Almighty God, Father of all nations,

For freedom You have set us free in Christ Jesus (Gal 5:1).

We praise and bless You for the gift of religious liberty,
the foundation of human rights, justice and the common good.
Grant to our leaders the wisdom to protect and promote our liberties;
By Your grace may we have the courage to defend them, for ourselves and for all those who live in this blessed land.

We ask this through the intercession of Mary Immaculate, our patroness,
and in the name of Your Son, our Lord Jesus Christ, in the unity of the Holy Spirit,
with whom You live and reign, one God, for ever and ever. Amen.