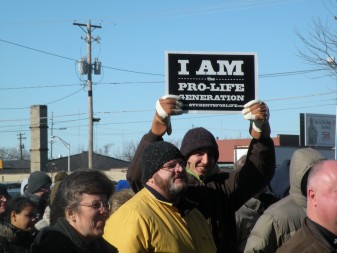 FORT WAYNE — Allen County Right to Life speaker Peter Heck pulled no punches in his description of the 50 million abortions that have been performed in this country since the U.S. Supreme Court legalized the procedure 39 years ago. He called the atrocity an “American Holocaust.”

Heck, who lives in Kokomo, is a nationally published columnist and radio talk show host heard on more than 200 stations around the country. He is also a passionate orator who makes a compelling case for life in many venues. He was keynote speaker for the local rally held recently before a full house at USF Performing Arts Center (formerly the Scottish Rite Center) in downtown Fort Wayne.

Heck spoke directly to the men in his audience and called on them to assume responsibility, to lead the fight for life. Stop being content to merely “be on the right side of life,” he said. “Be an extremist. Embrace the label. We have been passive for far too long … we must go on the offensive.”

Refusing to take a stand for life is mere cowardice, he added. President Barack Obama displayed such cowardice in 2008 when he called a question about when a child is entitled to human rights as “above my pay grade.” Heck had harsh words in response. “If an elected official can’t see that a human being is conceived in the womb, he’s not smart enough or moral enough to be our leader.”

Theoretically, Heck pointed out, the argument for life should not focus on what each human being who reaches his full potential might contribute to society, but only on the importance of the human being himself. 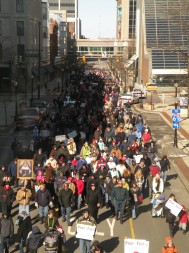 Heck closed his remarks with a powerful observation: “We stand for God, therefore we stand for life. On this issue there can be no compromise.”

Allen County Right to Life Executive Director Cathie Humbarger welcomed those in attendance and introduced the many political officeholders and candidates in the audience.

The pro-life audience encouraged many speakers with applause and seemed especially eager to “hit the pavement” on the annual March for Life through downtown Fort Wayne. This year’s event drew more than 1,000 participants.