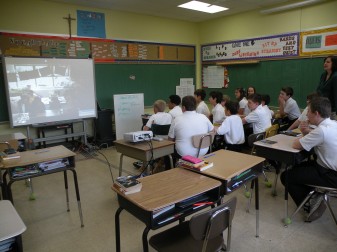 Students in Lisa Zimmerman’s sixth-grade St. John the Baptist, Fort Wayne, class, connect with pupils at St. Benedict’s School in Handforth, England. With the aid of Skype and the Smart Boards, students between the two Catholic schools connected with video and audio and exchanged questions about uniforms, activities and food they like.

The visit was arranged, shortly after St. Benedict’s School’s headmaster, James Gallogly, visited the diocese for the installation of Bishop Kevin C. Rhoades in January. Gallogly and St. John the Baptist Principal Jane Sandor arranged the exchange, which Sandor hopes will be a monthly exchange between the classes.

Pupils, as students are called in England, from Carole Harding’s class, exchanged questions and answers with Lisa Zimmerman’s sixth-grade class at St. John the Baptist. The students have exchanged e-mails and Power Point presentations explaining what life is like in Handforth and Fort Wayne.

With an easy connection, students were quickly exchanging comments. What time does school begin? At St. John the Baptist, classes begin at 8 a.m.; at St. Benedict’s School, 9 a.m.

What kind of sports do the students enjoy? At St. John the Baptist, the roster includes the usual CYO sports; but in England, criquette is the sport.

The English students, whose school has 195 pupils, thought the 300 students of St. John the Baptist was a large school.

The Indiana students were quite impressed when Harding showed the glockenspiel to the American students.

Sixth graders at St. John the Baptist returned Wednesday from a trip to the Henry Ford Museum in Dearborn, Mich. The St. Benedict pupils told of their two-day field trip to a castle.

In spare time, the English pupils enjoy rugby and piano. The American students mentioned participating in sports such as soccer, track, volleyball, hanging out with friends and playing video games.

This initial video cast was a get-acquainted time where ideas were shared, Sandor indicated.

“A project such as this requires the efforts of many people,” Sandor said. “At St. John the Baptist, Johnathan Brouwer, parent, and Bill Combs, Intuitive Technology consultant, have coordinated the technology needs with test runs last week.”

Dr. Mark Myers, superintendent of Catholic Schools for the Diocese of Fort Wayne-South Bend, is in support of this venture.
“We hope there will be several more learning opportunities for students in England and Fort Wayne,” Sandor added.