Two diocesan high schools – by all accounts, friendly rivals in the sporting arena – teamed up on Friday, March 18, to promote musicality within Catholic schools in the first-ever Saint Cecilia Honor aBand. The music directors at Fort Wayne’s Bishop Dwenger and Bishop Luers High Schools, Don Cochran and Adam Hanke, respectively, began a collaboration last semester to “reinvigorate music in our Catholic schools and diocese,” as Hanke put it.

Hanke stated that it took a long time to bring the idea to fruition as well as the support of the feeder schools, Sweetwater Sound and Quinlan and Fabish Music Company. The idea originally came from Nathan Richter, the band director at St. Vincent de Paul School in Fort Wayne.

This joint effort led to “a gathering of Catholic musicians,” as the day-long event, ending in an evening concert, was advertised. Two instructors from the Schools of Music at Purdue Fort Wayne, Dr. Daniel Tembras and Dr. John Oakley Egger, were invited in to teach the attendees. 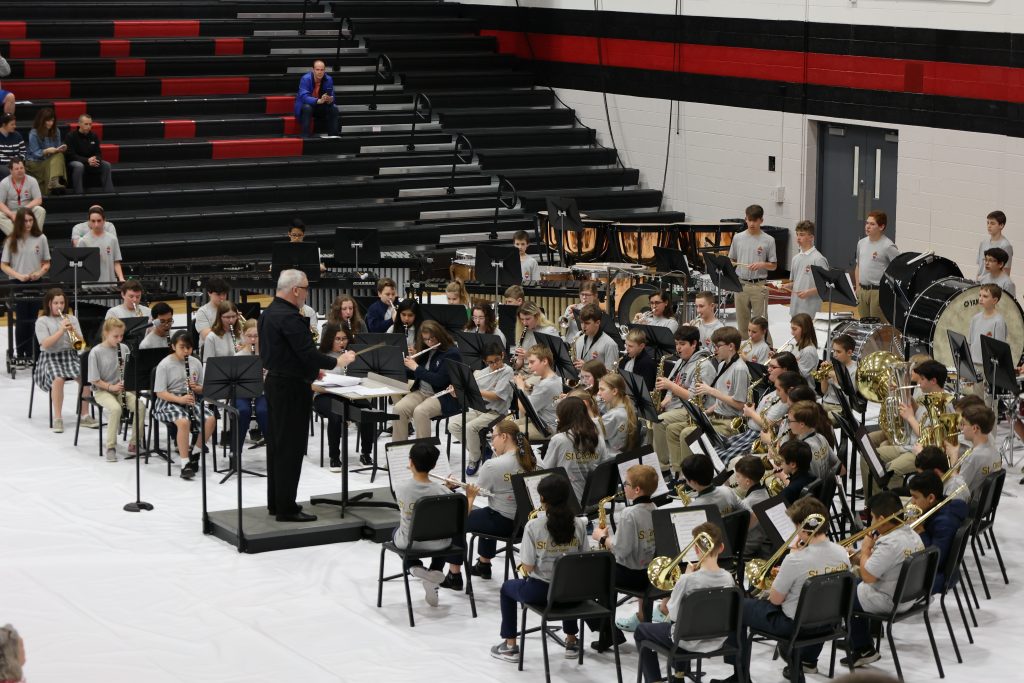 Photos by Jennifer Barton
Fort Wayne area high schools Bishop Dwenger and Bishop Luers combine their musical talents for the first-ever Saint Cecilia Honor Band on March 18 in the Bishop Luers gymnasium. Students from feeder schools were invited to spend the day learning and return in the evening for a concert. The middle school band was directed by Purdue Fort Wayne professor Dr. John Oakley Egger.

“In band, we are not competitors with Bishop Luers,” Cochran said. Both high schools have been seeking ways to increase awareness of their band programs and build up their music departments.

He continued, “Many of our partner schools do not have band programs that meet daily as many of our public-school counterparts have in place. This impacts student proficiency.”

With the creation of an all-Catholic band, Cochran’s goal is to give students who may not have the opportunity to study all aspects of music within the classroom a chance to “participate in a large performance with nationally recognized professors of music.”

This has not been the first time the two high schools have come together to support each other. Among the many times throughout their history, more recently during the fall football season when Bishop Luers could not use their own field for a sectional game, Bishop Dwenger offered their Shield’s Field as an alternate location for the Knights to play. Hanke stated that during that game, “Don offered to involve us in the concession stands for the game and the profit we both made for that event was put towards the funding of this event.” 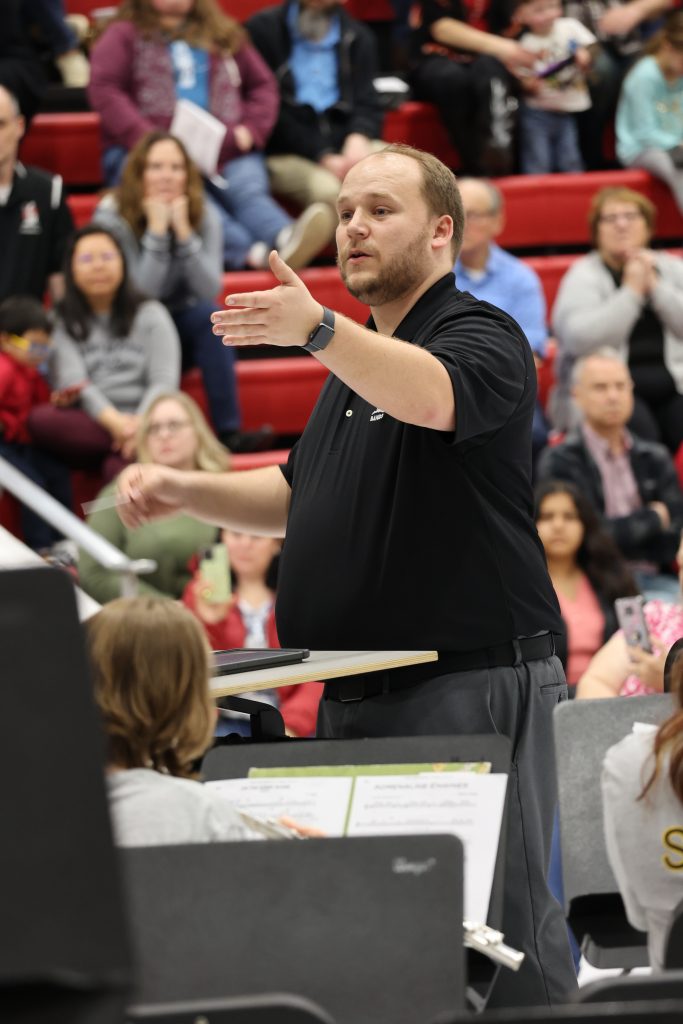 Bishop Luers was chosen as the location for the Saint Cecilia Honor Band’s first concert in order to “help show off the renovations that have been happening at Bishop Luers,” Hanke said. The plan is for Bishop Dwenger to host the concert next year and then to seek out a new venue as the program continues to grow and offer more performance opportunities.

Dr. Egger graciously agreed to conduct the middle school band while Hanke directed the high school musicians. Hanke told the audience that “On the Kerry Shore,” which evokes images of the Emerald Isle, was his favorite piece to ever have directed. The performance ended with a bang as the high school band played the high-energy piece “Adrenaline Engines.” After the high school band performance, Hanke gave an emotional expression of gratitude to the students and to those who attended to support them. He spoke of how music touches people; how it touches him personally.

Parents, grandparents and others in the crowd certainly seemed to agree, giving both bands standing ovations. Accolades flowed through the crowd after the concert, and the energy and enthusiasm of the young performers was evident throughout the evening, speaking to the success of the joint effort. Hanke himself was greatly pleased by the performance of the young people, especially with only a couple of hours’ worth of practice under their belts.

Chris and Alicia Elliott came to watch their son Nathan play saxophone in the high school band. They agreed that it was a top-notch performance. “We loved it. It was a great show. Impressed with what Mr. Hanke put together and collaborating with the Dwenger people. Wonderful program,” Chris stated. 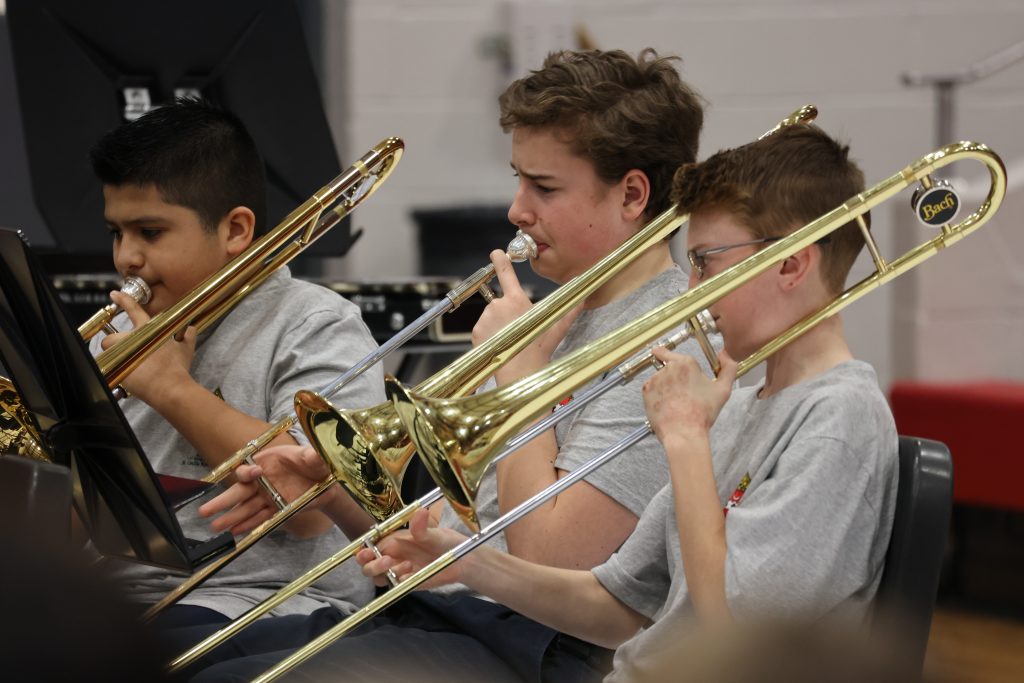 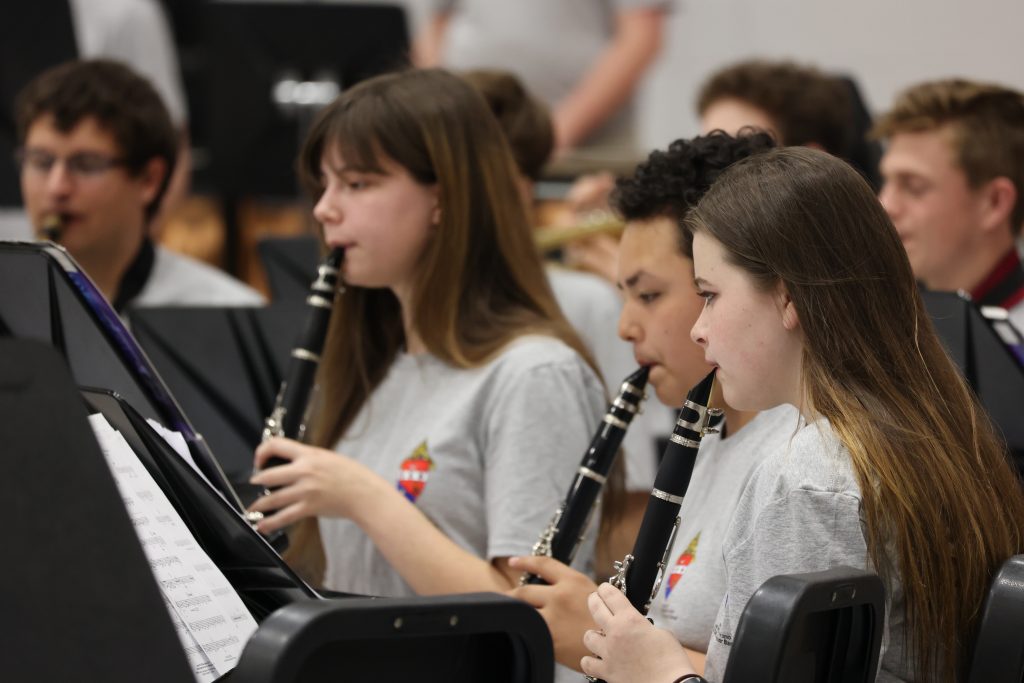 Alicia was impressed to see “all the behind-the-scenes work that you know as a parent that’s going on and to see the finished product, it’s awesome.”

Studies have shown a link between playing a musical instrument and academic success. Music connects people, inspires people, gives them an encounter with beauty that is so needed in the world today. Experiences like this help foster a love of music in young people.

As Cochran said, “My hope is that every student finds the excitement that being a part of the band can become. Music is a big part of our lives and being able to create music together with others offers for a very special experience. Music teaches us how to ‘feel.’”

Watching the students from different schools and different backgrounds come together for a harmonious evening was an encouraging sight that will hopefully continue for years to come.