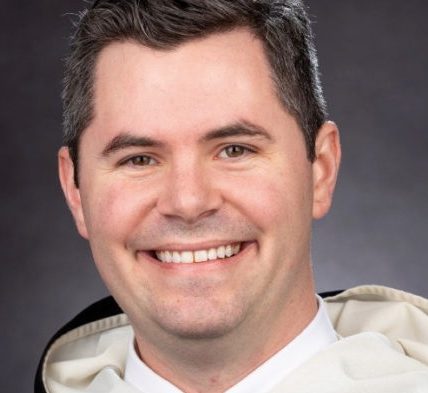 Dominicans are a proud order, according to Father Patrick Briscoe, OP – proud of their history that dates back to 1216, proud of their unity as an order, proud to be an intellectual order. Their work, he said, lies in “preaching for the salvation of souls.” For Father Briscoe, the media – newspapers, websites, and podcasting – has become the platform he now uses for preaching. Growing up in the Diocese of Fort Wayne-South Bend, where Archbishop John F. Noll’s legacy permeates much of the Catholic culture, it seems natural that Father Briscoe became the editor for Our Sunday Visitor’s weekly newspaper on Aug. 1 of this year.

His formation for the Order of Preachers began right here in the diocese. A product of St. Charles Borromeo Grade School in Fort Wayne, he stated that his experience “of the Church and the parish was so life-giving … it was just fantastic; it was an amazing childhood, and the teachers in our school that helped us to learn the Faith, to take it seriously; that made a huge impact on me.”

While a student at Bishop Dwenger High School, he began taking a potential vocation to the priesthood seriously by going to adoration with his family at his home parish and becoming one of the primary servers for special events such as Holy Week and Masses at the Cathedral of the Immaculate Conception at Bishop John M. D’Arcy’s request. “And that all made a huge impact on me. For me, it was really altar serving that was very important and a kind of growing love for the liturgy.”

He considered seminary after high school, but claimed he “got cold feet” and instead went to Hanover College in southern Indiana. “I spent the year talking to everyone about politics and religion, and I realized that one of those things was more important to me than the other.”

He spent another year and a half in seminary for the diocese at Immaculate Heart of Mary in Winona, Minnesota. It was here that he was introduced to the Dominican Order through a professor named Father Fabian and realized he wanted a more religious life than that of a diocesan priest. Visiting the Dominican seminary in Washington, D.C., he “felt like I was arriving home for the very first time.”

The Dominican Order, which produced such great Church figures as St. Thomas Aquinas, values “informed preaching; a densely, richly, theological preaching, so it’s always been closely allied with a life of study,” Father Briscoe said. This love of study led him to his first assignment in Providence, Rhode Island as a theology instructor at Providence College, eventually becoming chaplain there during the height of the pandemic.

It was a difficult year, but in spite of strict regulations, “we got a lot done. I was able to be very close to the students. There’s a lot that I’m proud of from that year,” including raising the morale of students in quarantine by driving a golf cart loaded with Dominicans with guitars and driving it up and down the streets, serenading the students, some of whom came out onto their balconies to express their gratitude in cheers and song.

The media world pulled him away from university life, however. After spending a few years as a columnist and theological editor for Aleteia, the largest Catholic website in the world, he was offered an Editor-in-Chief position there, which he held for a year before OSV leaders asked him to become editor of their paper. With a deep love for Archbishop Noll, how could he refuse to be a part of continuing his legacy?

“Archbishop Noll stands out as such a heroic figure because he was an innovator and I think that that spirit of innovation, of change, while it’s an apostolic spirit, really, I’d say, the drive to go out and really engage and reach people, I think that’s what the Church needs most today. I think that honoring his legacy means for us to look at these projects that have been fabulous and then to dare to re-envision them,” he said. He will stay based with his order in Washington, D.C., while working remotely with his Huntington-based OSV team to bring quality content to readers.

Father Briscoe connects the upcoming launch of OSV News on Jan. 1, 2023, a national news service provided to dioceses across the country, to what Archbishop Noll began 110 years ago. “It’s an opportunity to reflect on where we want to go and the future things we can do for the Church … Catholic media, our responsibility is to hand on the light of Faith, and to do that by communicating the goings-on of the Church.”

The challenges to reaching Catholic audiences are immense in this age of social media and supposed Catholic websites that are not faithfully Catholic in nature, but Father Briscoe hopes to see OSV “rise above the fray” by bringing harmony and unity.

He also aspires to engage current readers and gain new ones through increasing content focused on faith stories and issues relevant in today’s culture. “We know that the Catholic reader is interested in things that really nourish their faith. Things that are not just historical, but that inform how he or she lives their faith.”

In addition to his new position, he also hosts “a very fun podcast” called “Godsplaining” with some of his fellow Dominicans, which can be found at godsplaining.org or Apple Podcasts, Spotify, and other platforms.