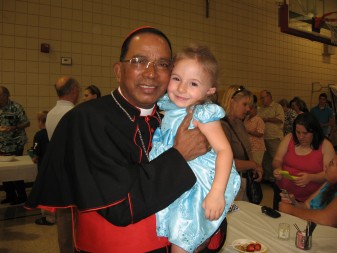 Cardinal Telesphore P. Toppo, Archbisop of Ranchi, India, holds Sophia Gallucci, whom he baptized two years ago on another visit to the United States. Sophia is the daughter of Frank and Tina Gallucci of St. Patrick Parish, Arcola.

FORT WAYNE — Because of Christ’s instruction “to go, teach and heal,” an Indian cardinal finds himself in the United States as part of the foothills to a mountainous project he is undertaking at home in Ranchi, Jharkhand, India.

Cardinal Telesphore P. Toppo, archbishop of Ranchi, has assumed the leadership role in establishing a new medical college and hospital in Ranchi to reach the marginalized sick people, with greater partnership within the Church network and with like-minded groups.

In an area where infant mortality is as high at 69 in 1,000 live births and where over 60,000 perish annually to tuberculosis, and with leprosy, HIV and AIDS threatening more, Cardinal Toppo moves on with the backing of CBCI, Catholic Bishops Conference India.

The Catholic Church in India, with its network of 5,525 healthcare facilities across the country, is the single largest healthcare provider in the private sector in the country, and it is second only to the government of India in promoting health and providing care.

Planning for the Ranchi medical center and hospital began in 2008 with two rounds of talks in India involving experts from Georgetown University and a third meeting at Georgetown in Washington, D.C.

The cardinal’s present visit was for further planning with Loyola University in Chicago where rapport was established for further collaboration. Plans also call for participation from Johns Hopkins University and School of Medicine.

The outreach to these leading medical institutions and the Catholic Relief Services, CRS, and other professional planning groups is to establish a master plan for the Ranchi Medical Center.

Cardinal Toppo has included Fort Wayne in his American visit to Father Cyril Fernandes, pastor of St. John the Baptist Parish, Fort Wayne, and Father Alex Dodrai, pastor of St. Patrick Parish, Arcola. Father Cyril’s uncle is the vicar general of the Ranchi Diocese and the rector of the major seminary.

Cardinal Toppo was the main celebrant at 10:30 a.m. Mass on Sunday at St. John the Baptist, Fort Wayne, concelebrating with Father Fernandes, Father Dodrai and Father Peter Raposo, former secretary to the cardinal, who is in this country to get a masters degree in communications at DePaul University in Chicago.

In his homily, Cardinal Toppo described his experience as an papal elector when Cardinal Ratzinger became Benedict XVI on April 19, 2005.

At a reception following Mass, parishioners from St. John the Baptist and St. Patrick chatted with Cardinal Toppo, who graciously posed for many photos and expressed genuine interest in meeting strangers who have the common bond of the Catholic faith.