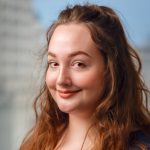 On Sunday, Oct. 9, 43 couples gathered at the Cathedral of the Immaculate Conception to celebrate milestone wedding anniversaries. This was the largest anniversary Mass held on the Fort Wayne side of the diocese in many years. The couples celebrated anniversaries ranging from 25 years of marriage, to one couple, Donald and Mary Castleman, who celebrated a union of 70 years.

Another couple, David and Anita Senesac, parishioners of St. Paul of the Cross in Columbia City, were there to celebrate 40 years of marriage. They met while working at St. Joseph Hospital in Fort Wayne. David shared how, for weeks, he asked Anita out on a date and for weeks she declined, only relenting when a good friend of theirs told her what a good Catholic man he was. She soon realized how true this was, and 40 years after their wedding day, Anita reflected, “The anniversary Mass is a wonderful time to pray for the sanctification of our marriage. It is a beautiful way to be reminded of the promises that we made to one another and God on our wedding day.” 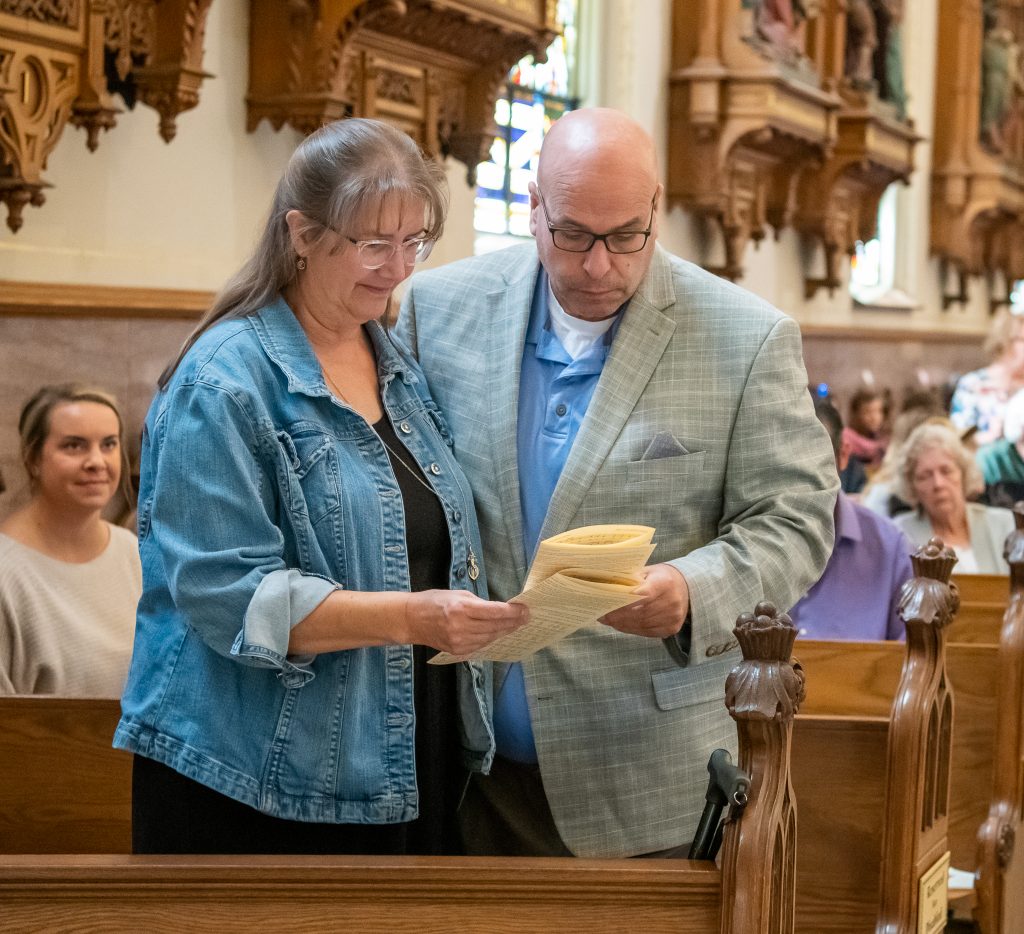 Photos by John Martin
Couples celebrating milestone anniversaries such as 25, 50, or more years of marriage are invited to a special Mass to honor them. This year’s Mass may possibly be the largest such gathering of couples that Fort Wayne has ever seen. 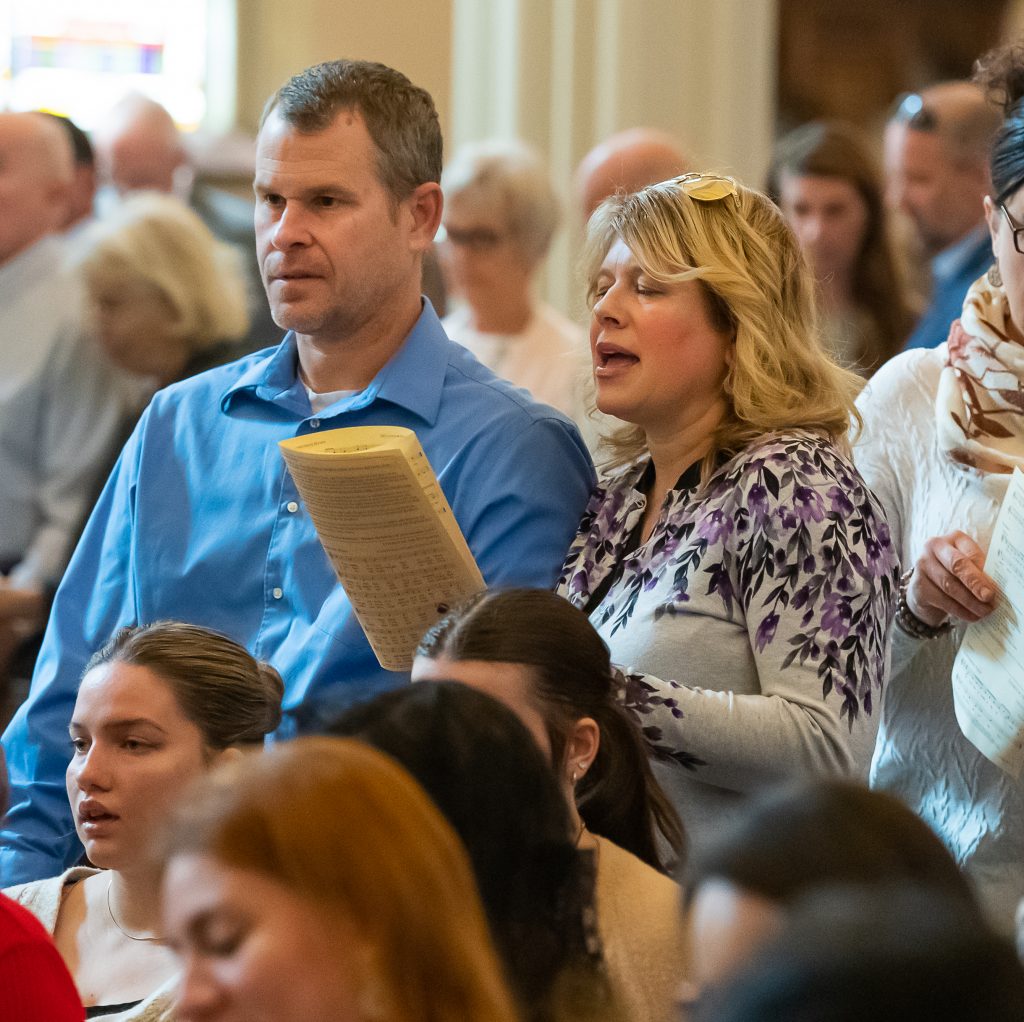 Prayer is a common theme in the life of the Senesacs. Anita remarked, “My best advice is to pray for your spouse every day. Another thing is to learn early on how to compromise with one another. Marriage should never be one-sided, but rather one that is a union of both willing to work hard and give in so that a good measure of joy can be brought into the life of your spouse.”

In his homily for the day, Bishop Kevin C. Rhoades reminded those in attendance that the very nature of God is love. “We were created in the image and likeness of God who is love, a communion of life and love – the Most Holy Trinity.  We are only truly fulfilled as human beings when we love and care for one another, when we give ourselves to others in love, when we lay down our lives for one another.”

The bishop then added, “The anniversary couples here today made a courageous lifetime commitment, a promise to be true to each other in good times and in bad, in sickness and in health. And God who is love joined them together in an unbreakable union of love. They made a gift of themselves to each other. Pope St. John Paul II famously said: ‘Man cannot fully find himself except through a sincere gift of self.’”

The bishop then told those gathered, “Anniversary couples, this is what God called you to so many years ago: to make a sincere gift of yourselves to each other in the exclusive, faithful, and fruitful union that is marriage.  He called you to love and honor each other until death do you part.” 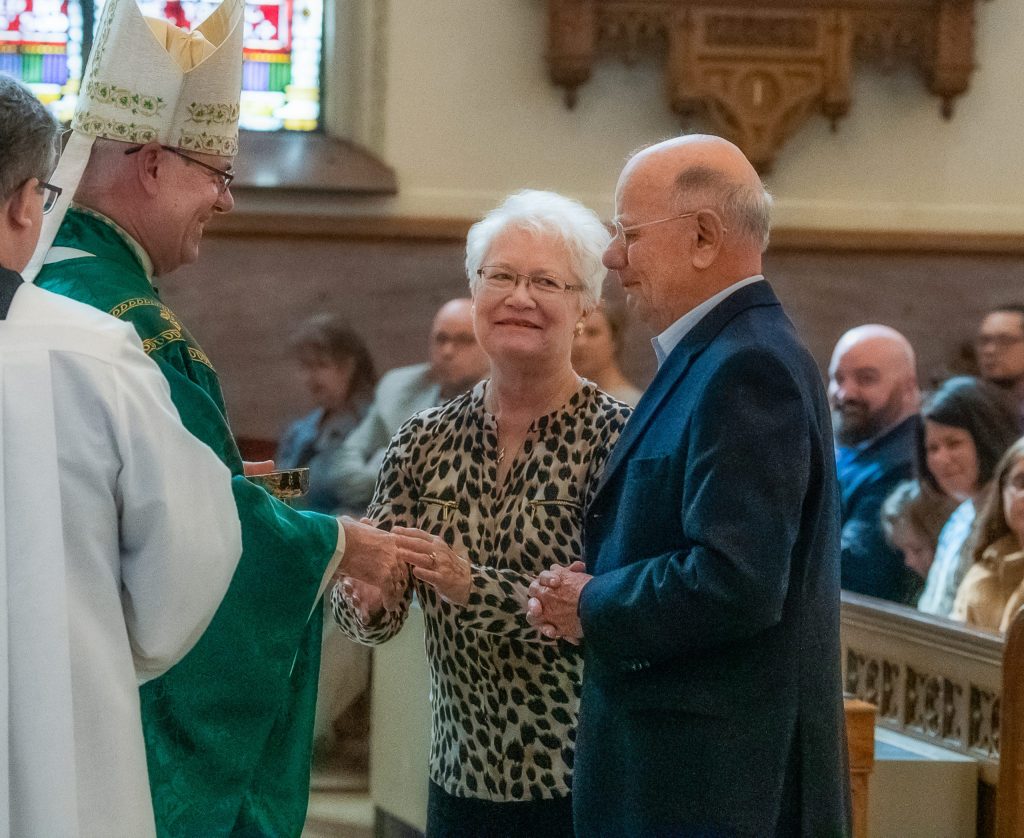 John Martin
Leroy (Lee) and Linda Will present the gifts to Bishop Kevin C. Rhoades at the wedding anniversary Mass at the Cathedral of the Immaculate Conception in downtown Fort Wayne on Oct. 9. The Wills are celebrating 60 years of marriage this year, having met in Nebraska in 1961, and marrying the following spring.

Leroy (Lee) and Linda Will were the gift bearers for the Mass, celebrating their 60th anniversary. They met at the local roller-skating rink in Nebraska where Linda lived at the time and Lee was stationed in the Air Force. Lee was so impressed by her skating skills that he borrowed a friend’s car to drive her home. That was in August of 1961, and they were married in May of 1962.

Linda’s parents were not of the same religion, and she knew she always wanted to marry a Catholic man. Lee shared this sentiment, “We knew it would be easier to raise a family if we were of the same faith.”

Linda added that in marriage, “It’s important to have a sense of humor – it can defuse an argument, and it’s important to apologize or admit when one is wrong. Try to see your spouse’s point of view on matters where you differ. Being united in faith is a blessing on life’s long journey.”

This anniversary Mass is a particularly important one for them. “The Anniversary Mass recognizes marriage as an important vocation,” Linda said. “It’s an honor for all the couples to celebrate with the bishop in our beautiful cathedral. We know we are fortunate to reach these milestone years and to see life continue through our children, grandchildren, and great grandchildren.”

The celebration concluded with a reception held at St. Mary Mother of God Church across the street – a perfect way to honor these Holy Spirit-filled unions.