John F. Gaughan passed away Thursday, March 16, at the age of 89. He lived a lifetime of commitment to education and to Catholic Schools, including serving as a teacher and coach at Bishop Luers High School, principal of Bishop Dwenger High School and assistant director of high schools in the Diocese of Fort Wayne-South Bend.

Born in Evanston, Ill., in October 1927, Gaughan attended high school at St. Bede Academy, Peru, Ill., where he was a member of the football and baseball teams and senior class president.

After graduation Gaughan joined the Marine Corps, during World War II, serving for 5-½ years, including 16 months in North China and nine in Guam. In 1947-48 he was named to the All-Pacific Basketball team.

Upon his return, Gaughan attended Quincy College, graduating in 1953. In 1957, he earned his master’s degree in educational administration from Xavier University.

Gaughan began his teaching and coaching career in his home state of Illinois before joining the newly founded Bishop Luers High School, where he served for eight years as teacher, coach and athletic director. He then returned to his high school alma mater to serve for 12 years as director of studies, while coaching football and basketball. 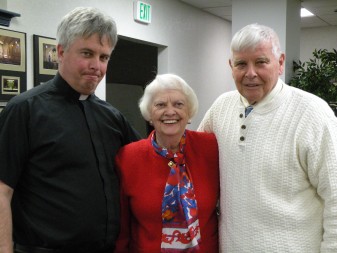 In 1979 Gaughan and his family came back to Fort Wayne to stay. He accepted the position as principal at Bishop Dwenger High School, where he remained for 15 years. After retiring in 1994, he was invited by Bishop John M. D’Arcy to become assistant director of high schools in the diocese, a position he held until December 2009, when he retired at the age of 82.

Gaughan was awarded Indiana’s highest civilian honor, the Sagamore of the Wabash, in 1994 and inducted into the Indiana High School Hall of Fame in 2010.

Adele Nelson, former teacher at Bishop Dwenger High School, remembers Gaughan’s early days as principal. He was incredibly innovative, she said, and driven to make the school to meet state accreditation. He was supportive of teachers and staff, encouraging the advent of many new clubs and activities, including Dwenger’s speech team, which now has over 50 students.

Jason Schiffli, principal at Bishop Dwenger, remembers sitting at the table as he interviewed for his current job. “They asked me how I, as a young person with a family, could manage all the meetings, sports games and extra activities that my predecessor, Fred Tone, did. John Gaughan broke in and said, ‘Jason, don’t answer that. Never forget: God, family, and then comes anything that follows. If you have time, go and see those games and run across town, but these people have to understand that you have a young family.’”

This is exactly how Gaughan lived his live, strongly devoted to his wife, Patricia, and their nine children.

“He put his religion first. He was a very devout Catholic,” said Father Joseph Gaughan, pastor of Most Precious Blood Parish, Fort Wayne, and one of those nine. He credits his father and mother both with his own openness to a vocation. “I think their love for God, it wasn’t just ‘Do as I say,’ it was always ‘Do as I do.’ We prayed the rosary every Sunday night together; I credit them and my Catholic school upbringing with being in my vocation today.”

Mary Keefer, former principal of Bishop Luers High School, also remembers John for his faith. “He was my mentor: a fine, fine man. A good father, a good husband and so knowledgeable and caring about Catholic education. He always did what Jesus would have done, and he always advised us to do the same thing: err on the side of goodness.”

Marsha Jordan, now superintendent of Catholic schools in the Diocese of Fort Wayne-South Bend, was hired by and worked under John while he was principal at Bishop Dwenger. She shared that, “John Gaughan’s legacy is the faith-filled and prayerful life that he lived every single day with no exception, which ultimately impacted everyone around him.”

She remembered: “John could weekly be seen with students, in the early morning before school, walking and praying in front of the abortion clinic in Fort Wayne. He modeled for students his belief in the sanctity of life from conception until natural death. Though as disciplined as a marine drill sergeant, John also had a warm and caring way of connecting with students and faculty.”

She continued: “We all heard John say on many occasions, ‘Potential never scored a touchdown,’ rather, giving a 100 percent of your best effort and perseverance would lead to success. ‘You can’t put the toothpaste back in the tube,’ was another famous saying of John’s that I’m sure made every student stop and think before acting, and is probably remembered with a smile today by many former Bishop Dwenger students and faculty.”

Jodi Marlin contributed to this story.