On the corner of Brooklyn and Hale avenues in Fort Wayne sits a church whose colorful history has gone from “Arrevederci” to “¡Hola!” over a period of more than 100 years.

The beginnings of St. Joseph Church are credited to Loreto Starace from Naples, Italy, who reportedly felt a strong calling to toil as a lay apostle to establish a place of worship for the Italians of the city. 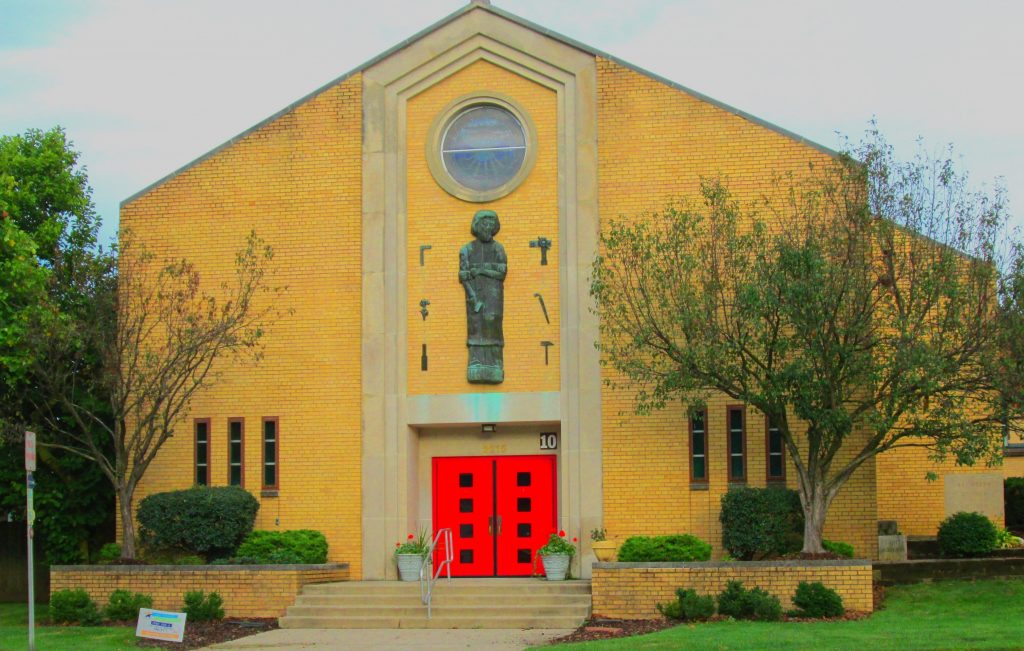 Language was an obstacle for Italians who lived in the area at the time. Starace appealed to Bishop Herman J. Alerding, who appointed Father Monastero to the job of starting an Italian Catholic parish. Father Monastero and Starace also assisted in establishing the Italian Benevolent Society, Pio Decimo, in 1913 for the purpose of helping the sick and bereaved members.

Later, Father Monastero, not satisfied with the slow progress of the church, asked and received a transfer to Chicago. Father Petrilli came to Fort Wayne at his request, to complete the St. Joseph Italian Mission on the corner of Fairfield and Bass streets, and construct St. Joseph Church on the corner of Taylor and Frary streets. The first St. Joseph Church built was a white frame building with a basement, a sacristy and a choir loft, and was dedicated in 1916.

In 1919, Bishop Alerding announced that the church would no longer be an Italian mission, but instead a parish church for all Catholics.

The years 1919-23 were tumultuous, with the church property sold to Westfield Presbyterian Church due to a large debt. “These were very dark days,” said longtime member Jim Hensel. 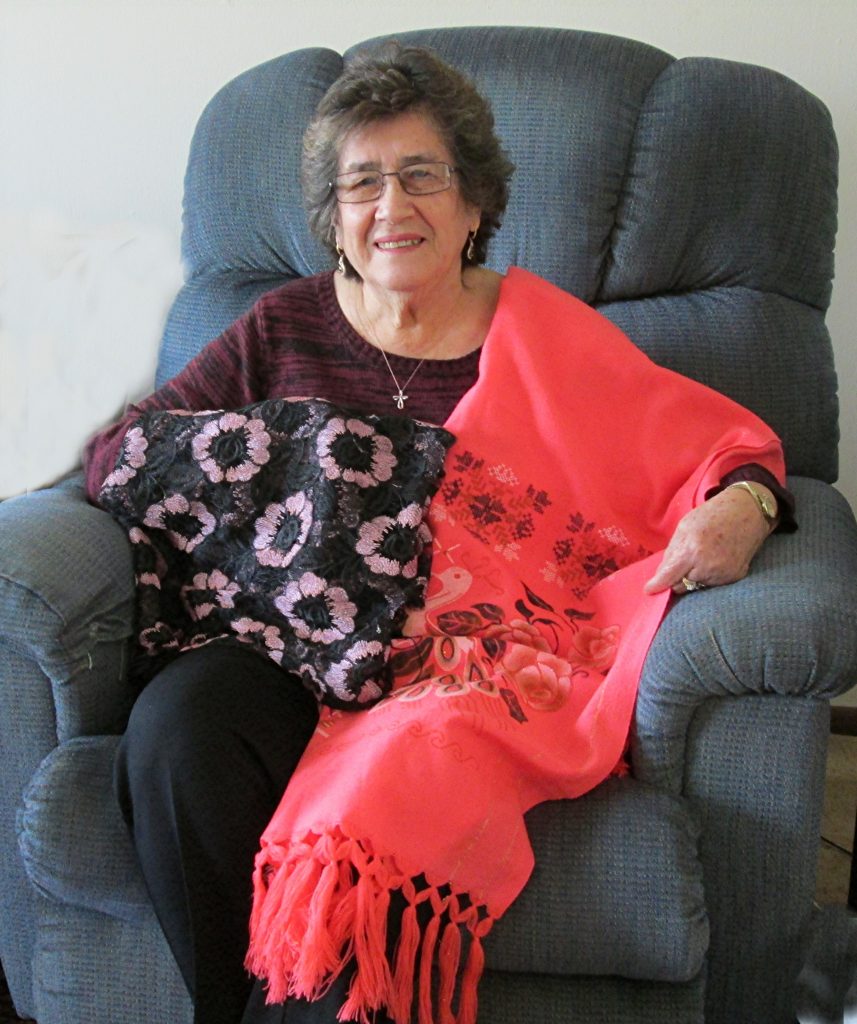 Parishioner Leonor Rodriguez displays a vivid “sarape” or “reboso” that she might wear to religious festivities at St. Joseph Parish. — Photos by Barb Sieminski

The faithful began to scatter, with many flocking to St. Patrick Church until an agreement was reached for the property on which a new church and school would be built for the St. Joseph Catholic Church members. From 1924-28 it was constructed, and two existing homes on the property at the corner of Brooklyn and Hale avenues were converted to a convent and rectory. The new St. Joseph School was staffed by the Sisters of St. Agnes.

The parish struggled through the Depression and World War II, but 1950-55 saw great expansion and growth. By 1962-70, the church had settled into a period of prolonged growth and stability. With the construction of the new St. Therese Parish not too far away, however, many parishioners who lived south of the city left; another challenge came in the late 1980s when St. Elizabeth Ann Seton Church was built on the southwest side of the city.

“The good news is we survived all of those issues and are still a loving, Christ-centered community,” said Hensel.

Vincent and Charlyne Wirtner have been members of St. Joseph since 1962. 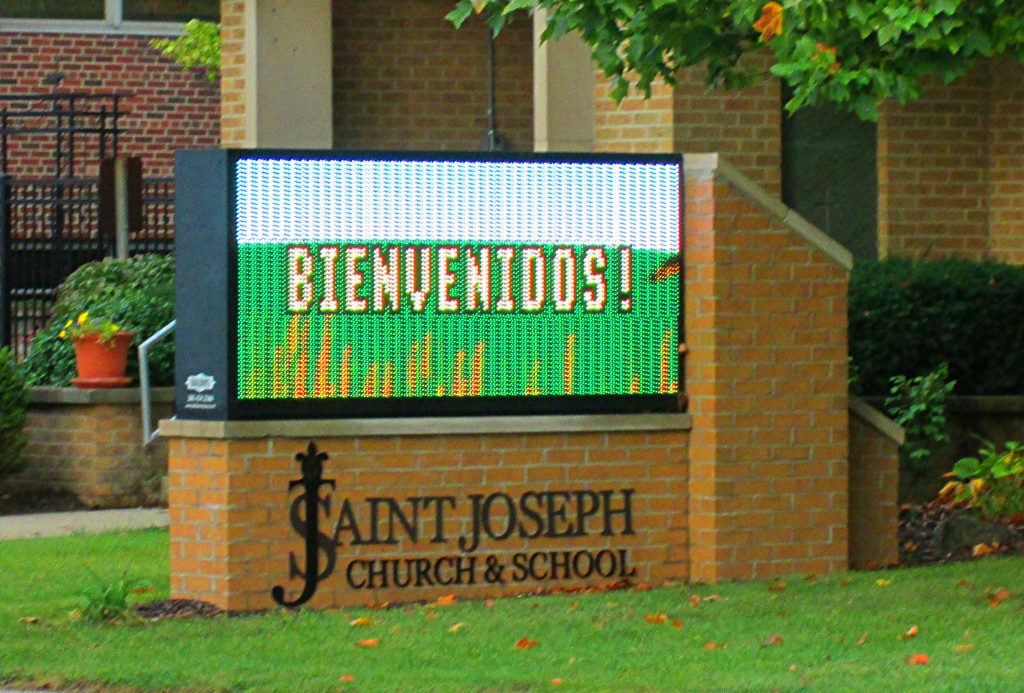 “Sometimes we are referred to jokingly as the pillars of the church,” said Wirtner. “St. Joe has always been a welcoming parish, a strong, blue-collar parish with predominately workers from GE, Slater Steel and Essex Wire, of Italian background. With our west boundary being County Line Road, and development to the west, we became more diversified as parishioners. In the last 10 years we have become even more varied, with the Hispanic influx into our parish community.”

The parish gradually evolved into a mainly Hispanic congregation, with English and Spanish services and very colorful traditions and festivities. Two such celebrations include el Día de Todos los Santos (All Saints’ Day) on Nov.1 and Día de Todos los Muertos, or All Souls’ Day, Nov. 2.

Leonor Rodriguez, an active member of the Hispanic Ministry Committee, is a walking advertisement for her parish.

“I love our Hispanic traditions and holy days,” said Rodriguez. “One of my favorite feast days is the “día de la Virgen de Guadalupe,” on Dec. 12. “On that holy day we have the re-enactment of the special vision during the Mass, and many parishioners dress up with their hair braided and their long, colorful dresses.

“We start the day with mañanitas at 5:30 a.m., with prayer and song, and after about an hour-and-a-half we have champurado (chocolate) and hot cocoa and pastries. Then we go home and return later to prepare the church with the flowers and the food. Then we have Mass at 7:30 p.m., which is standing room only, with liturgical music with Hispanic performers. This year, we will have the honor of having Bishop Kevin Rhoades with us, and we will end with a dinner in the cafeteria. We decorate the parish with a lot of color that day.

“Las Posadas is a novenario occurring in December that commemorates Mary and Joseph looking for room at an inn (posada),” she continued.  “Normally it goes from one home to the other, but instead we do it in the church because of the weather. You have a group of people outside and a group of people inside and the outside group is singing ‘Please let me in,’ and the group inside sings, ‘I’m sorry. We don’t have room.’ And the outside group will go down the line doing the same thing at each door until the last door where they are finally let in. Then we enter and pray the rosary, and have a snack afterwards.”

“Although this parish was founded by Italian families, which were eventually replaced by a large community with German roots, today it welcomes a large number of Hispanic families,” said Father Olivera. “So I am necessarily serving a bilingual community. On Sundays, we have a very well-attended Spanish Mass. During the week, in addition to daily English Mass in the morning, we have a Spanish Mass during the evenings.”

The Hispanic community has great cultural and ethnic variety, said Father Olivera. A word in Spanish has different meanings and uses in different countries, and culture and folklore vary from one region to another. “I must also take into account national sensitivities. All this presents a very interesting, and sometimes a little stressful pastoral challenge that gives a peculiar and enriching taste to parish life.”

“When I first came to St. Joe’s 12 years ago, I felt very welcome,” said Rodriguez. “Now that we have our Spanish Mass, our Anglo friends also come to our services. We’re delighted because we don’t see color, and we welcome others as we have been welcomed. For after all, are we not all one body in Christ?”

Reconciliation: Saturday — 9 a.m. until finished or by appointment