Former Catholic Relief Services CEO Carolyn Yauyan Woo believes businesses can lead positive change in their community and world, but their impact depends on the values and morals of the people they employ.

“I actually see business as the vehicle where social agendas are moving through,” Woo told a record crowd of about 330 people during the University of Saint Francis’ eighth annual Servus Omnium Lecture Feb. 25 at the university’s Goldstine Performing Arts Center in downtown Fort Wayne. Bishop Kevin C. Rhoades attended and led the opening prayer for the breakfast event.

The lecture series focuses on how people can bring their faith into the workplace, said Lance Richey, an event co-founder and USF’s vice president for academic affairs. Servus Omnium means “servant of all,” which is how St. Francis of Assisi described himself in letters to fellow members of the religious order he founded, Richey said.

Woo brought a wide range of experience to discussing the topic “Business as a Force for Good.”

After graduating from Purdue University in West Lafayette, she stayed at the university to teach and to work in administration. She served from 1997-2011 as dean of the Mendoza College of Business at the University of Notre Dame before leading Catholic Relief Services from 2012-17. She currently serves at Notre Dame as the president’s liaison for energy transition away from fossil fuels.

Woo began her lecture by recalling a question a Notre Dame student asked her after a talk by one of the many corporate CEOs that university brings in to speak with students. 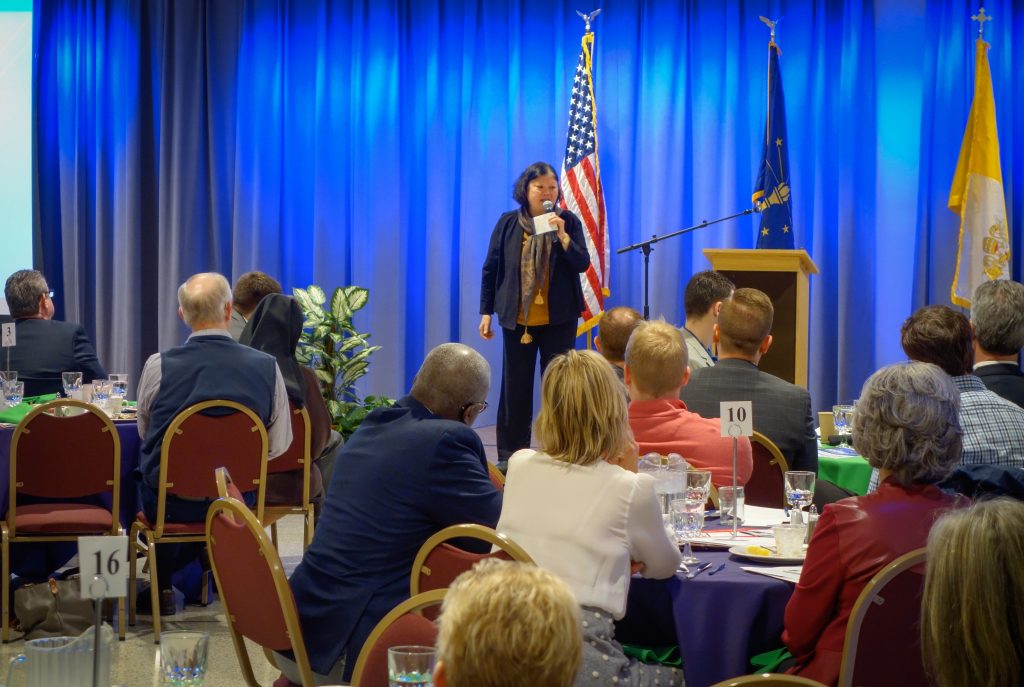 Carolyn Yauyan Woo, former CEO of Catholic Relief Services and dean of the Mendoza College of Business, speaks on “Business as a Force for Good” during the Servus Omnium lecture.

The speakers all urge students to “do the right thing,” the student told Woo. Do you think they always did the right thing while building their careers to where they are now?

“The bottom line is, why would a question like this come from a young person?” she asked. The answer is because young people have seen bad behavior by businesses.

“In our culture, cheating is very embedded,” Woo said.

People often make excuses to allow themselves to go along with cheating, she said. That includes believing the means used are justified by the end result or that no one was hurt by the cheating.

However, Woo said business also can be a strong force for good.

People are created to live and interact with others, she noted. Businesses are a mechanism for the orderly exchange of goods and services between people. They also can influence change on social issues such as racism, fair treatment of people and care for God’s creation.

For those efforts to succeed, people must choose to do good, she continued. That includes business owners and leaders setting a good example for their employees.

Catholic social teaching and Church leaders recognize the potential of business as a force for good, she said. Pope St. John Paul II, for example, offered thoughts on appropriate ways to gain wealth. Pope Benedict XVI described markets as neither good nor bad, but dependent on the ethics of their leaders. And Pope Francis warned of business’ ability to exploit but also said it can play an important role in creating good jobs for people. “One of the world’s biggest problems is underemployment of youth in Asia and Africa,” Woo noted. 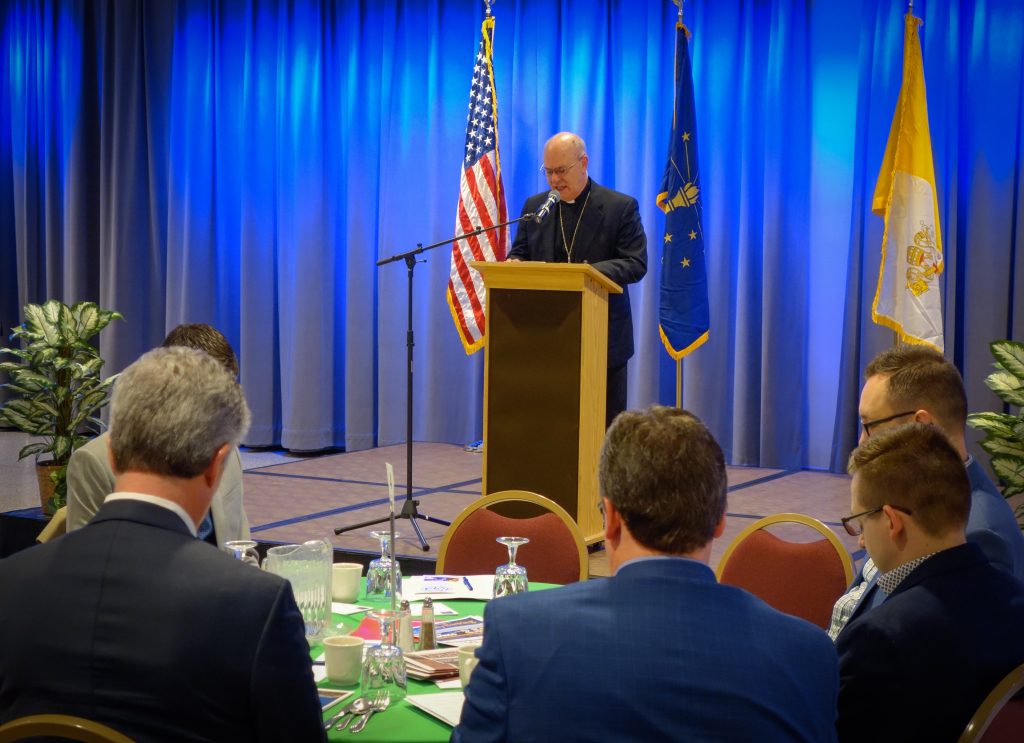 Photos by Kevin Kilbane
People bow their heads as Bishop Kevin C. Rhoades offers a prayer before the start of the University of Saint Francis’ Servus Omnium lecture and breakfast, which took place Feb. 25 at the university’s Goldstine Performing Arts Center in downtown Fort Wayne.

She ended her address by answering a few questions from the audience.

In one response, she said the use of microfinancing to provide small grants or loans to low-income people sounds like a great idea; however, Catholic Relief Services has found it was overly risky in many places because people requesting the funds didn’t have the training or knowledge to manage the money and make the best use of it in their small business.

When asked how to act when a business competitor’s cheating starts to hurt one’s own company, Woo asserted that cheating is not a sustainable model. “It is a race to the bottom.” Rather than joining in and behaving unethically to protect the company, she recommended studying and understanding your firm’s long-term options and whether it should exit the present line of work and look for viable alternatives.

Another person asked about children seemingly growing up without learning virtues and moral character in school. While that can happen, Woo said, children also can learn values through other institutions: by growing up in a small, close-knit community or participating in Scouting or sports programs that aren’t overly competitive.

Scripture is a guide to developing good values, but it isn’t enough, she said. Young people learn values, ethical behavior, kindness and generosity from being the recipient of them and by witnessing other people practice them.

“You need to think about who you want to be and who is your best self and what you want that to look like,” she said.