When people speak fondly about the former Central Catholic High School in Fort Wayne, they often talk about the camaraderie.

Catholic teens from around the city and outlying area came together in one place to grow in faith and life, and to cheer on their Fighting Irish athletic teams. Many students followed parents, grandparents, and other relatives to the school, creating a strong sense of community, said Kathryn Imler, a 1968 Central Catholic (CC) graduate who now preserves and shares some of the school’s history as Director of the Diocese of Fort Wayne-South Bend’s Diocesan Museum in Fort Wayne. 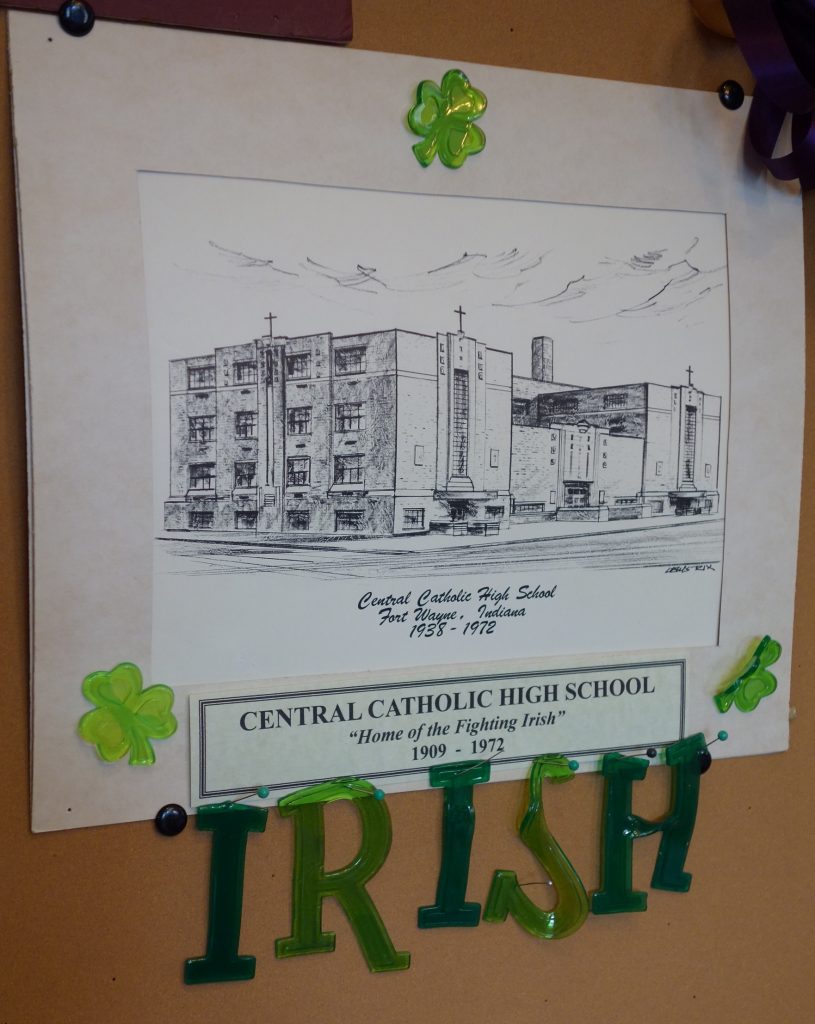 “The pride and sense of loyalty was ingrained all the way up,” Imler said of the strong family connections. Her father attended CC, and four of her six siblings also either graduated from CC or attended there before it closed.

When Central Catholic opened in 1938, it became the city’s first co-educational Catholic high school. Previously, boys had gone to an all-boys school called Central Catholic that was located in the southwest corner of Cathedral Square on land now occupied by St. Mother Theodore Guerin Chapel. Girls attended St. Augustine Academy, which was located on the northwest corner of Cathedral Square on ground now containing the Diocesan Museum.

Archbishop John F. Noll saw the need for a Catholic high school serving both young men and women, said Leanne (Oddou) Mensing, who attended CC from 1952 to 1956 and is a grand-niece of Bishop Noll.

“He thought education was important for everybody,” recalled Mensing, a past president of the Central Catholic Alumni Association and its current vice president. 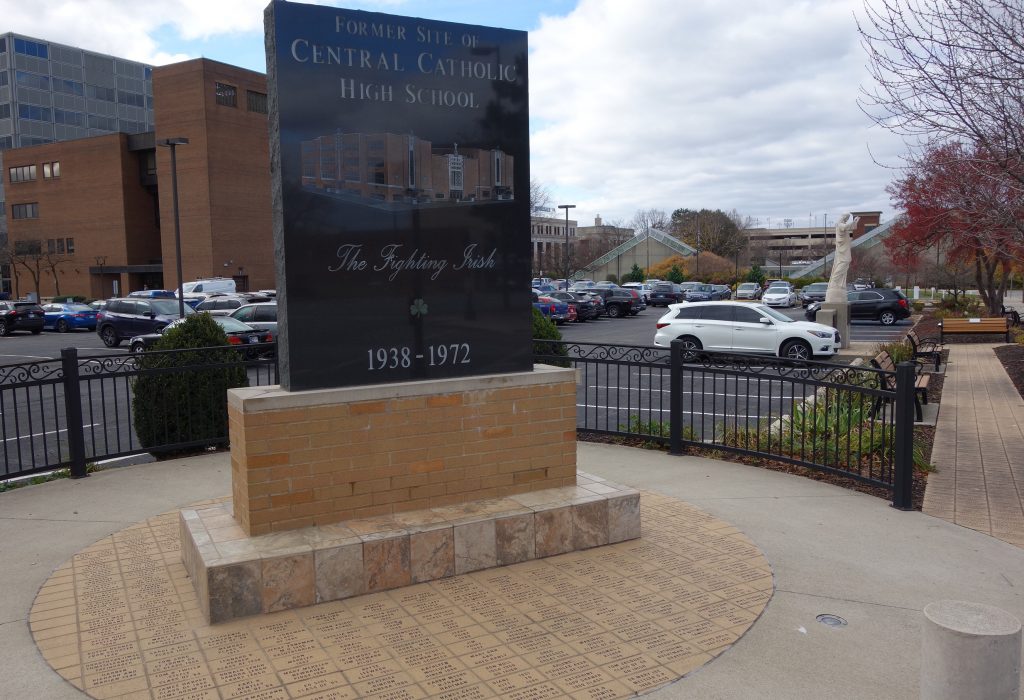 Students also were united by their shared faith and ideology, Imler said. Many students — especially boys — also had the common experience of playing Catholic Youth Organization sports in elementary school, she said. CC offered only gym and intramural basketball for young women.

“When I came back here, it was a good feeling to see kids I went to grade school with,” said Mark Linker of Huntington, a 1968 CC graduate. Linker grew up in Fort Wayne, but his family spent his seventh- and eighth-grade school years in Nebraska before returning home.

Now the current President of the CC Alumni Association, he has fond memories of the camaraderie inspired by the school’s athletic teams. He also enjoyed his teachers and the students’ many attempts — usually unsuccessful — to play tricks on them.

His wife, Vickey, also attended CC, graduating in 1969. She coordinates membership in the alumni association.

Nearly 400 CC graduates belong to the alumni association as either lifetime or annual members, Mark Linker said. People who graduated in the 1940s and 1950s make up the largest group, he added.

“It was a very positive place,” Mensing recalled.

Diocesan priests served on the school faculty along with women religious from the Sisters of Providence, School Sisters of Notre Dame, and Poor Handmaids of Jesus Christ orders, she said. Teachers were always willing to help students.

“I think the high level of education expected of us was good for everyone,” she said.

They also had a lot of good times, she added. 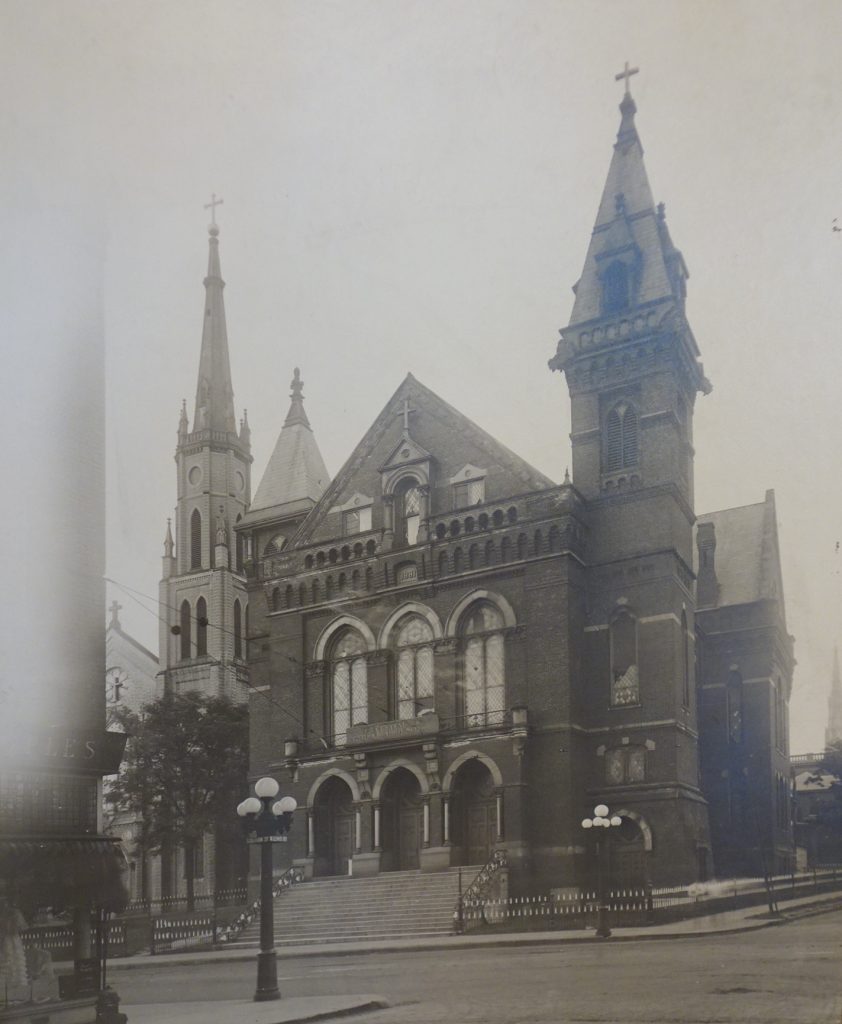 Some of her favorite memories include football games, dances after football games, play performances, and watching boys dash out at lunchtime to avoid parking tickets by moving their cars, which were parked in metered parking spots on streets around the school. During study hall in the library, she remembers boys trying to flip pennies into the chandeliers. CC’s first-floor windows also let students slip out to sneak over to public school Central High School across Clinton Street, or were used by Central students to sneak into CC.

“It was a place you wanted to go every day,” Mensing said. “It was fun!”

Back then, a lot of students didn’t have jobs after school and very few had cars, so they didn’t have things that pulled them away from school after class, Imler said. Most extracurricular activities took place at CC, which added to the sense of community.

“It’s a good feeling to feel a part of something,” she noted. 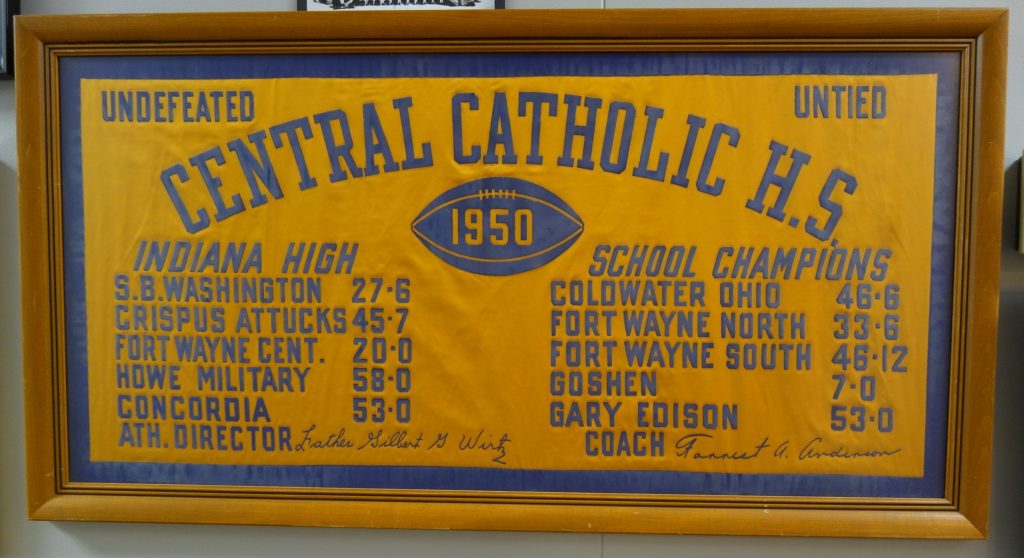 This banner at the Diocesan Museum in Fort Wayne honors the 1950 Fighting Irish football team from Central Catholic High School in Fort Wayne, which capped an undefeated 10-0 season by being one of the teams named state champion by some media and other sources. At that time, the Indiana State High School Athletic Association didn’t have a state football tournament to determine a state champion on the field.

Central Catholic sports teams also had success. The 1950 football team was one of several teams named state champion that year by various sources. At the time, the state didn’t have a football tournament to crown a true champion. The boys golf team also won the state championship during the 1958-1959 school year.

The 1939 and 1940 boys basketball teams also won state and national Catholic schools championships, Allen County Historian Tom Castaldi wrote in a 2015 article in Fort Wayne magazine. At the time, opposition from the Ku Klux Klan prevented Catholic schools and some other schools from participating in Indiana state high school tournaments.

Ironically, CC’s growth eventually may have contributed to its decline. The school was landlocked, so it couldn’t expand. The diocese added a fourth floor in the 1950s, but eventually decided to build additional Catholic high schools.

CC enrollment had grown to more than 1,400 students in 1956, when Bishop Leo A. Pursley launched a fundraising effort to build two new Catholic high schools in Fort Wayne: Bishop Luers High School on the south side and Bishop Dwenger on the north side, according to the Bishop Luers website.

Bishop Luers opened in 1958, and Bishop Dwenger welcomed its first students in 1963.

The two schools’ locations put them closer to where people lived and slowly eroded enrollment at CC, Mensing said.

The CC building also had begun to show its age, Linker said. “There wasn’t anything I think the diocese could have done to change it,” he said.

“It was sad, very sad, but time marches on,” Mensing said.

After CC closed, the diocese used the building for a limited time to house refugees being resettled here, Mensing said. The school was demolished in 1984, and the site became a parking lot.

Alumni marked the 50th anniversary of the closing with a jubilee event this summer.

The spirit of Central Catholic lives on, however, in former students’ memories and through alumni association events. Alumni also planned and funded a memorial plaza on the southwest corner of Lewis and Clinton streets to commemorate where CC once stood.

In addition, people can view CC memorabilia at the Diocesan Museum, diocesan archives, Bishop Luers and Bishop Dwenger high schools, and at the CC Alumni Association office in the Redeemer Radio building on State Boulevard in Fort Wayne.

Alumni from Central Catholic Share a Few of Their Treasured Memories with Today’s Catholic:

I invited Julio Garcia for Christmas dinner in 1966. We married in 1970 and have eight children and twenty grandchildren.

Running track with Coach Delaney. After it, we would go get Blue Moon root beers on Clinton Street. Larry was center for the football team all four years in high school.

CCHS is where I met my best friends and had so much fun.

In 1962, the influx of the “Peter Pan Boys” from Cuba caused a lot of excitement among the girls. They were fun, cute, and always looked for ways around the rules, much to the consternation of our straight-laced nuns!

Stage crew instead of sitting in the bleachers.

A Catholic education has had a long impact in my life. I actually taught in the Catholic school system for more than 30 years.

My memories of Central Catholic High School are wonderful. I didn’t attend CCHS, but my brother did. We went to many CC band and orchestra concerts. Joe Woods was a great music director.