Maclaine Capshew enjoyed sorority life at Indiana University in Bloomington and made some of her closest friends during her four years there.

Capshew, now, 22, lived her Catholic faith but also found it easy to get caught up in the partying and in efforts to be popular with people and on social media.

The South Bend-area resident’s perspective changed during her junior year. In 2017, missionaries from the Fellowship of Catholic University Students began work at the IU campus. She bonded with one of the young female missionaries, who held her accountable and who reminded her she was born to be a saint — and that her greatest worth was as a daughter of God.

“The closer I grew toward the Lord, the more aware I was of acting against him in terms of sin,” Capshew said during a phone interview from University of South Dakota in Vermillion, where she now serves as a FOCUS missionary. 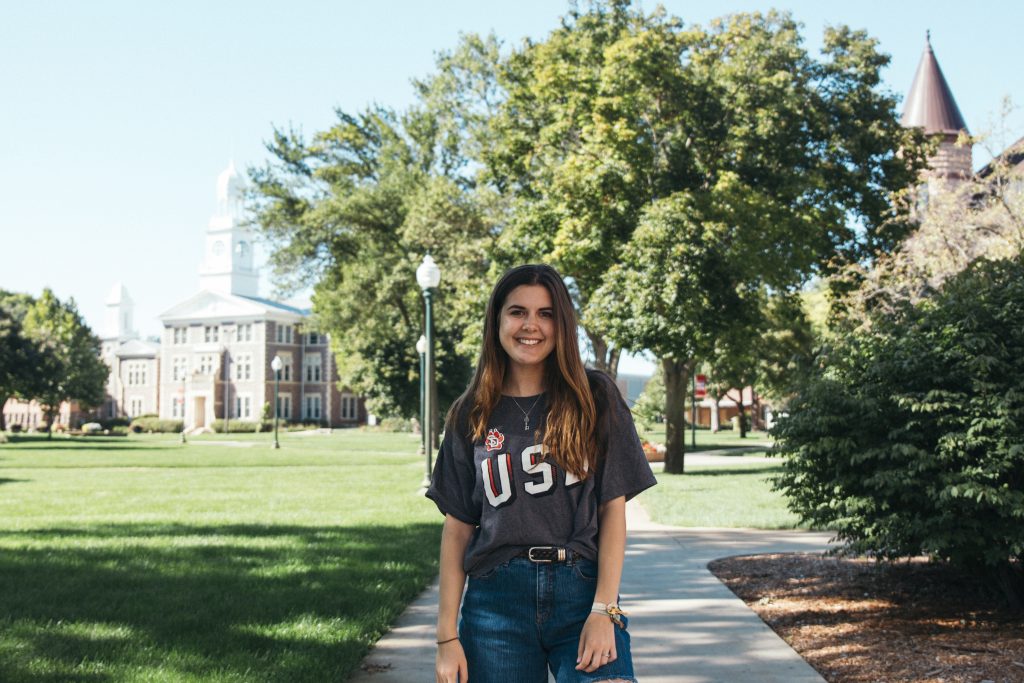 Maclaine Capshew, whose home parish is St. Pius X in Granger, now serves as a Fellowship of Catholic University Students missionary at University of South Dakota. FOCUS missionaries reach out to college students, help them grow in faith and send them out to share the faith with others. — Provided by Maclaine Capshew

Founded in 1998 at Benedictine College in Atchison, Kansas, FOCUS sends missionaries to reach out to college students, build them up in the Catholic faith and then send them into the world to share that faith with others. FOCUS also organizes missions trips and conferences.

The missionaries, who must raise their own financial support and often are recent college graduates, agree to go to any campus at which they are needed.

In most cases, FOCUS missionaries serve at the invitation of a college’s Newman Center and work closely with it. Newman Centers offer Mass and other pastoral care to Catholic students at non-Catholic colleges and universities.

FOCUS currently has more than 730 missionaries serving 164 colleges and eight parishes, Capshew said. Most sites are in the United States. They include IU, Ball State, DePauw, Valparaiso and Indiana University-Purdue University Indianapolis campuses in Indiana.

Capshew, whose home parish is St. Pius X in Granger, is one of more than 150 FOCUS missionaries who work with members of sororities and fraternities at the campus where they are assigned.

After graduating from St. Joseph High School in South Bend, she pursued a degree in elementary education with a fine arts minor. She planned to work as a teacher after her graduation this past spring.

Through interaction with her FOCUS mentor during her junior year, however, Capshew felt called to join their work. An internship that summer at the conference where new FOCUS missionaries receive their training confirmed her feelings.

Capshew said her first three weeks at USD have been extremely busy but rewarding.

“We take a relational approach,” she said. “We model evangelization the way Jesus did, which is through his friendships.”

To connect with and encourage students, they go to coffee with them, organize community trivia nights, play yard games and attend campus events, she said. The goal is to create a lasting relationship, not a chance encounter.

Capshew and a missionary teammate also introduced themselves and offered contact information to the presidents of all the sororities at USD.

She and the other FOCUS missionaries have tremendous impact because they go out and introduce students to kindness, respect and aspects of Christian life that are an entree to the love of Jesus, Father Steven Jones, chaplain at the Newman Center at USD, said in a phone interview.

About a third of USD’s 2,000 to 3,000 on-campus students are Catholic, Father Jones said. The Newman Center there offers daily Mass, Bible studies, meals, reconciliation and social activities. FOCUS missionaries connect students to those activities and the Catholic community. They also disciple students so they grow in their faith.

“It is a real point of light for our students,” Father Jones said of the Newman Center.

College is an exciting time for young people and, for most, their first taste of real freedom, Capshew said. That can lead people to try new things and sometimes to make mistakes.

The only way for students to know more about themselves, she said, is to remember that God created them and He has given each of them a calling in life. Not everyone will be canonized a saint, but everyone can strive to be potential candidates for sainthood, she added.

Looking ahead, Capshew said it’s too early to tell where her faith journey will lead her.

“I’m very passionate about working in the Church and restoring beauty in the Church,” she said. “Whatever way God calls me to share Him and spread Him, I am open to do. I feel that everyone is called to be a missionary in whatever career they have.”

To learn more about the FOCUS missionary program or to support a missionary on a college campus, go to www.focus.org.