The first Mass celebrated in Auburn took place in the home of Engelbert Ashley in 1871. Visiting priest Father August Young celebrated Mass for the fledgling Catholic congregation of around 10 families. Thus began Immaculate Conception Parish in 1872. Services continued in the home for the next two years, before the foundation was laid for a new church on Fourth and Railroad (now Indiana) Streets. A few years later, in 1881, grounds for a cemetery were purchased.

A new church was completed in 1913. The parish, however, continued to grow and, before 50 years had passed, dedicated a new church, school, and parish hall in 1958. The school began with grades 1-4, adding a grade each year until 1962. Unfortunately, in the early 1970s, the school was forced to close as the Franciscan Sisters of the Sacred Heart at Joliet, Illinois, who had staffed the school, left and the parish could not afford the expense of hiring lay teachers.

Even with the closure of the school, Immaculate Conception remained a thriving parish, boasting at least two vocations to the religious life for sisters of the parish and one priestly vocation, Father Mark Gurtner, Vicar General for the Diocese of Fort Wayne-South Bend. He was one of four priests who concelebrated Mass on Saturday, Oct. 8, when Bishop Kevin C. Rhoades came to visit and close out the year of celebration for Immaculate Conception. Also in attendance was Father Timothy Wrozek, who retired from pastorship last year, and Father Mark Enemali, CSSp, who was officially installed as pastor that day. 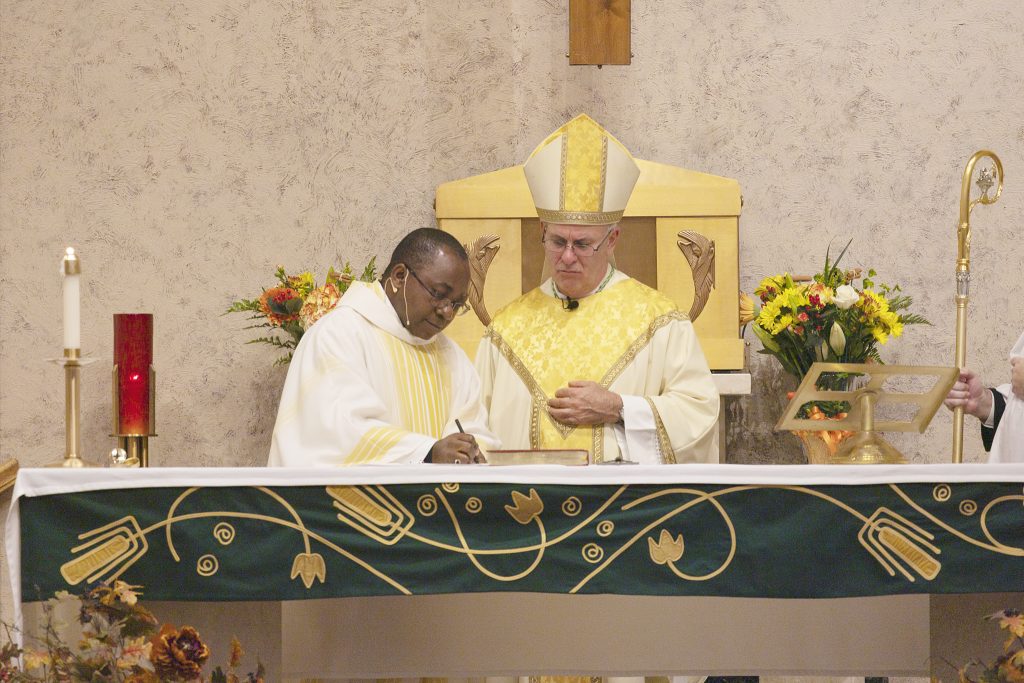 The parish anniversary celebration actually began earlier this year when Bishop Rhoades visited in January to celebrate Vespers on the Feast of the Baptism of the Lord, in “a wonderful kickoff to the sesquicentennial,” said Jeanine Kleber, the organizer of the 150th anniversary celebration. Organizing the festivities has been a collaborative effort over the last three years, as preparations began under Father Wrozek’s leadership. The parish prayer that has been incorporated into Sunday Masses for the last year was written by Father Wrozek and fine-tuned by Father Enemali. In May, the music director organized a rosary which was sung by parishioners. Kleber called that event “breathtaking and moving. … Of course, it’s Immaculate Conception, so it tied it all together.”

She wanted to end the celebration with a nod to the pioneering families who first established the parish in the Ashley home with a dinner reflecting the types of foods that such families would have enjoyed 150 years ago. “It is just such a wonderful start to our parish when you imagine meeting in someone’s home and it just grew,” she commented, beaming. 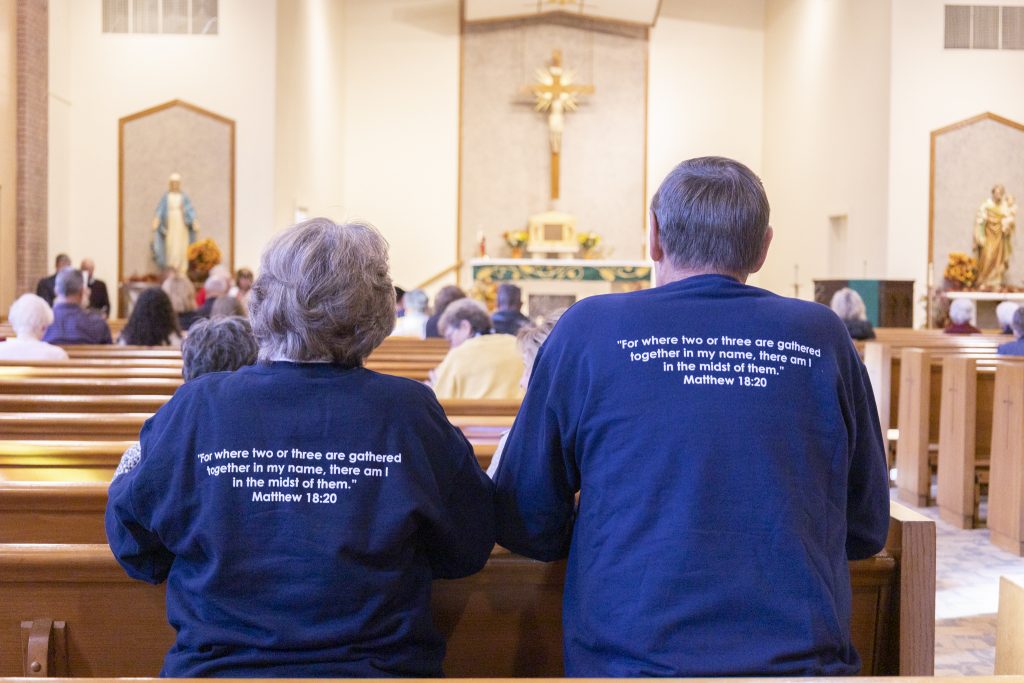 Part of the celebration included the creation of parish shirts and a visual history of the parish through the years.

Young and old, relative newcomers and longtime parishioners such as Kleber, a third-generation member, form the backbone of Immaculate Conception Parish. Even those whose ties to the parish go back less than 20 years came to celebrate the milestone with their fellow parishioners.

Immaculate Conception’s welcoming spirit is not limited to the town of Auburn. The parish maintains close ties with its sister parishes of St. Michael the Archangel in Waterloo and St. Joseph in Garrett, Kleber added.

Father Enemali has served as parish administrator for the past year and has grown familiar with the parish, calling it “flourishing.” Of his congregation, Father Enemali said, “It’s a wonderful community, the people are very devout, they care about the faith, they love the Church. You find people really willing to serve, happy about the faith.” From charitable organizations like the St. Vincent de Paul Society and the Knights of Columbus to liturgical groups like the choir that performed at Mass, Father Enemali happily reported that those who volunteer within the parish do so “with their heart.”

Many parishioners congratulated Father Enemali after Mass and welcomed him to a more permanent position as pastor.

One thing that he has found great joy in over the past 14 months is the amount of baptisms he has been blessed to perform. “I’ve had so many baptisms, infant baptisms, since I’ve been here. It’s just wonderful. We have many young families, we have the elderly, too, many retired, different groups.” 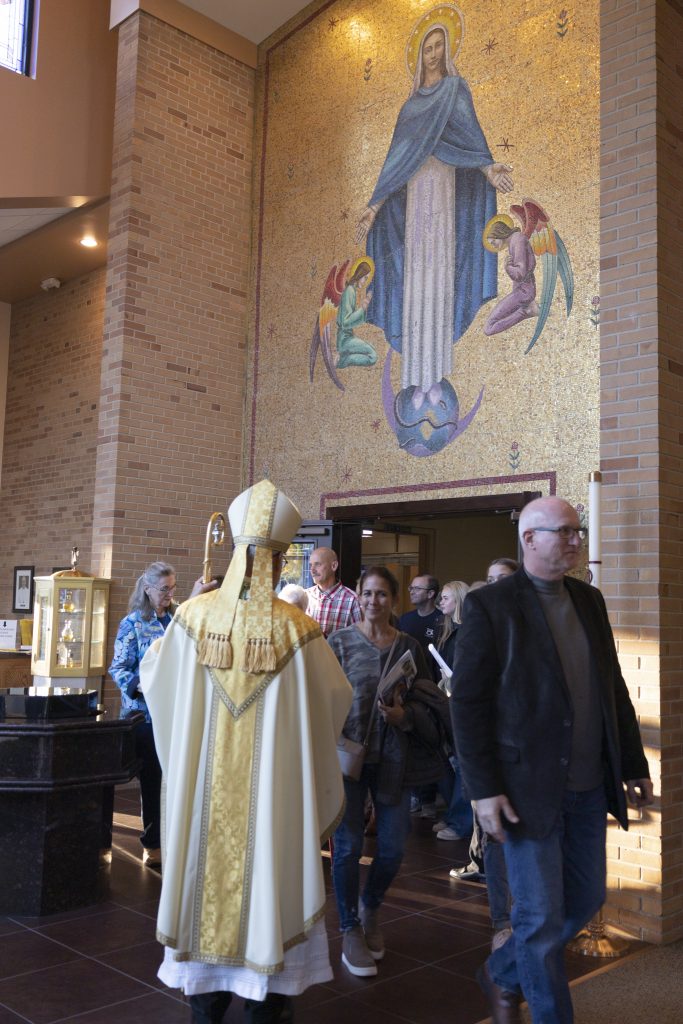 Photos by Jennifer Barton
On the close of the 150th anniversary celebration of Immaculate Conception Parish in Auburn on Oct. 8, Bishop Kevin C. Rhoades installed Father Mark Enemali, CSSp, as pastor of the parish.

His gratitude for being able to serve the Catholic population of Auburn fit the theme of Bishop Rhoades’ homily for the day. After giving a brief history of the parish, Bishop Rhoades said, “I was thinking how appropriate the readings of this 28th Sunday in Ordinary Time are for our celebration today because they focus on the theme of thanksgiving. We give thanks today for all God’s blessings during these past 150 years here at Immaculate Conception Parish – all the graces received here through the preaching of God’s word and the celebration of the sacraments.”

He then spoke about the Gospel reading for the day, when Jesus cured the 10 lepers, yet only the Samaritan man returned to thank Him. “The message for us today is very clear. Do we practice the virtue of gratitude in our lives or are we at times remiss or even ungrateful? Perhaps the nine lepers just forgot about Jesus in the midst of their excitement at being cleansed. Perhaps we forget or take for granted the many gifts we receive every day from God.”

Then he reminded those present that the ultimate form of thankfulness is the prayer of the Mass itself. “For 150 years, the parishioners of Immaculate Conception have given thanks to God in the celebration of the Holy Eucharist. And we do so at this Mass with special gratitude for the gift of faith, received and nourished here for 150 years.

“We must not forget that we also give thanks by being generous to others, by sharing God’s gifts, especially the gift of faith, with others. We are called to imitate God’s generosity to us. A grateful person is a generous person. And how many grateful and generous people have built up this parish community through the years and still do today. So I encourage you to continue in this spirit of gratitude and generosity.”