MIAMI (CNS) —Miami Archbishop Thomas G. Wenski urged community members to come together “to support one another in this time of grief” after a shooting rampage Feb. 14 at a Broward County high school left at least 17 people dead and at least 14 injured.

“With God’s help, we can remain strong and resolute to resist evil in all its manifestations,” the archbishop said in a statement. “May God heal the brokenhearted and comfort the sorrowing as we once again face as a nation another act of senseless violence and horrifying evil.”

In a late-night telegram to Archbishop Wenski, Pope Francis assured “all those affected by this devastating attack of his spiritual closeness.”

“With the hope that such senseless acts of violence may cease,” he invoked “divine blessings of peace and strength” on the South Florida community. 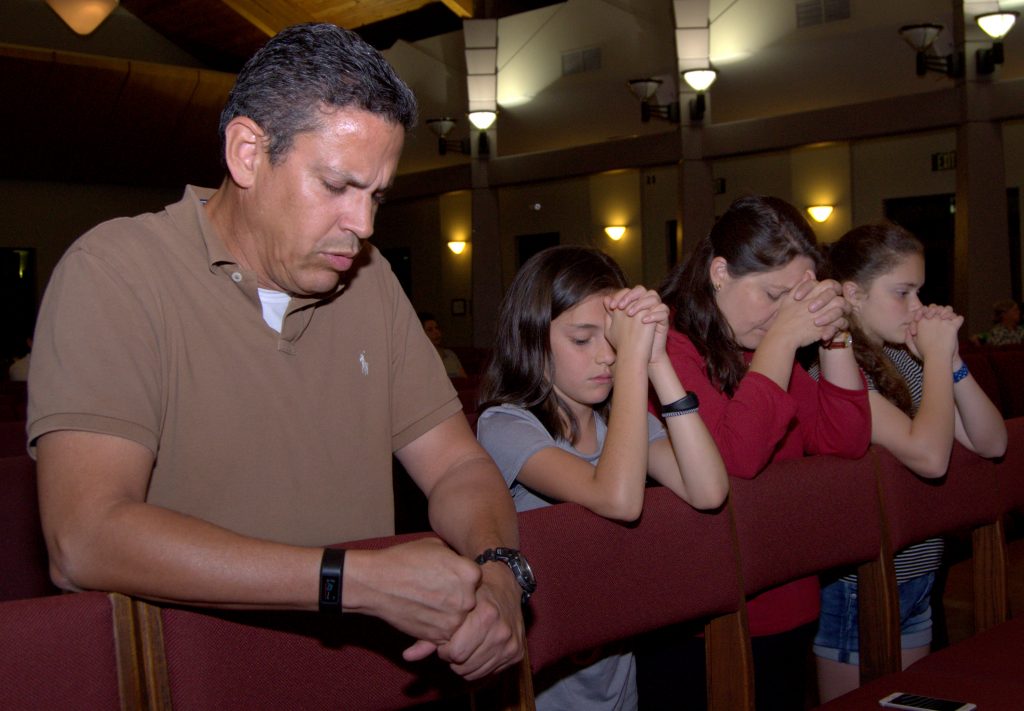 Marcos and Luz Gonzalez pray alongside their daughters, Sabrina and Laura, far right, Feb. 15 at Mary Help of Christians Catholic Church in Parkland, Fla. The family and others were attending a prayer service for victims of the mass shooting Feb. 14 at nearby Marjory Stoneman Douglas High School. (CNS photo/Jim Davis for the Florida Catholic)

Cardinal Daniel N. DiNardo of Galveston-Houston, president of the U.S. Conference of Catholic Bishops, called for prayer and healing. He urged all unite their “prayers and sacrifices for the healing and consolation” of those affected by the violence in South Florida and for a society “with fewer tragedies caused by senseless gun violence.”

Law enforcement officials identified the shooting suspect as 19-year-old Nikolas Cruz, who had been expelled for disciplinary reasons from the school where he opened fire — Marjory Stoneman Douglas High School in Parkland.

On the afternoon of Feb. 14, Cruz allegedly went on the shooting rampage shortly before school was to let out for the day. He was apprehended about an hour after shots were reported at the school. He is being held without bond on 17 counts of first-degree premeditated murder in the attack. 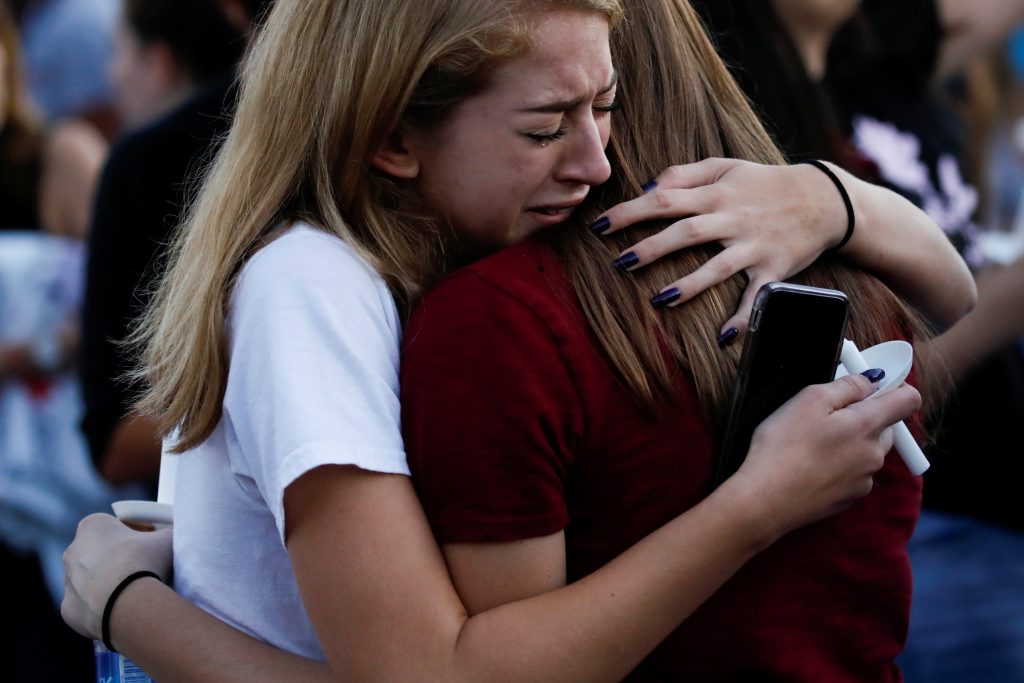 Students mourn during a candlelight prayer vigil Feb. 15 for the victims of a mass shooting at nearby Marjory Stoneman Douglas High School in Parkland, Fla. At least 17 people were killed in the Feb. 14 shooting. The suspect, 19-year-old former student Nikolas Cruz, is in custody. (CNS photo/Carlos Garcia Rawlins, Reuters)

The suspect carried an AR-15 rifle and had “countless magazines,” Broward County Sheriff Scott Israel said. He also told reporters that of the 17 fatalities, “12 people died in the school, two were killed outside the school, one died on the street and another two died at the hospital.” Several others were transported to the hospital. Details about the shooter’s motive were still being pieced together.

Thousands of mourners remembered the victims at a candlelight vigil held near the high school the evening of Feb. 15. Still others attended a prayer service at Mary Help of Christians Catholic Church in Parkland.

Earlier in the day Broward County Superintendent Robert Runcie called the school shooting “a horrific situation. It is a horrible day for us.” Florida Gov. Rick Scott said, “This is just absolutely pure evil.”

Pope Francis was “deeply saddened to learn of the tragic shooting,” Cardinal Pietro Parolin, Vatican secretary of state said in telegram he sent to Archbishop Wenski on behalf of the pope. “He prays that Almighty God may grant eternal rest to the dead and healing and consolation to the wounded and those who grieve.”

“We are deeply saddened by the shootings in Broward County, Florida, and by the needless and tragic loss of life,” Cardinal DiNardo said in his statement. “May the mercy of God comfort the grieving families and sustain the wounded in their healing.

“Catholics and many other Christians have begun the journey of Lent today,” he said. “I encourage us to unite our prayers and sacrifices for the healing and consolation of all those who have been affected by violence in these last weeks and for a conversion of heart, that our communities and nation will be marked by peace. I pray also for unity in seeking to build toward a society with fewer tragedies caused by senseless gun violence.”

Archbishop Wenski added in his statement: “This Ash Wednesday, we begin our Lenten Season that calls us to penance and conversion. With God’s help, we can remain strong and resolute to resist evil in all its manifestations.”

Via Twitter, various U.S. bishops offered condolences and urged for something to be done to stop the violence.

“We must prevent those who are mentally ill from access to deadly firearms,” said Boston Cardinal Sean P. O’Malley. “We can and must do better for each other by coming together as a society with the resolve to stop this senseless violence.”

News reports said the suspect had been in treatment for depression but had stopped seeking help.

Bishop Richard J. Malone of Buffalo, New York, via Twitter reminded others of St. John Paul II’s warning 25 years ago that Western society is becoming a “culture of death.”

“Sadly, he was right. Can we join together and reverse this?” he asked.

Various reports said the suspected shooter had recently lost his mother and was living with a friend’s family while dealing with depression.

Trump also expressed condolences to families whose children died in the massacre.

“To every parent, teacher and child who is hurting so badly, we are here for you, whatever you need, whatever we can do, to ease your pain. We are all joined together as one American family and your suffering is our burden also,” Trump said. “No child, no teacher should ever be in danger in an American school. No parent should ever have to fear for their sons and daughters when they kiss them goodbye in the morning.” Amid the outpouring of sympathyand calls for gun control and other action to stop mass shootings was a statement from the Sisters of Mercy. The community said its members were united in prayer and expressed grief, sympathy and love for “the victims, the families and the witnesses whose sense of safety in their schools has been irrevocably broken.” “However, we acknowledge that our prayer alone is not enough. Our faith and mercy tradition call us to unceasingly decry the industries, systems and culture that enable this terrible hate and violence,” the sisters said in a statement.

They questioned how the more than 300 school shootings reported since Sandy Hook in 2012 could occur “when the entire country was outraged” following that horrific massacre in Connecticut.

“When will this stop?” they asked. “We will raise our individual and collective voices to speak out against legislation, the gun lobby, industry and organizations that promote and perpetuate a culture of hate and violence.”

In Pennsylvania, Greensburg Bishop Edward C. Malesic said: “Prayers are powerful, and prayers are a necessary part of any Christian response to evil. But we have to start taking action to stop this carnage.”

“Pray to God that in addition to helping the victims and their families heal from this unimaginable tragedy, that he burn in your heart the courage to stand up and combat this problem,” he continued, “whether it is by advocating for better mental health services, working to help end bullying in our schools, responding to the needs of boys and young men so they don’t see a gun massacre as a solution to their problems, working to promote respect for life, and, yes, advocating for common sense gun laws.”