VATICAN CITY (CNS) — Pope Francis seems to be fixated on the wounds of Christ. And he has suggested that other Catholics might want to be as well.

He has offered meditations on Jesus’ pierced hands, feet and side throughout his pontificate, but since January, his references in impromptu speeches and homilies have been so frequent that it seems to be a major focus of his own prayer life.

In his homily at morning Mass on March 20, he shared the advice of a spiritual director: “Look. Look at the wounds. Enter in to the wounds. By those wounds we were healed. Do you feel bitter, feel sad, feel life just isn’t going the right way and you’re also ill? Look there. In silence.” 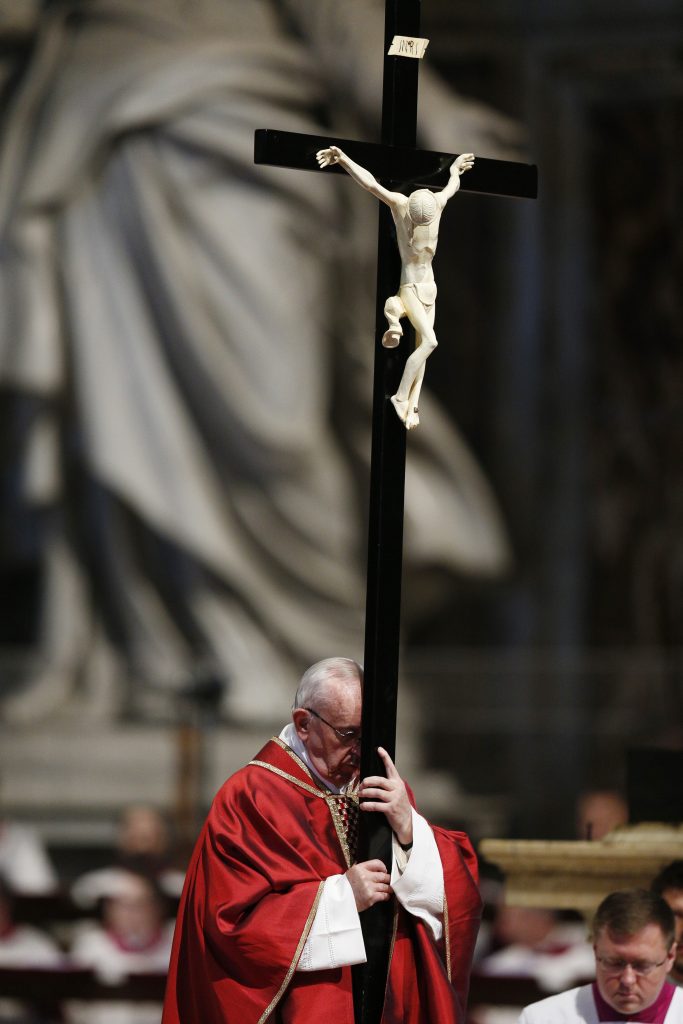 Pope Francis holds a crucifix during the Good Friday service in St. Peter’s Basilica at the Vatican in this April 14, 2017, file photo. The pope has been meditating on the wounds of Christ this Lent. (CNS photo/Paul Haring)

Sometimes, the pope said, artists want to focus more on Jesus’ post-resurrection glory, so they will make a crucifix of gold and adorn it with jewels. But when one is feeling lost or frightened or in pain, he said, look at a crucifix “before the glory” and recognize how Jesus “annihilated Himself” to defeat evil and death.

Reciting the Angelus prayer March 18, Pope Francis recommended a centuries-old devotion in which a person contemplates one of the five wounds of Christ and recites an Our Father before moving to the next wound.

The wounds of Christ were a natural topic of reflection during Pope Francis’ meeting Feb. 10 with members of the Stigmatine order; after all, their spirituality is inspired by devotion to the passion of Christ, vividly shown in the wounds He endured for the salvation of the world.

A devotion to Christ’s wounds “may sound a bit medieval,” the pope told the priests. In fact, meditating on “the five sacred wounds” became popular in the 12th and 13th centuries, but it also enjoyed a resurgence in the 20th century with the growing attention to the Divine Mercy devotions of St. Faustina Kowalska. The Polish nun wrote in her diary that Jesus told her, “When it seems to you that your suffering exceeds your strength, contemplate my wounds.”

Luminaries from St. Clare of Assisi to St. Alphonsus Liguori have guided the faithful in prayers focusing on each wound — left foot, right foot, left hand, right hand and side — and similar devotions are widely available online.

But Pope Francis’ remarks seem to have more in common with the meditations of St. Bernard of Clairvaux and, perhaps naturally, with the popular prayer, “Anima Christi” or “Soul of Christ.” The prayer often is attributed to St. Ignatius of Loyola, founder of the pope’s Jesuit order, and is included in the saint’s Spiritual Exercises.

Mercy, the central theme of Pope Francis’ pontificate, and “the gift of shame,” something he mentions often, intersect in the two treatments of Christ’s wounds.

St. Bernard’s reflection includes the line: “Where have your love, your mercy, your compassion shone out more luminously than in your wounds, sweet, gentle Lord of mercy?”

And the “Anima Christi” includes the plea to Jesus: “Within your wounds hide me.”

At a morning Mass in mid-December, Pope Francis was talking about the tenderness of God and mentioned how when a child gets hurt, his or her dad or mom asks to see the scratch or the bruise, kisses it and says, “all better.” Pope Francis said he imagines God doing the same; God wants to see the wounds of His children, to touch them, bandage them and heal them.

“There, in the encounter of our wounds with the wounds of the Lord, which was the price of our salvation, there is the tenderness of God,” he said. 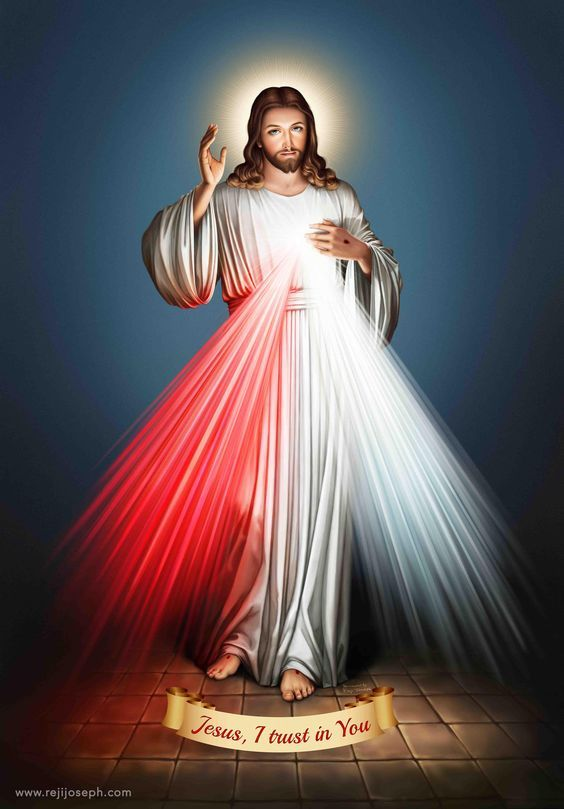 The Divine Mercy novena is a prayer prayed for nine days, beginning on Good Friday. It may be sung or recited.
The Divine Mercy message, and devotion to Jesus as The Divine Mercy, are based on the writings of Polish nun St. Faustina Kowalska. Her published diary includes an experience during meditation before the Blessed Sacrament, “greeting the five wounds of Jesus,” according to the Marian Fathers of the Immaculate Conception of the B.V.M., at www.thedivinemercy.org, when she heard Jesus tell her that her meditation “caused much light to fall upon her soul.” St. Faustina began to hear messages from God about His abundant mercy and His promises to those who would implore His mercy.
“A Prayer in Honour of the Five Wounds of Our Lord Jesus Christ” can be found at www.catholic.org/prayers.
An example of the Divine Mercy Chaplet, as prayer and as a song, can be found at
www.thedivinemercy.org/message/devotions/chaplet.php.
Or download the Today’s Catholic App for the Divine Mercy prayers and others.
Visit www.TodaysCatholic.org

And, he told priests and religious in Chile in January, wounds are not something we should hide from God or from others. In fact, recognizing one’s own wounds, and the woundedness of the Church, is the first step to being able to see and treat the wounds of others.

After the resurrection, “Jesus Christ does not appear to His disciples without His wounds; those very wounds enabled Thomas to profess his faith” after he expressed doubts that the Risen Lord was really Jesus, the pope said in Santiago, Chile.

“We are not asked to ignore or hide our wounds,” he said. “A Church with wounds can understand the wounds of today’s world and make them her own, suffering with them, accompanying them and seeking to heal them. A wounded Church does not make herself the center of things, does not believe that she is perfect, but puts at the center the one who can heal those wounds, whose name is Jesus Christ.”

“In Jesus, our wounds are risen,” Pope Francis continued. “They inspire solidarity; they help us to tear down the walls that enclose us in elitism and they impel us to build bridges and to encounter all those yearning for that merciful love which Christ alone can give.”