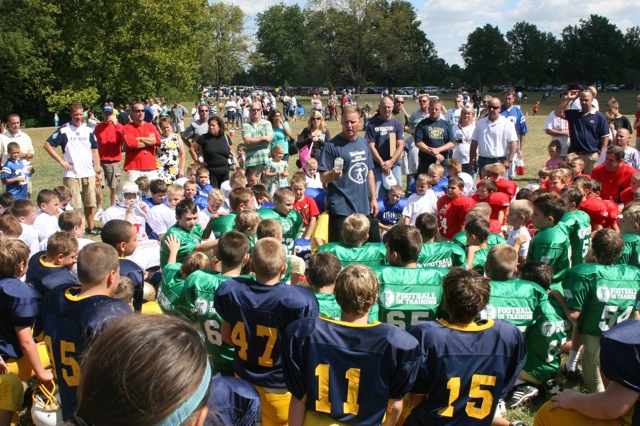 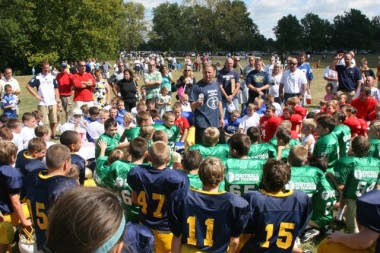 Opening day at the FIT Football in Training program in 2010.

FORT WAYNE — Football In Training (FIT) is gearing up to kick off their second season with registration for the 2011 fall season set to begin mid-April. Inspired by a photo of the Indianapolis Cathedral football state champs at a friend’s home, a group of Bishop Dwenger High School alums brought the idea back to Fort Wayne in 2009 and successfully launched the inaugural season in 2010. The article about the team noted that the core of the winning unit had played together since the third grade.

The goal of the parents birthing the FIT program: To provide their young sons the opportunity to learn and play the game of tackle football. While not, in any way, associated with the Catholic school system, the program is open to third-and fourth-grade boys from those Fort Wayne schools making FIT the perfect stepping stone to Catholic Youth League (CYO) football action. FIT is developmental in nature and teaches players the fundamentals of the game in a safe, fun and competitive environment.

Jen Pesa, fundraising and outreach director is quick to add, “All players from any of the Fort Wayne and surrounding area schools, regardless of school size, are eligible even if your school is not big enough to form its own team. We will place your son on a team near their school.”

The FIT season consists of eight weeks of games typically played at Shoaff Park. Practices are limited to two times per week. The program has partnered with the University of Saint Francis enabling the championship games to be played on the school’s turf.

Pesa, a 1990 graduate of Bishop Dwenger High School, and her husband, Paul (1988), were among those responsible for raising nearly $25,000 to fund the nonprofit program.

Pesa marvels, “We had very generous donors which made this all possible for nearly 100 youngsters.”

Greg Eifert, whose son Griffin participated last year as a third grader, was very impressed with the program coining it “awesome.”

“FIT is a great avenue for young players to learn the fundamentals,” Eifert says. “The coordinators have put together a solid core of great coaches who have played both at the high school and college levels.”

With the addition of two more teams for the upcoming season, FIT has also joined forces with the Fabini Foundation for fundraising collaboration. Their donation matching program will be key to assisting with the extra equipment and uniforms needed. The group’s sponsors listed on the website have been of tremendous financial support to get the program off the ground and will continue to play a vital role as the program continues to grow.