Jesus commanded His disciples to be fishers of men. Christians follow that command in part by gently leading their children in His footsteps.

It’s a path on which Beau Bradtmiller, a Fort Wayne dad of four, has found himself on not only figuratively, but literally.

On a recent morning the sun was shining through tall, shore-bound trees standing sentinel over the sparkling lake waters. Bradtmiller made a graceful cast over the water as the sun burned the summer fog away.

In the still of the dawn, the children he had with him – Braxtin, 8; Creek, 5; and Embri, 3 – were awe-inspired as they took in their surroundings. They knew to be a little quieter when their own lines were in the water. Sienna, 9 months, who was safe in her stroller nearby, cheered when anyone pulled in a fish.

“I see God in my kids, especially when fishing,” said Bradtmiller.

“Nature is a huge part of it. The serenity of being outside and admiring all God’s creations – anything from the fish themselves to the trees blooming in the spring and changing to beautiful colors in the fall. Watching the sunrise and sunset is glorious. 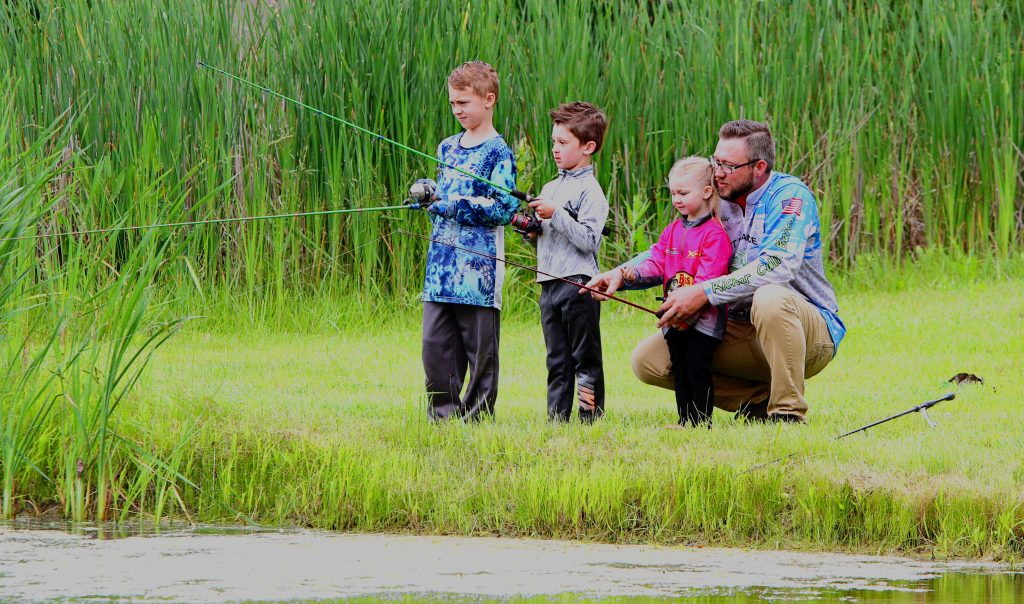 Braxtin, Creek, Embri and Beau Bradtmiller enjoy an afternoon at the neighborhood pond where they fish much of the time. Their father, Beau Bradtmiller of Fort Wayne enjoys fishing, and uses the activity’s many peaceful moments to encourage his children in their Catholic faith. — Barb Sieminski

He enjoys getting away from electronics, phones, computers, TVs and escaping the fast-paced world and simply connecting with nature.

“Fishing alone gives me the quiet I seek and plenty of time to think and reflect on life and myself and talk to God. I’ve even taken the opportunity to evangelize while fishing. I would like my children to appreciate and take care of, and not take for granted, any of the simple things that we may encounter while outdoors — and then relay that into their everyday lives.”

Bradtmiller is the finance manager at Parkview LaGrange Hospital in LaGrange and a member of St. Vincent de Paul Parish in Fort Wayne. He grew up in a fishing family, not only pulling in bass, catfish, carp, bluegills and pike at various inland lakes, but also enjoying saltwater fishing in Florida.

“It is pretty neat that I get to share with my kids some of the same places where I learned and grew my love for fishing,” said Bradtmiller. “My Florida cousin purchased a new Starcraft boat and this month we’re planning on taking his oldest son and my three oldest fishing in Tampa Bay – the kids can’t wait!” 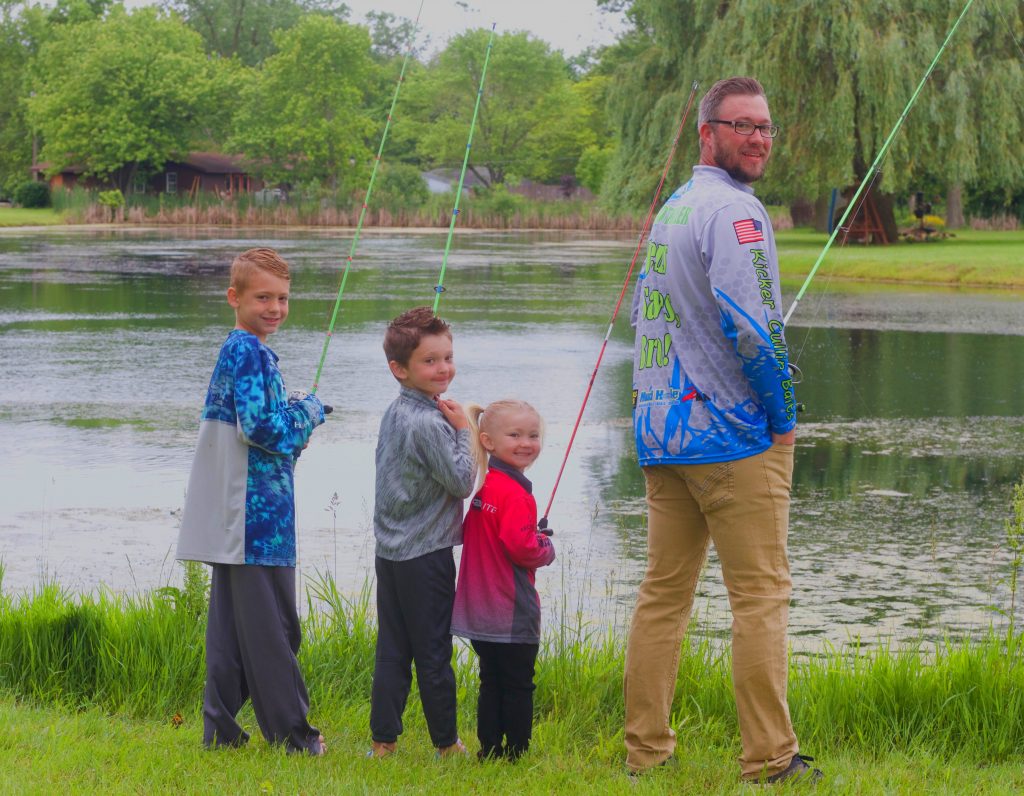 Beau Bradtmiller of Fort Wayne enjoys fishing and uses the activity’s many peaceful moments to encourage his children in their Catholic faith.

The kids are at the stage when they will query Bradtmiller about anything.

“They ask about the birds, fish, trees and the oxygen in the water or the other wildlife we may see when fishing. The answers come down to because that is how amazing God is, and that is how He created each and every living thing,” said Bradtmiller.

Growing up, Bradtmiller attended Sacred Heart Parish in Fort Wayne, where he served as an altar boy. Later he attended St. Joseph – Hessen Cassel Catholic Church and finally settled in at St. Vincent de Paul, where the family has been for four years.

“Last April my wife, Miranda, and I celebrated our seventh wedding anniversary, which was a very special one, as our oldest child Braxtin celebrated his first holy Communion at St. Vincent,” said Bradtmiller. “Also, within the last year and a half, I attended a Christ Renews His Parish men’s retreat, which helped me grow even deeper in my faith. Then, afterwards, we joined Team 63, taking the journey through formation. Five months later we put on the next retreat weekend for the new invitees.

“What an experience! For anybody who has never been on one, they must attend a weekend,” he said. “It was life-changing. Not only did this experience help me to grow closer to God, but in return it helped me to turn around and share the love with my family, resulting in growing closer to them as well. The CRHP retreat happens twice a year, and, I highly recommend it.”

Bradtmiller has a special devotion to Pope St. John Paul II, once referred to as the pope of the family.

“I actually got to hold a first-class relic of his about two years ago. It was a vial of his blood that both my wife and my kids got to lay our hands on it and say a prayer together. It was a very amazing feeling. Since then, there have been little things here and there that have led me closer to him.” 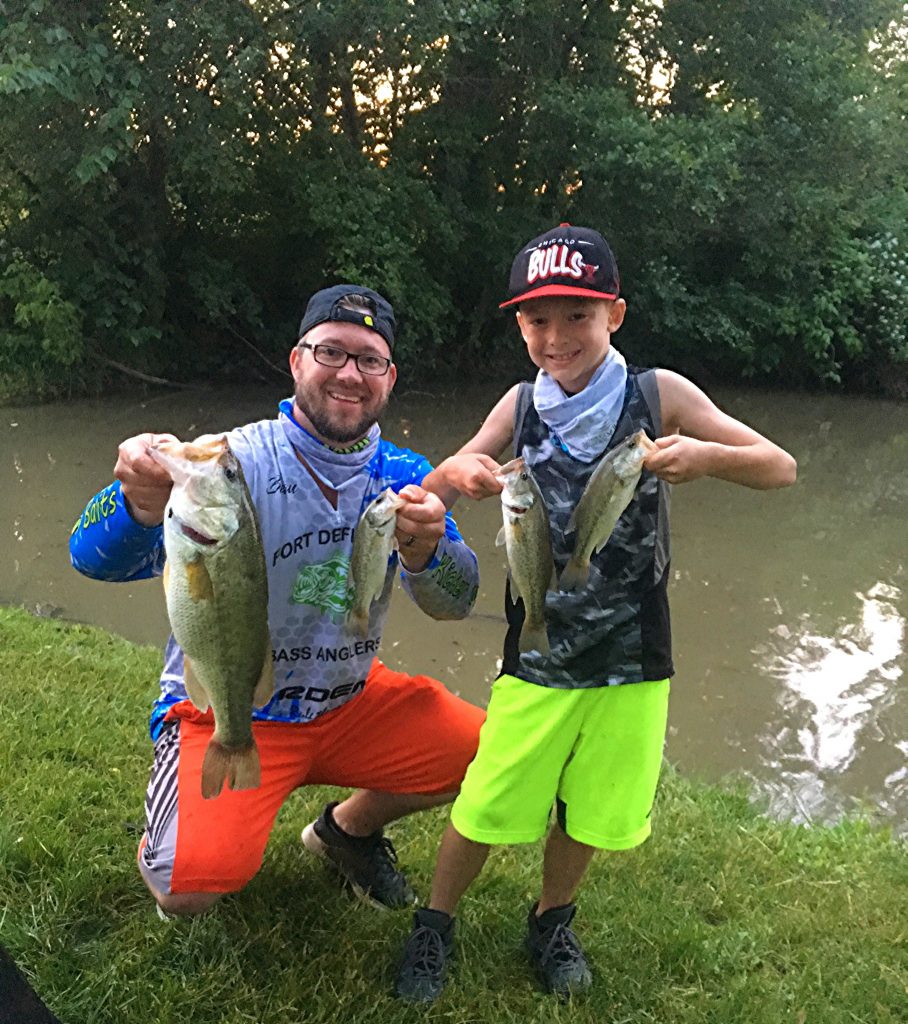 Bradtmiller has been a longtime member of the Fort Defiance Bass Anglers. When he received a club jersey, the front of it had the club name; across the back, he ordered the dynamic words, “Jesus Saves, Bro.”

“I figured, instead of advertising for a bunch of fishing brands, why not advertise for our Lord and Savior, Jesus Christ?

“The joy I see on my kids’ faces and the smiles that go from ear to ear when they get a bite and reel in a fish is priceless,” he said. “It makes me take time to think just how truly blessed I am to have such four wonderful kids. When I hear Embri yell, ‘Dad! I have a nibble!’ or one of the boys scream with excitement, “I’ve got one!” it just puts a huge smile on my face.

He sees God through them, he said.

“I also feel that God has used my children to better teach me patience, anything from a tangled rod to three tangled rods all together. I must say I have gotten very good at untangling fishing line!