“I felt excited, like a little kid myself, to be able to receive Jesus today. In a way, it was a ‘first Communion’ for most of us, after missing the sacrament for two months. I guess it’s true that absence makes the heart grow fonder, though I hope we won’t have to do without for such a long time ever again!” said Liesbeth Cremers. Cremers’ son, Benjamin, received his first holy Communion at St. Joseph Parish, South Bend, May 17.

The weekend of May 16-17 Bishop Kevin C. Rhoades permitted first communicants in the Diocese of Fort Wayne-South Bend to receive the sacrament.  Guidelines were given from the Office of Liturgy and Worship about to how to safely and respectfully proceed during Stage 2 of returning to Hoosiers’ normal lives. 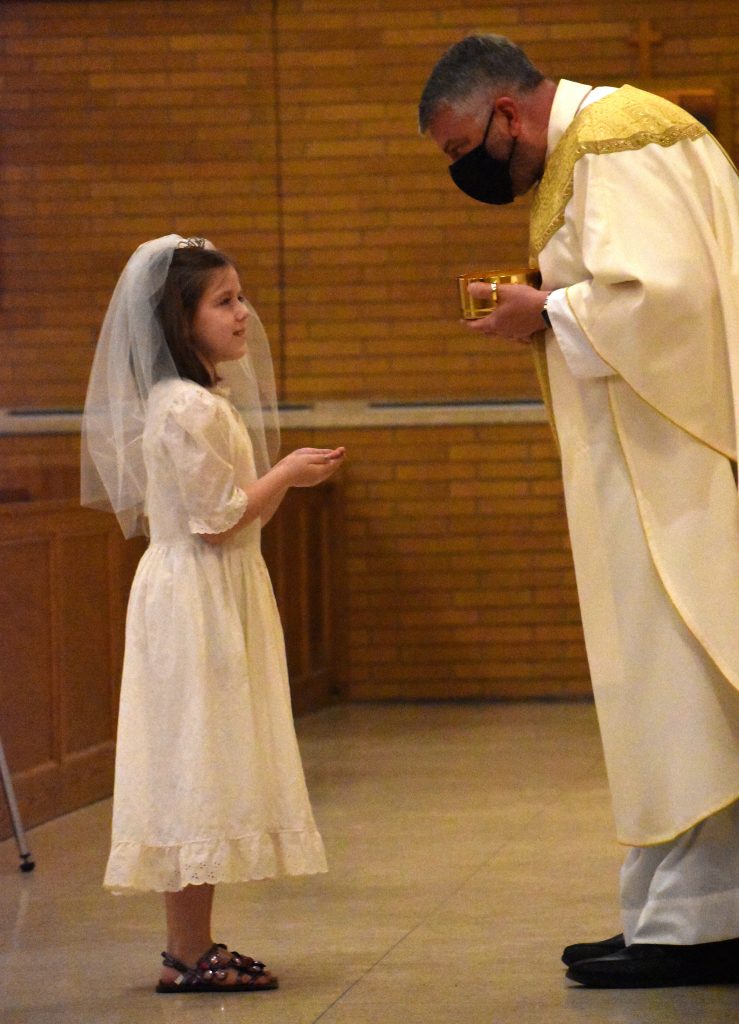 Cremers, the mother of six, said of her son’s first Communion Mass: “It was wonderful! Oftentimes we don’t appreciate what we have until we have to do without. I just always took for granted that we could go to Mass and receive the Eucharist. It’s not that I thought receiving Communion wasn’t special, but it was just a given that you could. … I felt really blessed to have a first communicant in our family and grateful that the bishop immediately had those second graders in mind when churches were allowed to open again, albeit with restrictions and precautions.”

Cremers and other second grade parents from St. Joseph Grade School, South Bend, were offered three options for their children’s new first Communion date: May 17, a Sunday in early June or another weekday Mass, where the first communicant could join with their family and receive the Eucharist for the first time.

“I picked the first available option because we were all so eager to attend Mass again,” Cremers joyfully responded. “It was very short notice; I had thought that first Communion Masses would probably be postponed until school reopened in the fall, so this was a great surprise and it was very exciting.”

She and her husband, Martjin, continued to prepare their son and teach him at home, since school had shifted to remote and electronic-learning since March 16.  “We talked about it all week, since it was hard to believe and so exciting that it was actually happening, and we prayed for Benjamin at bedtime. Of course, preparation has been a lifelong process, both in the family and at school. So even though Benjamin missed the first Communion retreat, I think he was ready.” 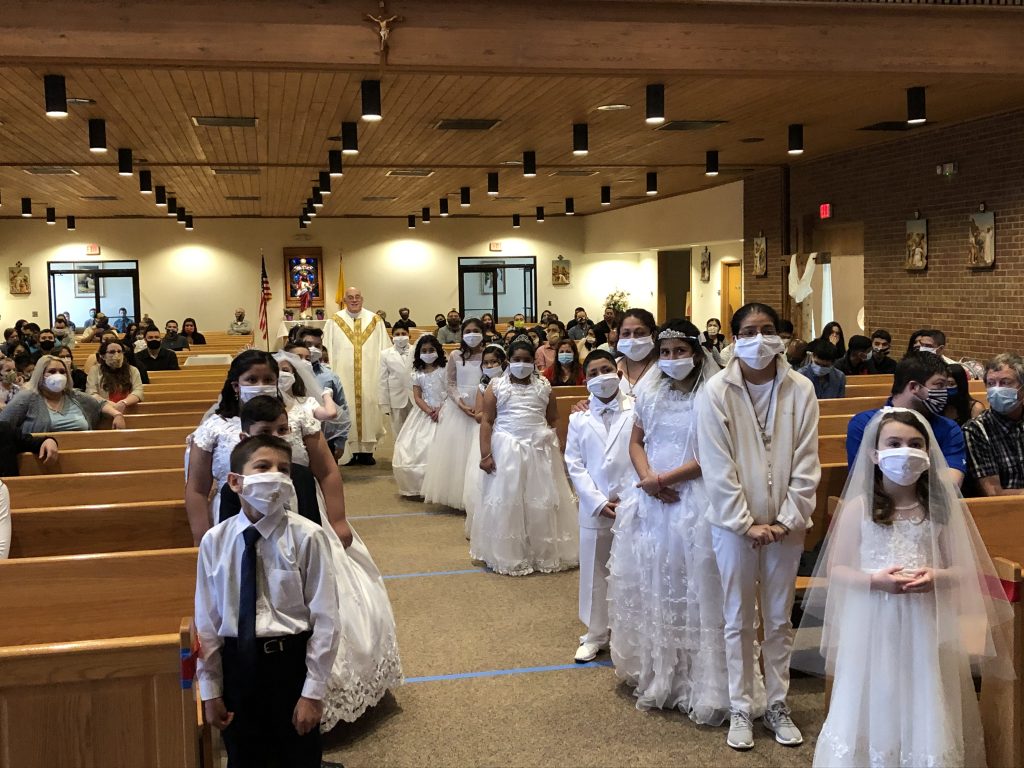 Denise Fedorow
St. Mary of the Annunciation Parish, Bristol, celebrated first holy Communions May 16. After Mass, the new communicants gathered along with their pastor, Father Robert Van Kempen, for a socially distanced group photo. Family groups like the Sandoval family, second to the right —Asheley, Maria, Maria and Hector Jr. — were able to be closer. Their mother, Maria, said being able to receive the Eucharist that day, “Meant everything to us. We know it will help in our lives and bring us all closer.”

John and Demetra Schoenig, the parents of Cormac, also a St. Joseph second grade student, found him also ready to receive the sacrament. They were especially grateful to Father Kevin Rousseau, CSC, for his leadership during this unusual time. They were excited about returning to their parish. “St. Joe is a community that makes it easy to live in gratitude. Over the course of the past few weeks, we’ve found ourselves falling into the trap of allowing our isolation to give us permission to focus inward and take inventory of our inconveniences. As we looked around during the Mass today, we were so grateful to be back together with so many people who have been so important to our family,” Schoenig shared.

“Cormac’s grandmother attended Mass with us today. At the end of the liturgy, she remarked that this was the longest she had gone without receiving Communion, since she and her family were living in Turkey many years ago. She said that this recent experience was much more challenging than that time abroad, because this time she didn’t know when she would be able attend Mass again. We just love that her first time back to the sacrament was Cormac’s first time ever.” 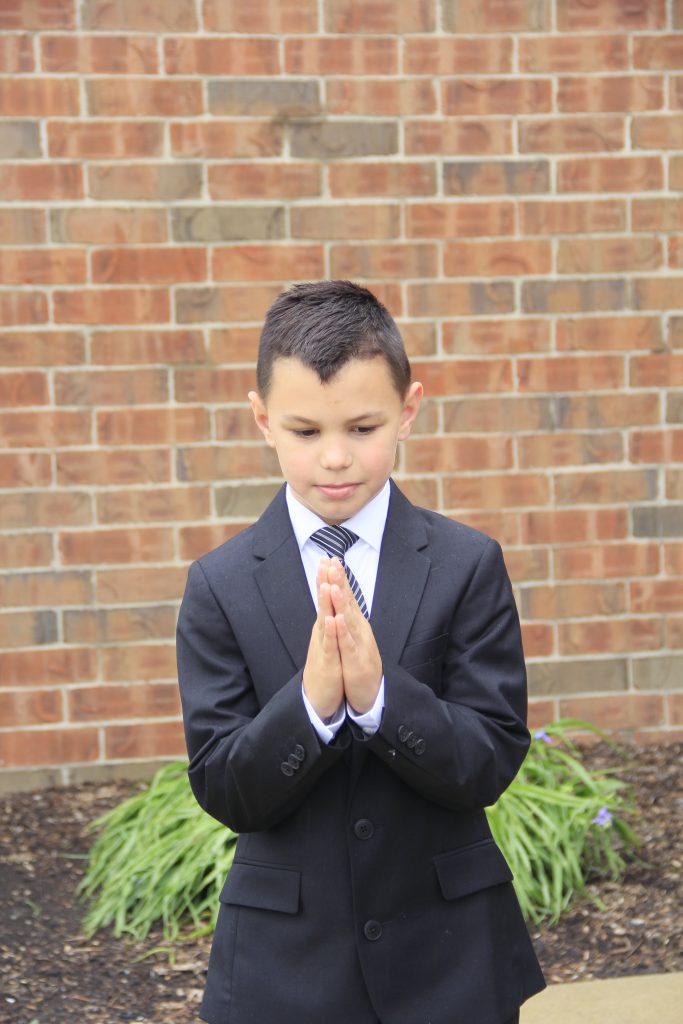 Jennifer Barton
St. Vincent Parish in Fort Wayne is one of several across the diocese that acted on the permission given by Bishop Kevin C. Rhoades to celebrate first Communion Masses the weekend of May 16-17. 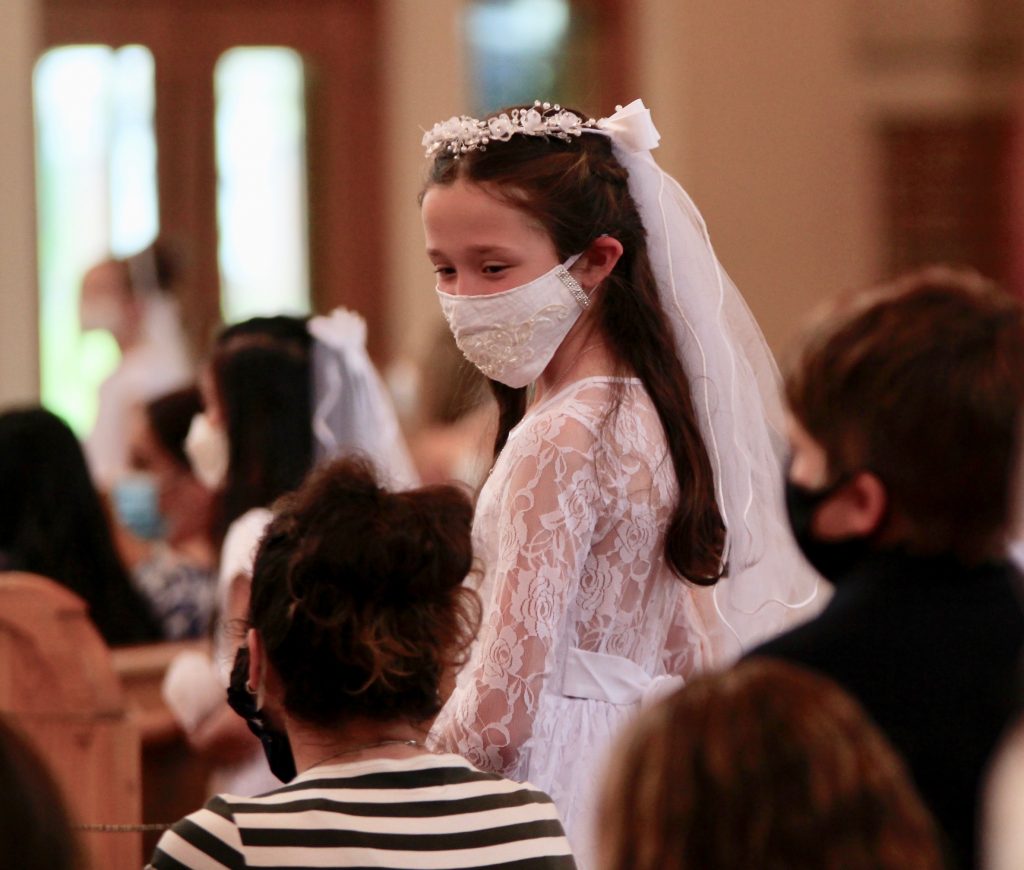 Jennifer Barton
The traditional first Communion dress is a beautiful keepsake from the special occasion that many young girls treasure for years. This young lady from St. Vincent accessorized her face mask with embroidery to coordinate it with her dress. 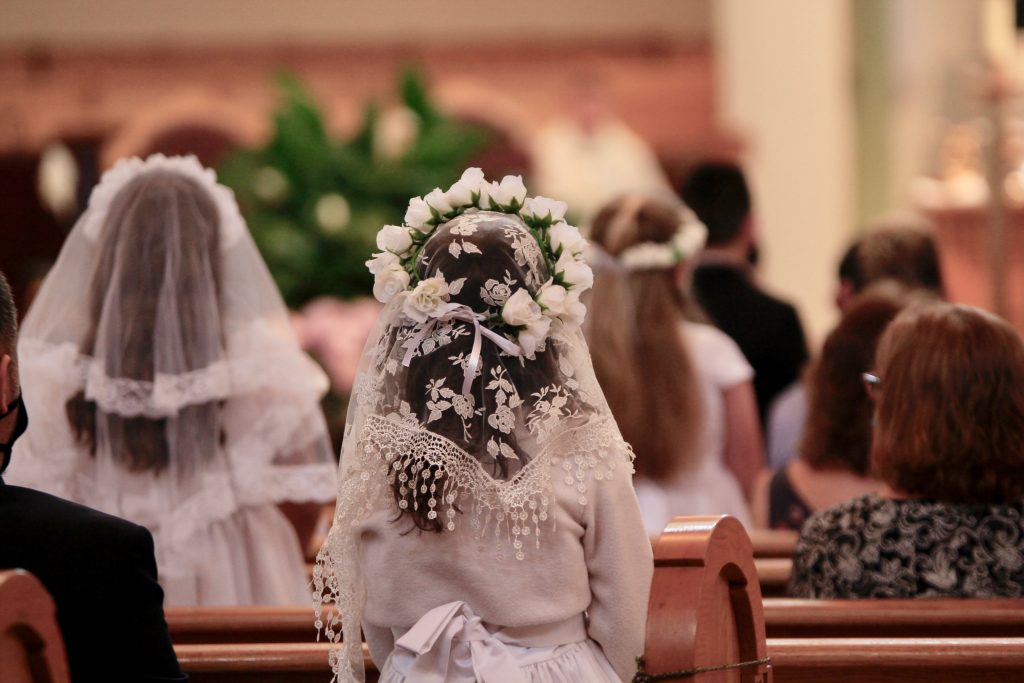 Dan and Jenica Cory, the parents of son Henry, also found themselves grateful and full of emotions. After receiving the Eucharist, Jenica reflected, “I had a hard time falling asleep last night. I felt emotional and nervous and was holding back tears throughout the Mass for both Henry’s excitement and my gratefulness for receiving Jesus again after so many weeks. My heart felt more fond of Christ after the absence.”

In the Cory’s domestic church, “our family streamed Mass each Sunday morning and have been praying a near-daily family rosary,” Jenica said. “We have also been going to adoration at St. Joe almost each week, trying to stay as close to Jesus as we could with the limitations. So when I asked Henry if he would like to receive his first Communion next Sunday, he was really excited and said, ‘Yes! Definitely! Right away!’ I was so pleased that he was so enthusiastic about it so we went for it, even though it felt a bit last-minute. I wanted to make the day special for him like I was able to do for my older daughters, when I had time to plan.”

“I was scared at first, but while I was taking Communion I realized that there was nothing to be scared of besides being the very first communicant,” Henry shared.

“I felt good because we could finally be back!” He added that he was excited to “finally receive Jesus, instead of just watching everyone else.”