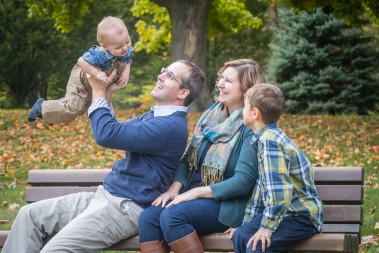 “They gave me the worse news I could imagine: my child was not alive.”

These are the words of Ashley Kreager, a South Bend resident, as she sat with her husband, Ryan, and 2-year-old son, Michael, in the physician’s office. It was Tuesday of Holy Week, 2011.

“That day was really tough.” Ashley said, “We walked in to hear our baby’s heartbeat, and, instead, our baby was gone. We left that room and looked around at all the other women in the office. They were still pregnant. I wasn’t.”

So began a four-year journey of miscarriage and infertility for the Kreager family. Childhood friends who were raised in Warsaw, Ashley and Ryan were married in 2006, a month after graduating from Franciscan University of Steubenville. They welcomed their first child, Michael Ryan, in December of 2008.

A year and a half after Michael’s birth, Ashley began experiencing problems with her hormones and reproductive cycles. “Because we were charting with Natural Family Planning, we were able to notice something was wrong with my body. I decided to learn the Creighton method, because of how scientific it is with how it tracks data.” 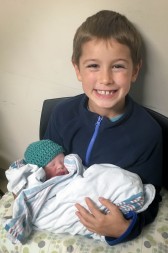 The Creighton Model FertilityCare System is a method of natural family planning that tracks a women’s natural biomarkers, telegraphing any abnormalities in her health and identifying when a couple is best able to conceive or avoid a pregnancy. CrMS works in conjunction with NaPro Technology, which is based on 30 years of scientific research and seeks to cooperate with a women’s procreative system to identify underlying problems and work to correct fertility issues.

Fast-forward to January of 2011: Ashley and Ryan learned they were expecting their second child. It was just as Ashley had envisioned as a young wife, “having baby every couple years.”

Four months later, they learned they lost their daughter through miscarriage.

“We had already told everyone that we were expecting a baby,” Ashley said. “We wanted to share early and have people pray for us and share our joy. Then we had to tell everyone that our baby had miscarried.”

That Good Friday service, Ashley walked down the long aisle at St. Pius X to venerate the cross, and, “I couldn’t keep it together anymore. I was just sobbing. I was standing there before our Lord on the cross, realizing that I was suffering with Jesus on the cross in a very profound way. I am carrying my 2-year-old in my arms and my dead child inside me.”

Easter Monday, Ashley went in for surgery to remove the remains of her lost child. She returned home and her body healed, but her heart was hurting. Catherine Therese was buried in Southlawn Cemetery through a program called In God’s Arms, which buries the remains of miscarried children. 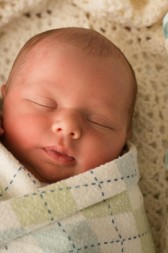 Alexander Bradley was born in October 2015.

That October, the Kreager family had a Mass of Remembrance for their daughter. They invited close family and friends, chose the readings, picked songs and received a program with Catherine’s name on it.

“This Mass was especially helpful, because there was other child loss in our family that no one had talked about or grieved over. Miscarriage is such a private grief, but this Mass was a time when we could all prayerfully grieve as a community,” Ashley said.

They doctors did not know why Catherine died. For Ryan, “It was a moment where we had to step back and realize that we may not find the answers in this life, but we had to trust that even in the middle of our pain God had not abandoned us and had a plan for our family.”

Ashley added, “God created the life of my child, and the life didn’t stay sustained. It’s part of a plan, but I don’t think God decided ‘I am choosing to kill your baby.’”

“That was the start of a rough two years,” she continued. “I would conceive and then have a miscarriage every six months or so.” The Kreager family also lost Rachel Gianna in November of 2011, Gabriel Pio in March of 2012 and Maria Teresa in October of 2012.

The Kreager’s fourth miscarriage occurred because of an ectopic pregnancy. After receiving the devastating news, they prepared for a surgery to remove the fallopian tube, in accordance with ethical and religious directives to respect the life of their unborn child. The night before surgery, however, they learned that Maria Teresa had naturally passed away. This allowed the Kreagers to change the surgical approach and for the physician to remove the remains of the baby while keeping the fallopian tube intact. During surgery, the doctor was also able to identify some underlying issues, including endometriosis and adhesions, which may have contributed to the miscarriages.

“Right after the ectopic pregnancy I got a sense that I needed to talk about my children more publically,” she said. “People would ask ‘how many kids do you have?’ and I didn’t know what to say. Do I have one or do I have five?”

Ashley continued, “I want all our kids to be a very tangible part of our family. I didn’t want to keep denying the existence of my four children in heaven.”

That year, the Kreager family chose to share about all five of their children in their Christmas card, writing a letter about their four miscarried children and the journey they were on.

The letter sparked a lot of responses. Ashley shared, “I was shocked how many women had been through the same experience, but this isn’t something that you talk about, at least out loud.”

She continued, “Many people already knew about the first miscarriage, but they didn’t know I had four. It was scary to be vulnerable, and yet very good. I think because of that letter, more people started to pray for us.”

Following their fourth miscarriage, the Kreager family journeyed into a new phase, one of secondary infertility.

“I think that was the hardest part of our journey.” Ashley said, “We felt very alone. We had a 4-year-old child to love and care for, yet we were grieving the fact that we could not expand our family anymore. Michael yearned for a sibling too. He couldn’t understand why our family didn’t grow while everyone else’s did.”

“I had to come to terms with letting myself acknowledge that I am sad, and saying it out loud. It’s not a bad thing. It’s nothing to be ashamed of. This is where I am on my journey.”

One source of healing was the Blessed Sacrament. “I would go to adoration every week. In adoration and in my journal, I would just say ‘I am sad. I am upset.’ I don’t think I could have done that without that weekly adoration time to just speak to God about whatever I was feeling right then.

A year after they lost Maria Teresa, the couple went to see Dr. David Parker, a Catholic NaPro Technology-trained obstetrician and gynecologist at St. Joseph Health System. “He confirmed that my reproductive system was in bad shape. I went in for surgery a month later.”

A little over a year after the surgery, they discovered they were pregnant again.

“When we finally conceived Alexander, we learned so many people had been praying for us,” Ashley shared. “Alexander is the fruit of much, much prayer. We decided to tell Michael right away. Every night of that pregnancy, Michael prayed the baby would make it.”

Alexander Bradley was born in October of 2015, and is now a walking, blabbering, happy 1-year old who brings joy to the Kreager family and all who meet him.

“The theme of joy has really been true this past year.” Ashley said, “It was such a joyful experience just to hold another child in our arms after waiting so long. We just try to be very thankful that we have two living children. We have brothers who can love each other. And we look forward to how God will continue to write our family story.””