Name of school in cutline below corrected on Dec. 5, as well as gender of student in 12th paragraph. 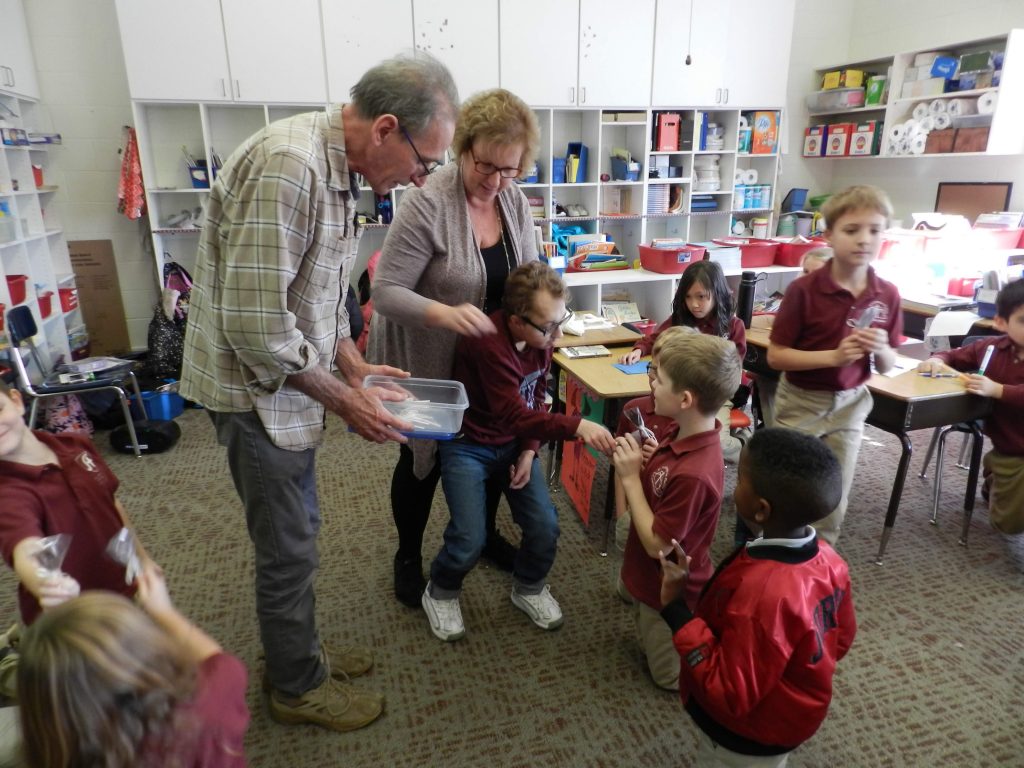 Photos provided by Lesley Kirzeder
Students of St. Anthony de Padua School, South Bend, accept chocolate suckers from Ryan Bear, a young man with a chromosomal abnormality. Bear visits the school regularly with his mother and an assistant from the Logan Center so he and the students can interact and learn to work with one another.

Susan Bear sees her son Ryan as an ambassador. Although the chromosomal abnormality Wolf-Hirschhorn syndrome has limited his learning, speech and mobility, Ryan loves to be around people and to do things in the wider community.

Students respond enthusiastically to his affection during Ryan’s twice-monthly visits to St. Anthony de Padua School, South Bend. They were thrilled when, in October, he accompanied them trick-or-treating at the University of Notre Dame. And one student recently saw him at a park and came right over to say hello.

“I remind them that Ryan is perfect in God’s eyes,” explained Susan. “He can do almost anything you’re doing. We just need to figure out how to adapt the activity so he can participate.”

During a recent visit, students were doing an art project. They found a hard surface for Ryan and taped the paper to it, found him a giant marker and helped steady his arm as he drew.

Ryan was born in Indianapolis, where an alert physician was able swiftly to diagnose Wolf-Hirschhorn syndrome. He has had multiple medical and developmental challenges, including a 2006 kidney transplant, but his parents have been determined to make his life as normal as possible.

The Bears didn’t want their firstborn to be an only child, so he has a younger brother and sister, Tyler and Lauren. The children attended Good Shepherd, a Catholic school in Evansville, where the family lived until six years ago.

Susan made sure Tyler and Lauren and all their peers were comfortable around Ryan. She spent a great deal of time in the school, presenting her own program of disability awareness to every grade level. Ryan was always her helper.

After the family moved to Mishawaka, Ryan completed the young adult program at Penn High School then enrolled in the adult day program at Logan Center. The family joined St. Joseph Parish, South Bend, but Susan wasn’t sure how to resume the disability awareness work that had made such an impact in Evansville. 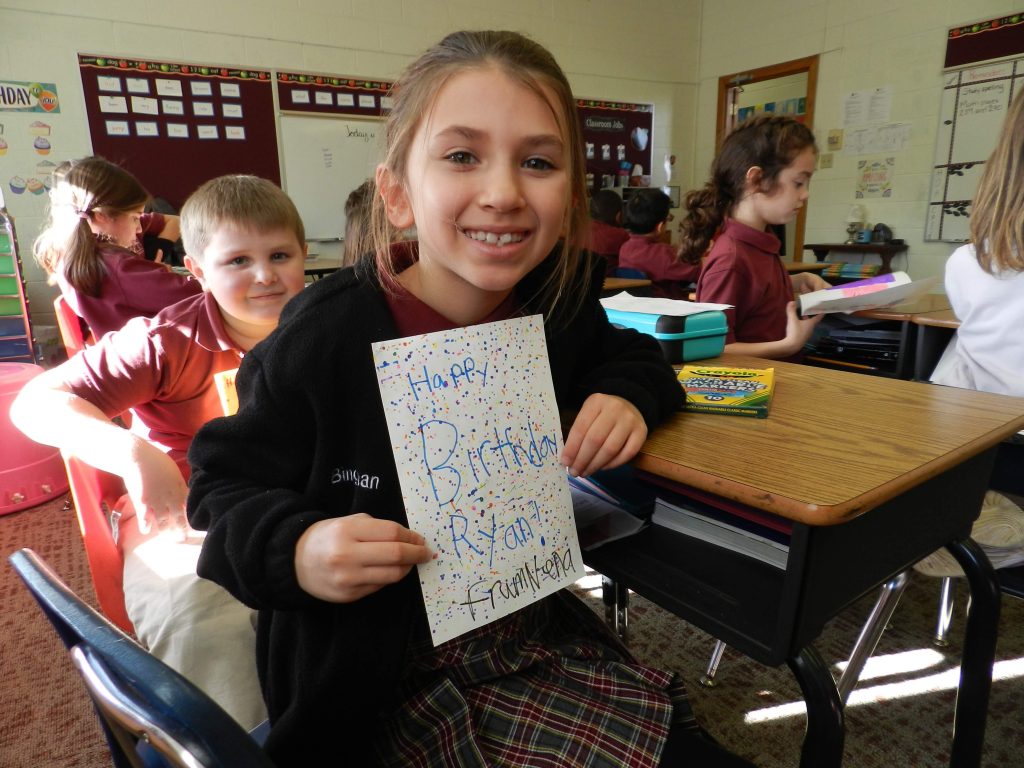 The students made cards for Ryan and sang to him on his birthday.

Ryan enjoyed outings with other Logan clients to restaurants, entertainment and athletic events, but his mother wanted a way for him to be of service to others. During a case conference at Logan Center, Susan looked out the window and her eyes lit on St. Anthony de Padua School across the street.

She approached principal Karen Bogol to see whether Ryan could interact with students on a regular basis.

“As a Catholic school, we want to include everyone,” stated Bogol, “yet our resources are limited.”

When a parish family approached her wanting to pull their daughter with Down syndrome out of public school for junior high, St. Anthony was able to work things out, admitting her in fall 2018.

“We have been so blessed!” exclaimed Bogol. So when the Bears brought their proposal, Bogol was eager to try that as well.

“Having him come regularly is so much more profound than a one-time outing,” she explained. “It’s a safe opportunity for our students to enter into a relationship with someone who initially seems so different. It opens their minds and hearts and awareness so they won’t hold back when they meet differently-abled folks elsewhere.” 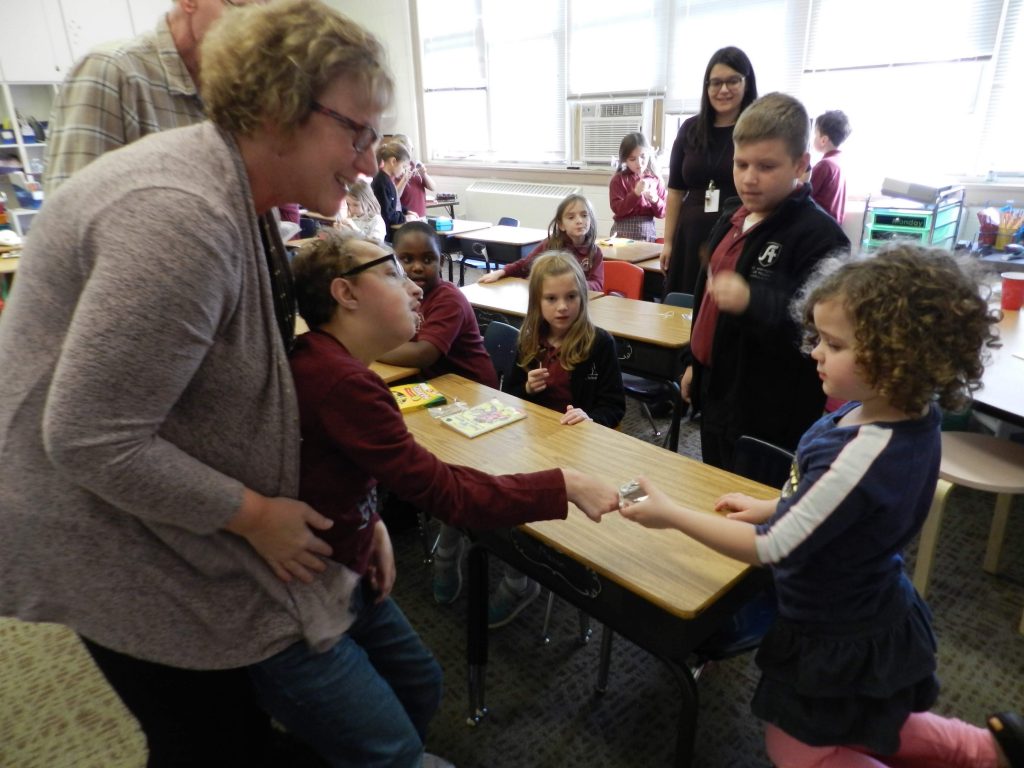 Bogol admitted, “It has opened my eyes to how important genuine community partnerships are. Of course, as a Catholic school we try to make a difference in the world, but it’s easy to be absorbed in the details of life inside these walls. Having Ryan here makes us more aware of the transcendent dimension of what we do here. Our going out and others coming in on a regular basis are essential.”

The arrangements were made patiently and deliberately. All parents received a letter introducing Ryan. In it, his mother wrote: “Throughout his life, Ryan has been instrumental in helping others better understand the capabilities of those labeled with disabilities. He has heightened the sense of empathy of those who interact with him, and Ryan has become a friend to many.”

She also set up a disability awareness session with stations that allowed the young students to try out dealing with vision or hearing loss or using a wheelchair. Then, last spring, Ryan visited the second grade classrooms several times as a trial and they learned that second grade teacher Joseph Bagiackas had been Ryan’s counselor the previous summer at Camp Millhouse. That was the last confirmation they needed.

Students quickly got to know Ryan. They were surprised to learn that he can walk with assistance. After they found out he wears a necklace to give him something to do with his hands, some of them made him jewelry.

Although he is fed through a G-tube, he can taste soft foods for comfort, so when one student brought in a birthday treat for the class, she included pudding for Ryan.

When Ryan visits a second or third grade classroom, he enters into whatever activity the teacher has planned for the day. He is part of a “house,” or “family” consisting of students from every grade level who participate together in special outings and events.

This year each house is interacting with an organization in the community, including Logan Center.

On a day Ryan was to visit her classroom, second grade teacher Abigail Stopczynski was hesitant to write “Happy Birthday, Ryan” on the classroom screen because she knew her students would hardly be able to contain their enthusiasm once they realized Ryan was on his way. When he arrived students from both second grade classrooms gathered near him, his maroon shirt blending with their uniforms.

He came in his wheelchair, accompanied by someone from Logan; but on this particular day, Susan also was helping. She shared with them that Ryan had gone to Hacienda on his 26th birthday two days earlier and a Notre Dame basketball game.

Each student had made Ryan a birthday card. They were eager to sing him their jazzy version of the birthday song, complete with “cha cha chas.” As they do at every visit by Ryan, they played “Ryan Says,” imitating him as he raised his arms in the air, grabbed his ankle or crossed his arms over his chest, which is sign language for “I love you.”

After the game, they tried “Sound Bingo”: listening to tape-recorded sounds and marking pictures of what they heard on special bingo cards, and they talked about the accommodations that might enable a person with hearing or visual challenges to play bingo.

Before leaving for the day, Ryan handed each child a homemade chocolate sucker in the hand shape that means “I Love You.” And there was plenty of love to go around.