Humility, Mother Teresa said, is “the mother of all virtues.” While the Knights of Columbus councils in the Diocese of Fort Wayne-South Bend have much to boast of in their efforts to financially support diocesan seminarians, Bishop Kevin C. Rhoades spoke of the humility that lies at the heart of their charity at the yearly meeting of the Knights of Columbus Leadership Team Sept. 2 at St. Peter Parish in Fort Wayne.

Bishop Rhoades meets with the Knights yearly, said Mark Michuda, state faith director in Indiana and member of the St. Aloysius council. Roughly 20 councils were represented Sept. 2, many from communities outside Fort Wayne, such as Avilla, Arcola and Decatur.

The evening began with vespers in the Gothic church, which included a reading from 1 Peter 5 advising the faithful to “clothe yourselves with humility.” The meeting then transitioned to a casual setting at the parish hall. 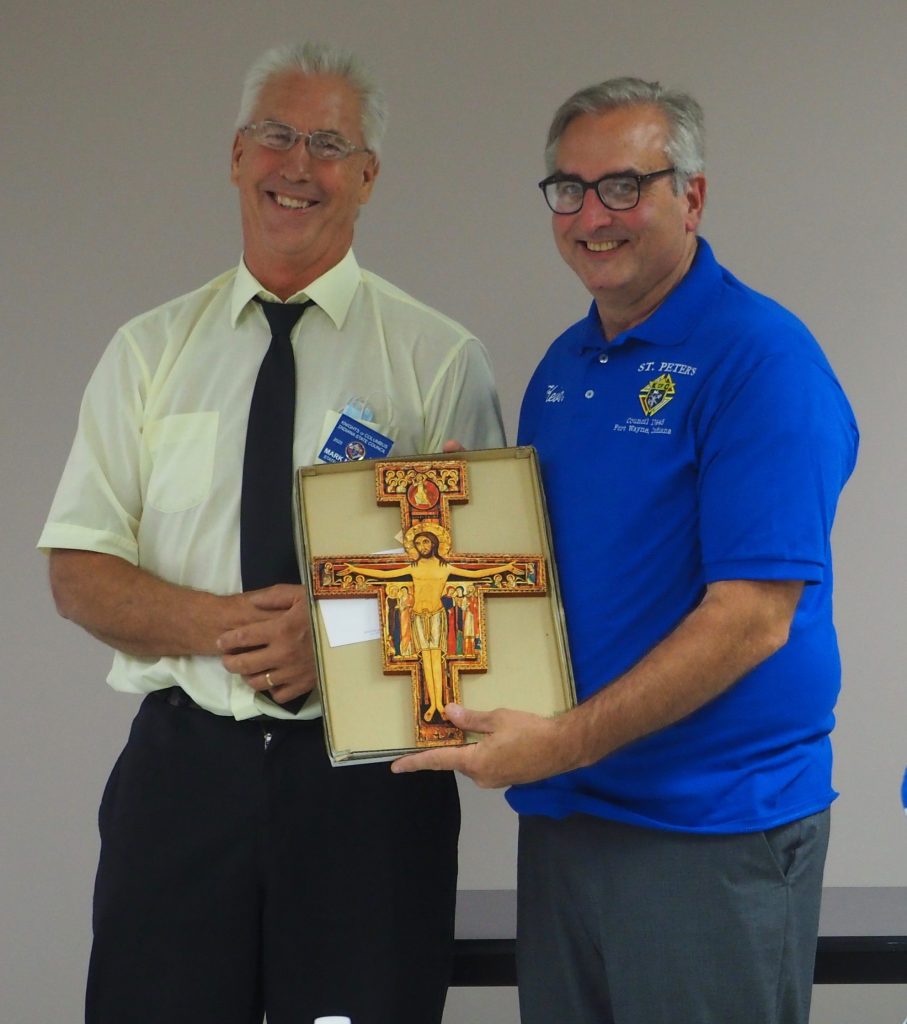 Photos by Jennifer Barton
Above: At the yearly Leadership Team meeting on Sept. 2, Mark Michuda, state faith director for the Knights of Columbus, presents a San Damiano cross to Kevin Workman, grand knight of the newly formed council at St. Peter Parish in Fort Wayne.

Local Knights of Columbus councils have been instrumental in helping defray the rising costs of seminarians’ education. With an increasing number of young men discerning priesthood, the Diocese of Fort Wayne-South Bend could see as many as 20 new priests ordained within the next few years. Bishop Rhoades stated that though their education is a large expense, he doesn’t want it to discourage men from responding to a call to the priesthood.

He also applauded the Knights’ supporting the former Franciscan friars in Fort Wayne with their educational needs. Since 2011, the Knights have raised over $180,000 for this purpose. Though the community recently decided to disband, Bishop Rhoades assured the Knights that their efforts were admirable and certainly not fruitless. Three of the former brothers are now in formation to become priests of the diocese. 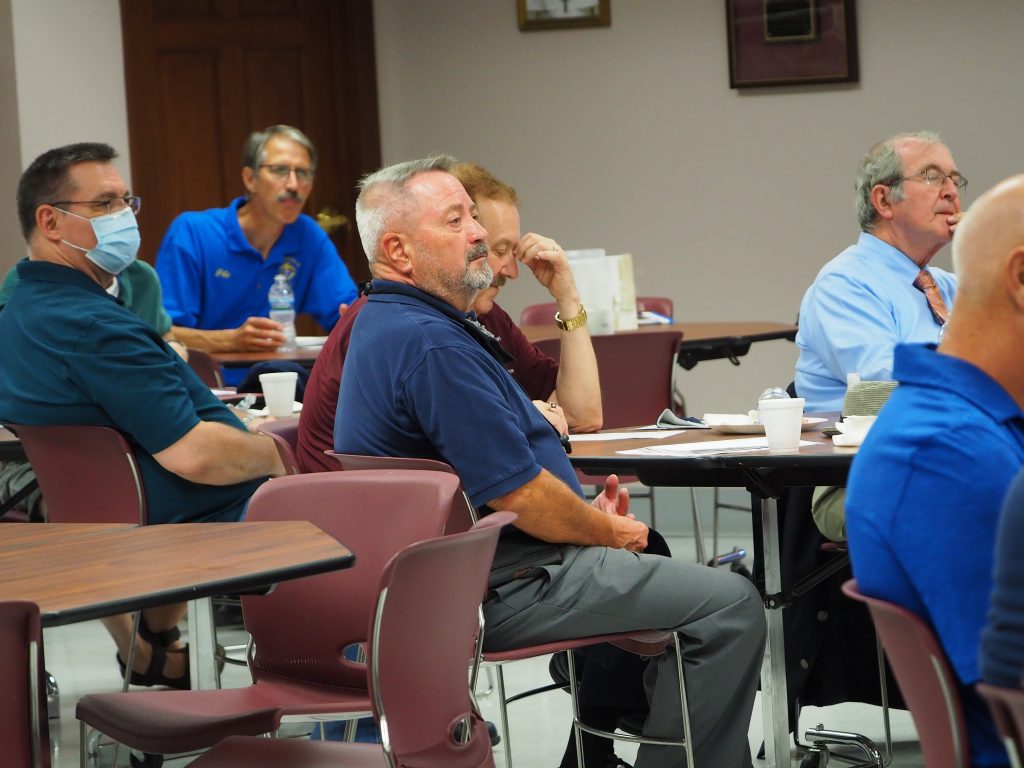 Humility allows a Christian to gain a greater love for God and others, which is what the Knights strive to do, and the good work they accomplish in the diocese has been recognized by the national organization. Bishop Rhoades noted that 16 councils in Indiana were recently awarded the organization’s Star Council Award for charitable donations, insurance and growth in membership. Of those 16 councils, he was proud to announce that 11 were in this diocese.

At the end of the evening, several councils presented Bishop Rhoades with checks to assist in the educational needs of future priests. One of these award-winning councils was Corpus Christi 7839 from Kendallville, represented by Grand Knight Jeff Nosek, the youngest member to hold that title for his council.

“I love doing it,” he said. For Nosek, “it’s just jaw-dropping and humbling” to witness a small council like Corpus Christi raise money to further the mission of the Church.

Hosting the meeting at St. Peter Parish was an interesting choice by the Knights, as the parish, over its 120-year history, never had its own Knights of Columbus council until this year. During the meeting, Michuda presented the newly formed council’s grand knight, Kevin Workman, with a San Damiano cross blessed by Bishop Rhoades. Other councils received the cross last year.

St. Peter council member Fred Sturm stated that former pastor Father Tyrell Alles, OSB, was enthusiastic about the creation of the new council and fully supported the Knights. Father Alles himself earned the rank of fourth-degree Knight before returning to his home in Sri Lanka earlier this year.

“As a young pastor, it brings me great joy and great eagerness to see a group of men that are dedicated to serving the Church. They are going to be a powerful group for me to tap into to help St. Peter’s continue the work of Christ in our city.” 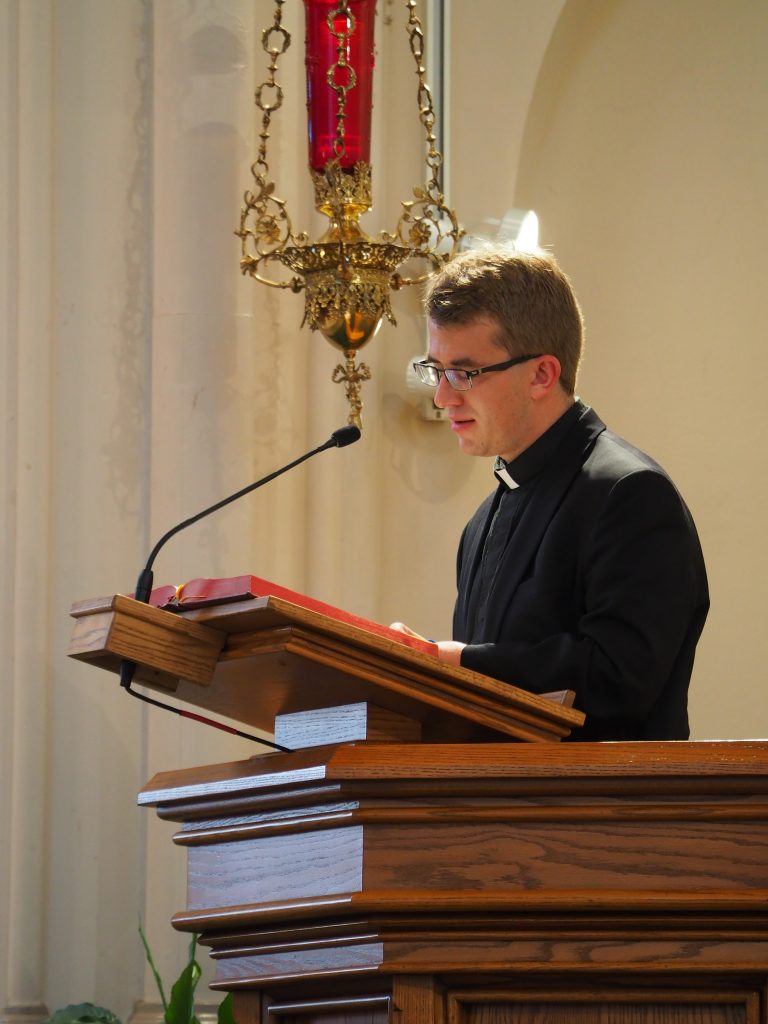 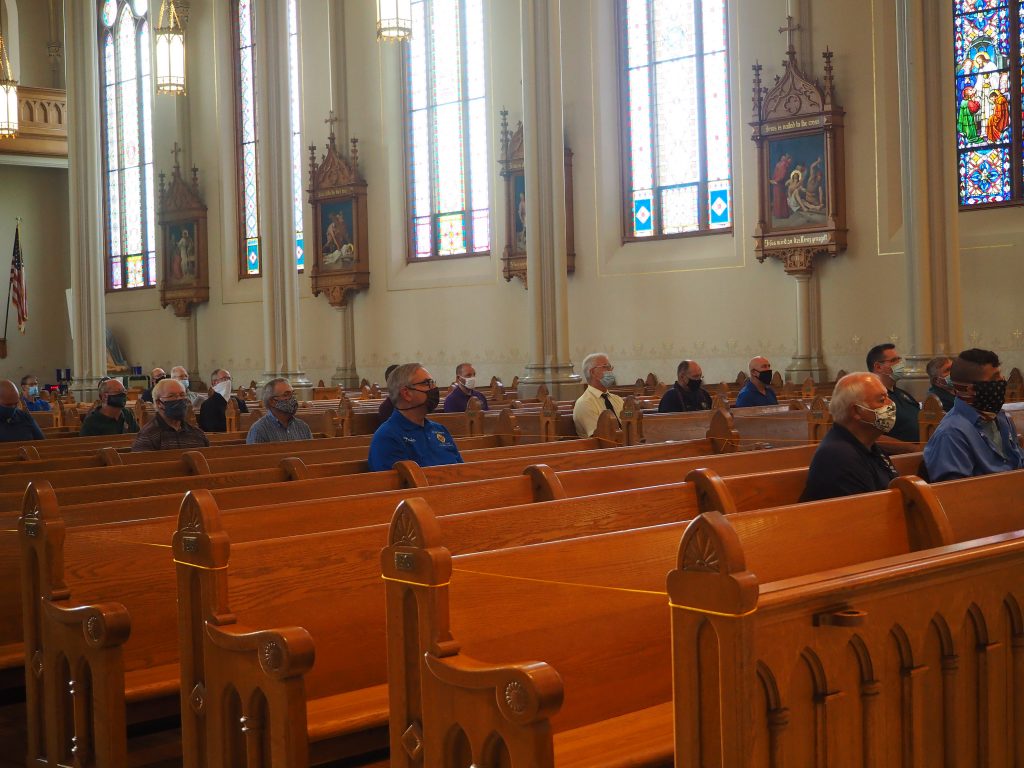 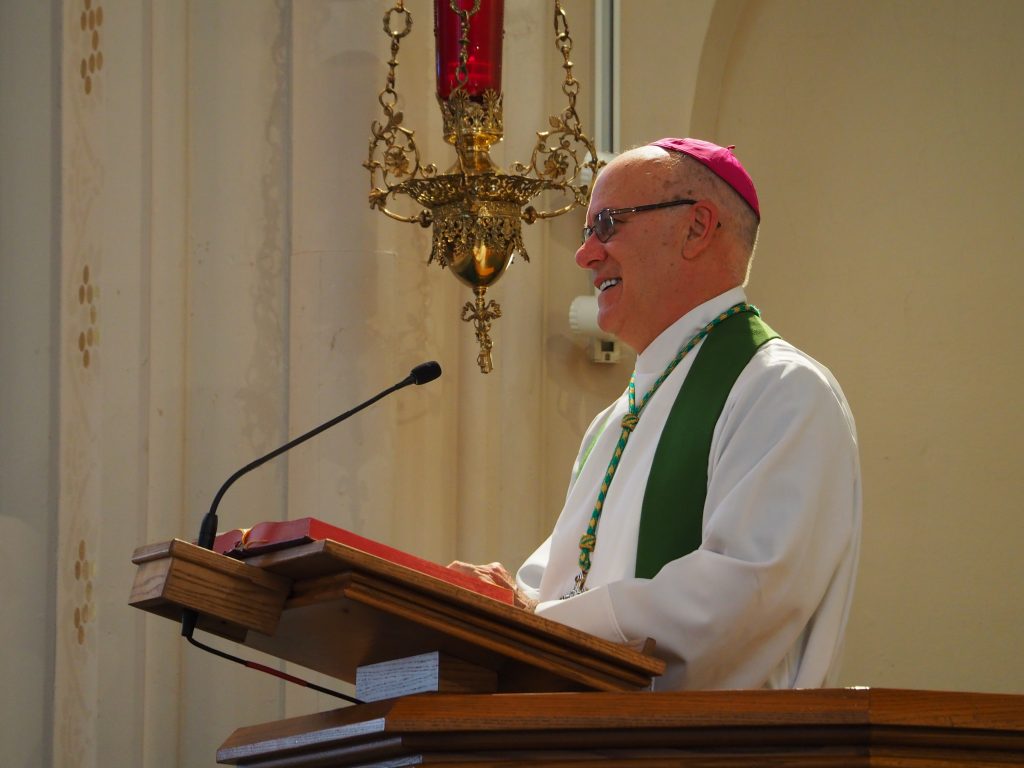 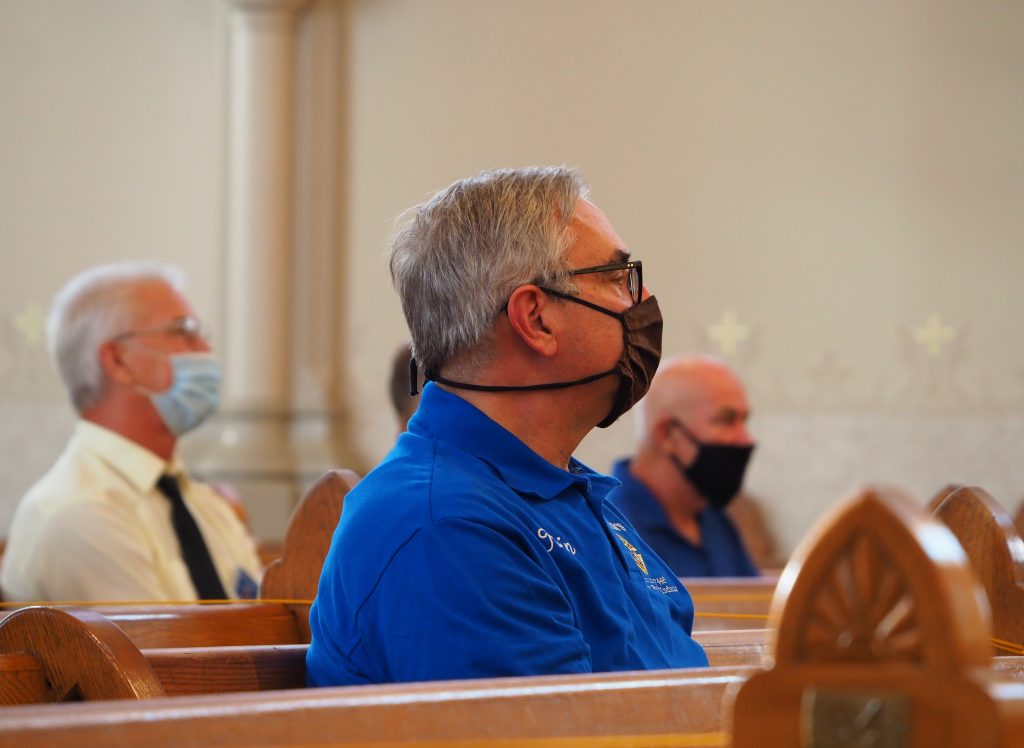 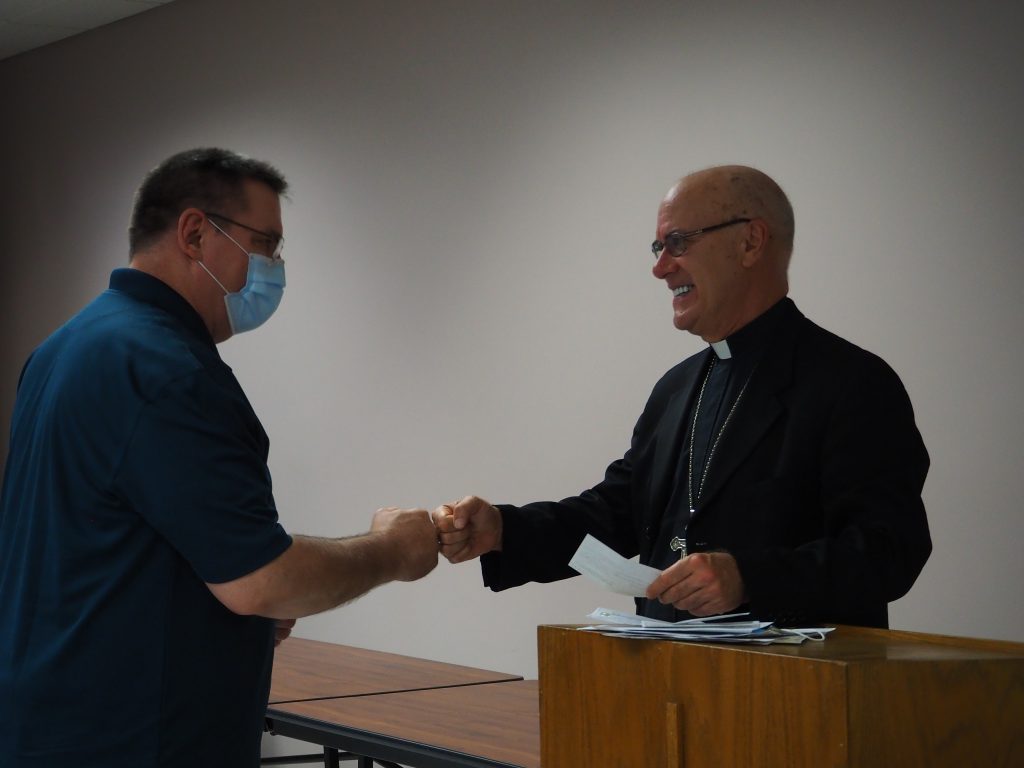 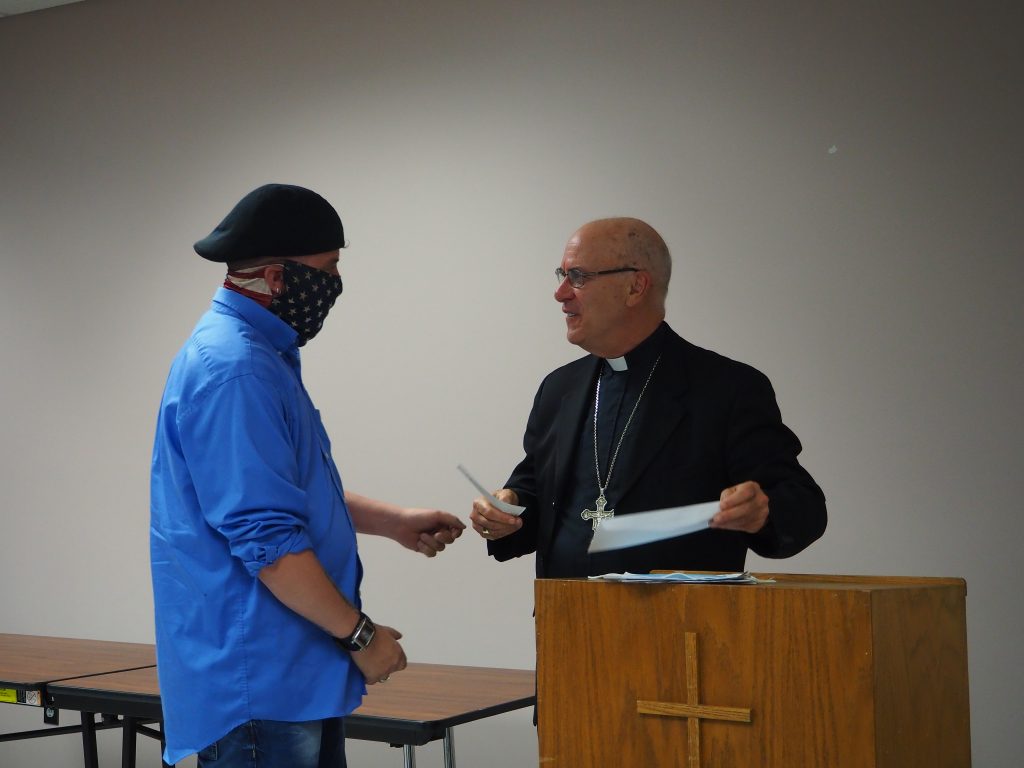 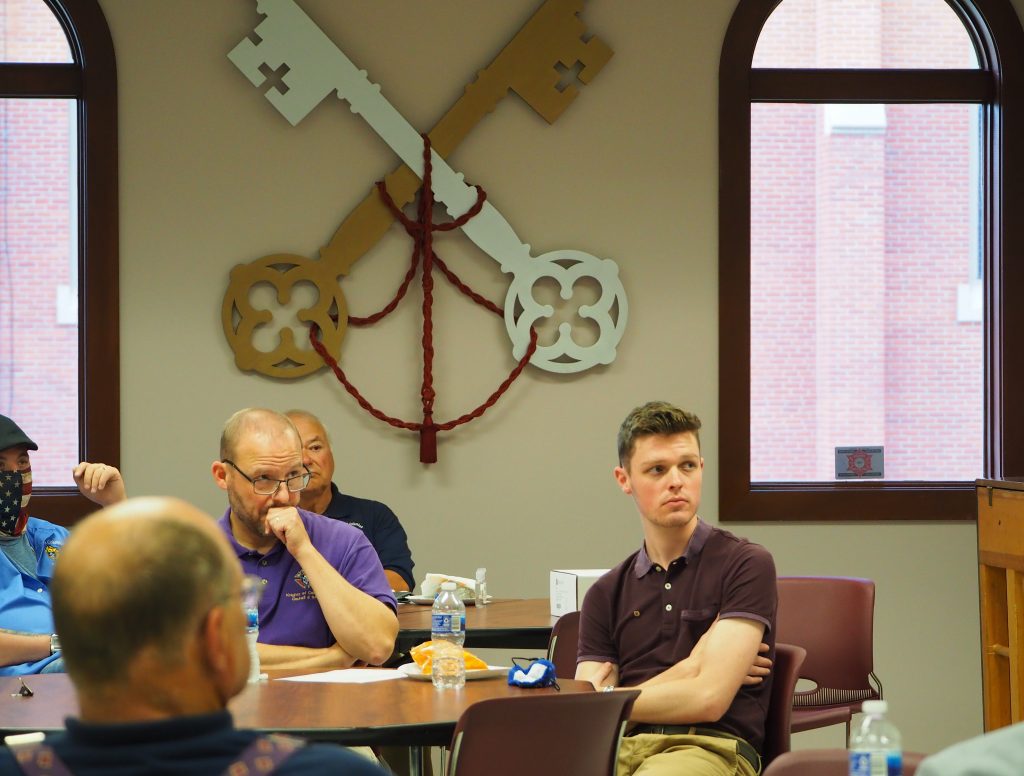