Mike Mittleman’s favorite hymn is “The Servant Song,” which opens with the lines “will you let me be your servant; let me be as Christ to you.”

Mittleman is very familiar with hymns and with the call to service. For 50 years he has served as the music director in three parishes in the Diocese of Fort Wayne-South Bend.

Mittleman’s ministry began in 1971 when he was 12 years old. He loved to watch the organ player at Queen of Peace in Mishawaka, his home parish, and began taking organ and piano lessons himself. Eventually the organist gave him a missalette to take home and practice. It was a Saturday night in August when Mittleman played his first Mass at Queen of Peace. 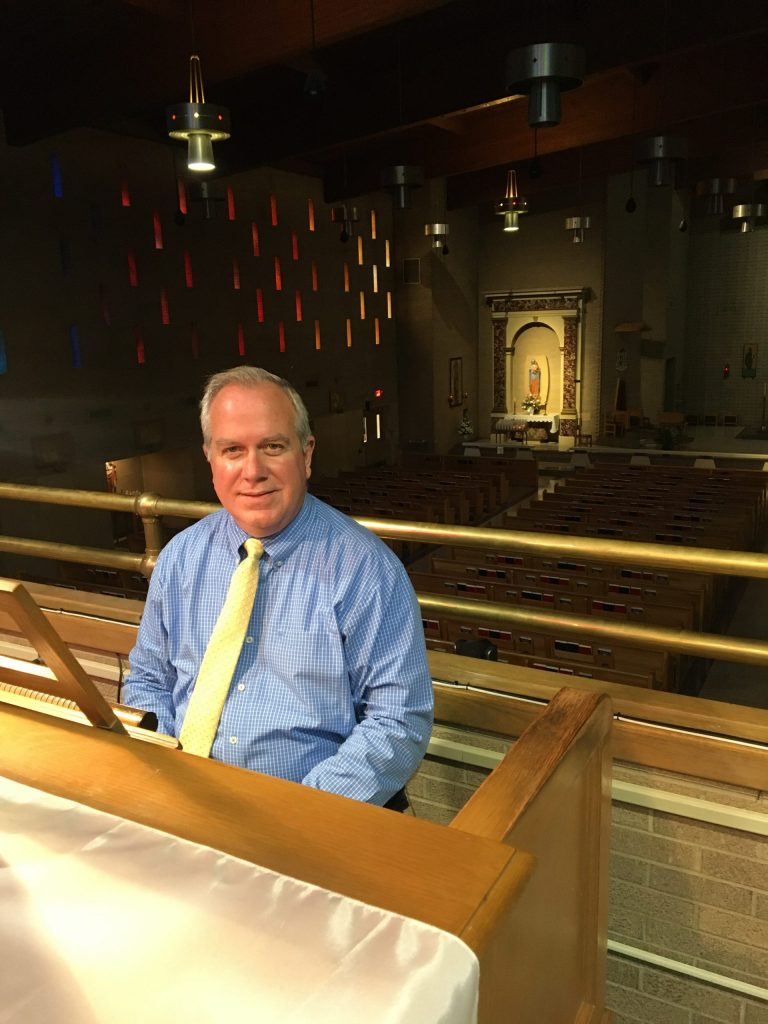 Photos by Mary-Kate Burns
Mike Mittleman is the music minister at St. Matthew Cathedral Parish, South Bend. He was first drawn to music ministry as a child five decades ago: At St. Matthew, he is honored to have played for ordinations and for Bishop Kevin C. Rhoades.

For the first 35 years of his career, Mittleman served as a music minister part time while also working in the RV transportation industry in Elkhart. His free moments were busy preparing music not only for Sunday liturgies, but also for a variety of events and performances. A favorite memory from his time at Queen of Peace is when the choir performed at a Valentine’s Dessert Card Party. He played Kenny Rogers alongside someone playing the role of Dolly Parton, singing “Islands in the Stream.”

Mittleman assumed he would stay at Queen of Peace his entire musical career. He had served there for 17 years when, in 1989, he felt an intuition that something else was pending — “something more majestic and gothic,” he said. Soon after, he got a call from St. Joseph Parish in Mishawaka requesting his services. In the spirit of a servant, he said “yes.” 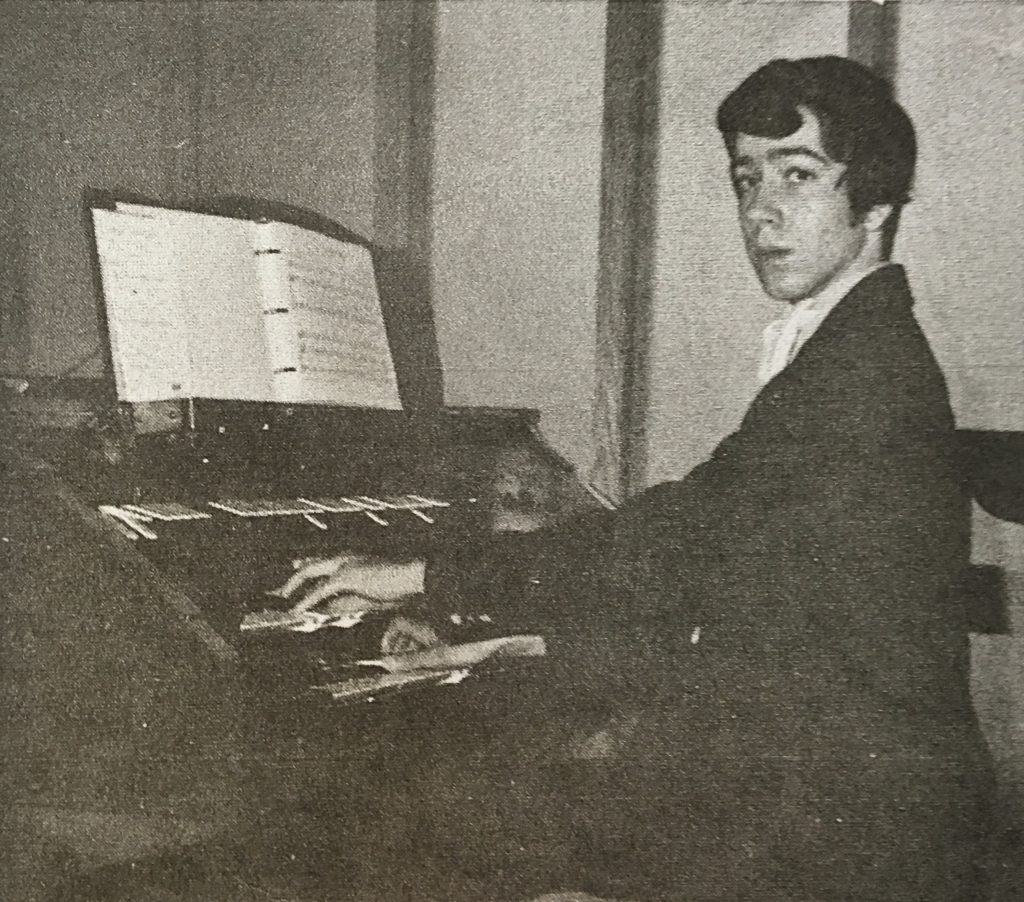 Provided by Mike Mittleman
Mittleman is pictured during the early years of his music ministry at Queen of Peace Parish, Mishawaka.

In his 27 years at St. Joseph, Mittleman found an abundance of blessings and friendships. The choir adopted a stuffed Cookie Monster as their mascot, and Mittleman recalled the time Cookie Monster was taken hostage. He paid the ransom with cookies for the choir.

Building community is important to Mittleman’s work. The St. Joseph Choir served parishioners by playing at weddings, annual concerts for the feast of St. Joseph, the popular holiday craft bazaar and fun events like bowl-a-thons. They Christmas caroled for homebound parishioners and played other charitable events like the St. Vincent de Paul Society food drive and Toys for Tots drives. They played with other Catholic, Presbyterian and Methodist Churches and enjoyed fellowship dinners after. 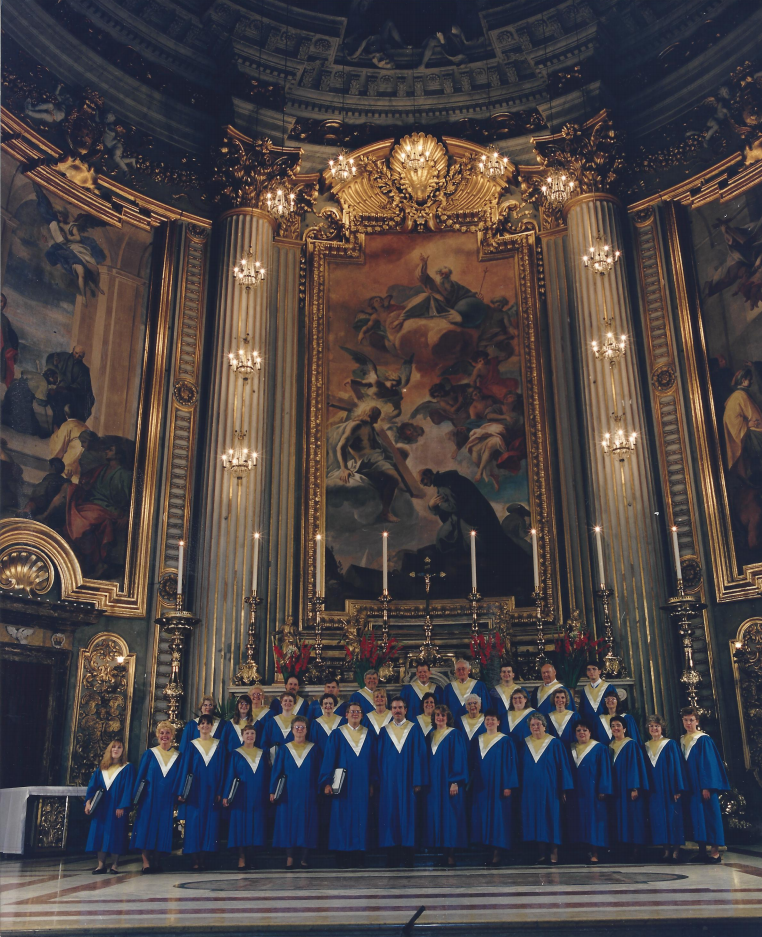 Provided by Mike Mittleman
The choir of St. Joseph Parish, Mishawaka, performed in Rome for Pope St. John Paul II under Mittleman’s direction. During the trip, they also sang at the church of Saint Ignatius in Campo Marzio, above.

The highlight of Mittleman’s career, he said, came during his time at St. Joseph. He had the idea that he wanted to do something big with the choir, so for two years, he planned and fundraised for a pilgrimage to Italy. Thirty-five choir members and 45 parishioners made the 11-day trip to Milan, Assisi and Rome. They sung the High Mass in St. Peter’s Basilica with St. Pope John Paul II. That performance required immense preparations, including a familiarization tour in Italy so he could get a feel for the acoustics.

The practices and fundraising paid off. Mittleman said it was an opportunity to “get to the core or heart of the Catholic Church in Rome,” and that it was “a beautiful pilgrimage of music and prayer.”

In 2017, Mittleman again had the feeling that things were about to change. He got another call, this time from St. Matthew Cathedral in South Bend. On Sept. 1, 2017, he went to the cathedral, where he eventually became a full-time music director for the first time in his career.

Though leaving the community at St. Joseph was a sacrifice, there have been different blessings at St. Matthew, Mittleman said. He has played Masses for ordinations and for Bishop Kevin C. Rhoades, for example. In his full-time position, he can also now play funeral Masses.

Many things currently occupy Mittleman’s working hours. One of his favorites is rehearsing with the 48-student school choir. He wants to make music engaging for the kids, so he ends each rehearsal with a game of musical “Jeopardy.” The winner gets a candy bar.

Preparing music for the Sunday liturgy is a big part of the job. Mittleman said he begins by looking at the suggested hymns from major publishers, then goes to the readings. He wants the music and readings to “come together spiritually in prayer.” He ascribes to the adage that “singing is praying twice,” and believes that music lifts the soul to God in a unique way.

Mittleman has never interviewed for a job in music. He lets the Holy Spirit guide him wherever he’s meant to go, and he intends to continue doing that. After 50 years of service, he has no intentions to retire.

“I might move to part-time or start subbing, but I will always play music for God as long as I’m able to,” he said. In August, he will play three Masses of thanksgiving at Queen of Peace, St. Joseph and St. Matthew Cathedral to celebrate his golden anniversary in music ministry.