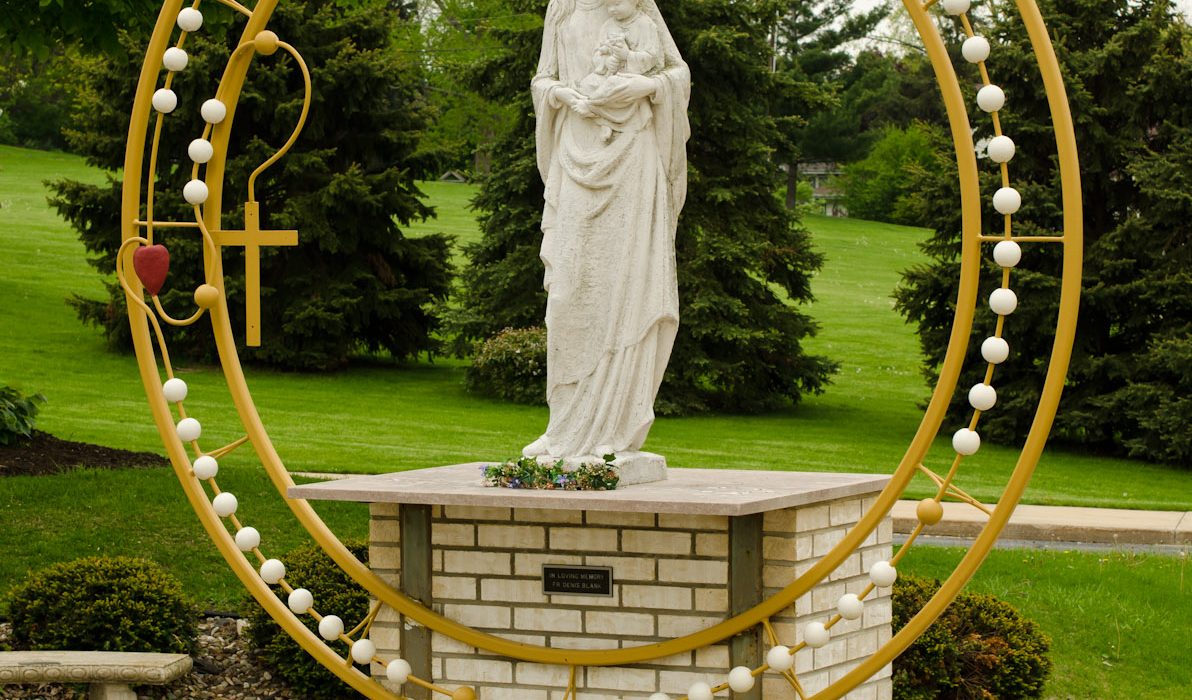 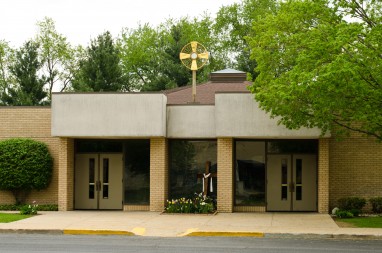 Corpus Christi Church on the north side of South Bend.

SOUTH BEND — Fifty years ago, the parents of one-year-old Terri Herendeen began attending Mass at Corpus Christi Catholic Church on the northwest side of South Bend. Today, Herendeen is the parish secretary and her memory is among the best records of the development of a parish that nurtures a devotion to the Blessed Sacrament.

Years ago, she said, the name of the parish prompted worshippers to establish one of the broadest schedules of Eucharistic Adoration in the diocese. Worshippers attend the Blessed Sacrament in prayer in the chapel from 6 a.m. to 10 p.m. daily.
“When the parish first began, people hoped to have the adoration 24 hours a day. But the parish wasn’t big enough and didn’t have enough people to keep it going,” Herendeen said.

The parish is also known throughout the young neighborhood surrounding it for the processions that take place yearly on their namesake’s feast day.

Prominently located on the roof above the church’s main doors at 2822 Corpus Christi Dr., is a monstrance that further clarifies any ambiguity visitors might have about the mission and heart of Corpus Christi. Herendeen describes the statue as “huge” and said that it came to Corpus Christi at the hands of former pastor Father Denis Blank, who salvaged it from a seminary in Kansas where he sometimes visited friends.

“They were tearing down the building or something and were going to get rid of it. But Father Denis stepped in asked if it could be brought here for the new building.”

Father Daryl Rybicki is the current pastor of Corpus Christi and the fifth priest to be assigned there since 1961. Msg. Elmer Peterson was the first diocesan appointment to the new parish, followed by Father Joseph Horvath, Father Denis Blank and Father Camillo Tirabassi. Fathers Horvath and Tirabassi retired from Corpus Christi, while Peterson and Blank were appointed to other parishes. For a short time, Father Walter Bly also served concurrently with Father Tirabassi.

According to Father Rybicki, at the time of the church’s founding, there existed a concentration of Catholic churches in downtown South Bend. As time went on the center of town was less able to support the number of churches, so the St. Mary’s faith community was moved to the western part of South Bend. For the same reason, Sacred Heart Parish of largely Belgian immigrants was moved to the northwest side to serve the new suburban population in that area.

Because a Sacred Heart Parish already existed at the nearby University of Notre Dame, as well as in Warsaw, the relocated parish was renamed Corpus Christi.

The following challenge was to evangelize the area and build up the new faith community.

“We were in a pretty typical situation at that time, in that, if you’re going to found a new parish, the way to attract families was to found a school as well,” Father Rybicki said. Corpus Christi did just that, erecting a building that served as both a school and housed the church.

In 1985 a separate church building was constructed. The parish also owns a rectory and a convent that houses members of the Daughters of Divine Charity, who have supported Corpus Christi Parish since its inception. The sisters perform services that include teaching, administration of the school, working as assistants to the pastor and visiting the sick. Currently, Sisters Carmella and Paula represent their order in the parish.

The transplanted parish brought well-attended devotions with it to the new location. The Holy Name Society is no longer active, but the Rosary Society enjoys solid support by the approximately 730 member families.

“I think there’s a lot of pride in this parish. The people here are super friendly, too,” Herendeen said.

Annual parish picnics are a big hit with the church’s many young families, who comprise a larger part of the faith community than when Herendeen was a child. Back at the time of the merger, she thought, many of the church’s Belgian families had older children.

Corpus Christi is a medium-sized parish in a comprehensive list of diocesan churches. Its size allows parishioners to get to know the entire parish instead of buttonholing themselves into just one or two ministries and getting to know the people in those ministries.

“There are fewer activities than in a large parish, but the people that are involved don’t just know each other but they know people throughout the church. That’s a definite up side to a smaller community,” Father Rybicki said.

“I would say that in my experience at this parish that it’s very Catholic. Bishop (John M.) D’Arcy was fond of saying that the universal Church should be very Catholic and that’s what I see happening here. There are a wide range of ethnicities represented here, with very wide-ranging ages and interests,” he added. 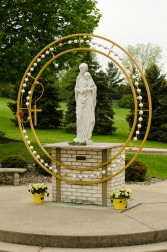 SOUTH BEND — When teachers and administrators talk about the successes of Corpus Christi students, they just as often mention charity as they do academics.

For 49 years, concern for and service to others has been a fitting hallmark of the school named for the Body of Christ. Students in grades preschool through 8 study hard enough to win awards and achieve high ISTEP scores, but they also have a proven track record of taking an active role in helping others. They organize donation drives for the South Bend Center for the Homeless, sometimes as part of the service work required of junior high students, and other times just because there is a need. Last month, the third-grade class had the idea to run a bake sale to help with the medical bills of a former teacher suffering from cancer.

At 284 students, Corpus Christi School is presently about twice the size it was when it first opened. Enrollment has fluctuated and at one time necessitated two classes of each grade level. Currently, only the seventh and eighth grades are large enough to fill two classes each.

Principal Maggie Mackowiak, a longtime Corpus Christi parishioner, missed attending the school herself by just one year. Her family moved to the area and joined the parish when she was a high school freshman. Teaching became her vocation, and by that time she had also decided that she didn’t much want to do it anywhere but at her parish school.

“I’ve always felt that Corpus Christi is where God wanted me to be. I’m very passionate about keeping the school as great as it has been,” Mackowiak said. “I just believe very much in what goes on in this building.”

That’s a consensus among the staff. Many Corpus Christi teachers have held their jobs for 20 or 30 years. Each preschool through fifth-grade classroom also has a full-time aid, many of whom are either retired teachers or young teachers waiting for assignments and who choose to be in the Corpus Christi environment.

The staff members and parents collaborate in a similarly dedicated way during special school events and parish events. Two years ago the parent-teacher association was renamed “Parents and Teachers United in Christ,” or PTUC. The group is responsible for contributing what Mackowiak describes as “nice touches” to the school year, such as running ice cream socials, providing treats after the May crowning event and organizing parent education sessions.

Kathy Leyes is going on her 30th year of teaching at the school. Not only do Corpus Christi students have very supportive parents, she concurred, but there’s also a strong sense of religious unity — due to the perspective of the parish’s pastor.
“Father Rybicki has always really wanted to accentuate the Corpus Christi Catholic community. He regards the parish and school as one community, so functions are open to everyone … we really do have a real sense of that,” Leyes said.

Father Rybicki prefers that all parish events include the school children and vice-verse, she explained. Observances and celebrations such as May crowning or Corpus Christ processions aren’t duplicated but instead incorporate everyone. Older students even join parishioners occasionally to pray outside local abortion clinics.

One of Mackowiak’s goals is for Corpus Christi to be named a blue ribbon school. The federal Department of Education’s national Blue Ribbon Schools Program honors high-performing public and private elementary, middle and high schools and has already recognized Christ the King School.

Several of the school’s students are helping to draw nearer to that goal. Three, in grades 1, 7 and 8, were named state handwriting champs this year. Seventh-grader Michael Nolan took top honors in a recent essay contest sponsored by the regional Right to Life association, and sixth-grader Abby Amat received high marks for a regional science fair project.

The Corpus Christi Cougars hold their own as well. Students participate in basketball, football, soccer, volleyball, soccer, wrestling, cheerleading, baseball and softball. Those abilities complement their academic achievements and spiritual development in ways that, Leyes said, seem to be notable to their secondary teachers.

“We are kind of proud of the students. When they go on to Saint Joe (High School), where a lot of them go, the teachers say you can tell that they went to Corpus Christi. They have study skills and religious knowledge, too. That bumps us up a bit to hear that,” she said.

Corpus Christi students will participate in the June 26 Mass, procession and dinner marking the end of the parish’s jubilee year.