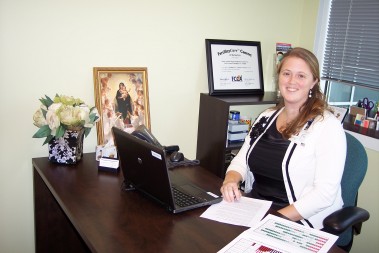 Suzy Younger is manager of the Saint Joseph FertilityCare™ Center on the campus of Saint Joseph Regional Medical Center in Mishawaka.

MISHAWAKA — The Saint Joseph FertilityCare™ Center here has been open only nine months, but already it is assisting clients in five foreign countries and 10 states in addition to clients in the Michiana area. The center attracts such a wide clientele because it can help women of all ages monitor and maintain their own procreative and gynecologic health, according to Suzy Younger, manager of the center.

“Really, what is amazing is that this can benefit every single woman from the beginning of her reproductive life all the way through the end, whether she is breastfeeding and wants to know about the return of her fertility, whether it’s miscarriage or infertility or PMS or post-partum depression or ovarian cysts, there is always some aspect in which we can help her with her medical care, or just knowledge of her body and how it works,” Younger said.

The Saint Joseph FertilityCare™ Center does not treat clients, but rather does education and outreach, teaching women to chart their fertility cycles by observing cervical mucus. This charting not only identifies fertile and infertile days, but also can show patterns that may indicate abnormalities. The center then can refer women to doctors who are associated with the center to do the medical diagnosis and appropriate and morally acceptable treatment, if needed.

The Mishawaka center is affiliated with the FertilityCare™ Centers of America and functions under Saint Joseph Regional Medical Center. It is located on the medical center’s campus in Mishawaka in Suite 408 of the Medical Office Building that adjoins the hospital.

Younger is a certified FertilityCare™ practitioner who has been trained in the Creighton Model FertilityCare™ System at the Pope Paul VI Institute for the Study of Human Reproduction in Omaha. Her colleague, Sarah Pellegrini, is working toward her certification. The two women provide one-on-one training in person, or long-distance training via online video conferencing for people who do not have a local FertilityCare™ Center.

The charting method they teach is highly reliable and precise, Younger said, and is easy to learn, inexpensive, versatile and morally acceptable to all faiths. She said that not only do Catholics show interest, but she also has found high interest among the Amish, as well as people of various religions who appreciate natural and safe methods of family planning or fertility assistance.

“Word of mouth is huge,” Younger said, and as people find out more about the benefits of the center’s education, clients come through a variety of referrals, including priests, doctors, friends, relatives and neighbors. Engaged couples also come to the center through diocesan marriage preparation programs, where the center’s materials are available.

Area doctors also have been very receptive of the program, Younger said, because the center is seen as a resource that is not available elsewhere in the community.

The center does an introductory group session on the Creighton Model every two weeks. Then, if a woman or a couple want to pursue the method, one-on-one follow-up sessions at the center are offered. Typically there would be eight follow-up sessions that would include instructions for charting and chart review that would span a period of 12 months, though Younger said often patterns of abnormalities are obvious sooner than that. Additional sessions may be scheduled if needed, and private introductory sessions may be arranged.

“We’re seeing a huge demand,” Younger said. “Once women get an idea of how powerful this is, and how much of an active role they can play in monitoring and maintaining their own health, they’re hooked.”

Additionally, she continued, this knowledge helps women learn to “cherish that gift of their fertility and understand it more and not see it as something to be feared.”