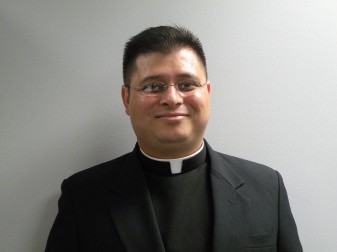 FORT WAYNE — In this Year For Priests, as declared by Pope Benedict XVI, the sanctification of all priests holds special meaning for one young man. Deacon Fernando Jimenez will be the first Mexican born man in the Diocese of Fort Wayne-South Bend to be ordained into the priesthood at a special Mass or ordination at the Cathedral of the Immaculate Conception.

Deacon Jimenez, born in Mexico to Fernando and Floinda in 1980, is the oldest of five boys. He credits his family for caring for his spiritual formation but contends that his vocation was born within his community of 4,000 Catholic people.

“My parents and grandma were faithful to the faith,” says Deacon Jimenez of those who ensured he received the sacraments, went to Mass and attended youth group. But it was within his parish community of Sacred Heart in Mexico, where, he says, he found the germinating seeds of a vocation. “It was in the parish that I was born into the life of Christ,” he says.

At the invitation of a neighboring family to attend charismatic services at the local cathedral, Jimenez, then a first-year high school student, began to have an interest in a vocation. Later during a two-day retreat centered around the purpose of life, he listened attentively to the bishop, who spoke of the priesthood. “Something happened in that moment,” he recalls.

Following a visit to speak with the rector of the cathedral and home visits from local seminarians, young Jimenez agreed to spend one week in the seminary immersed in prayer, community and study time. Encouraged by those at the seminary, he accepted the invitation to join as a second-year high school student.

Jimenez remained in Seminario Diocesano de la Immaculada Concepcion de Celaya throughout high school and two years of philosophy studies in college there. He was ordained into the diaconate in 1998. Then in 1999, his family moved to the U.S. But because of his strong ties to the seminary and people in Mexico he stayed behind.

In the summer of 2000, with permission from his superiors, Jimenez made the trip to the U.S. to be near his family who were parishioners of St. Paul Parish, Fort Wayne, and continue his seminary studies.

After meeting with Bishop John M. D’Arcy, Deacon Jimenez was accepted into the diocesan seminary course of study.

At the end of his successful two-year stay at Boston College where he studied the English language, Jimenez returned to Minnesota where he continued his seminary formation at Immaculate Heart of Mary Seminary. Within two years he had earned a bachelor degree in philosophy. And after studying theology at the Pontifical College Josephinum in Ohio for four years, he earned a master’s of divinity in May.

Of the 13 years he spent in seminary, Deacon Jimenez says, “It was demanding, but we got to build community. That was one of the things I was looking for.”

Following his graduation and a trip to visit relatives and friends in Mexico, Deacon Jimenez was assigned to the Cathedral of the Immaculate Conception in Fort Wayne, where he is involved in taking the Eucharist to the homebound, those in nursing homes and hospitals. He also assists with Masses, preaches twice each week, counsels Catholics and celebrates baptisms at the cathedral and Our Lady of Guadalupe Parish in Warsaw. Deacon Jimenez has his hand in the Education for Ministry program for Hispanics as well.

His personal interests resemble that of any regular guy. He enjoys time spent with friends, watching movies, driving, exercise and reading. Music is another of his passions evidenced by the over 6,000 tunes he owns in several languages.

His parents are proud that he will be the first priest in the family. And his excitement concerning his upcoming ordination shines as he says, “My life and soul will be changed. I want to be a father … I want to listen to the people and show them God is caring for them.”

Following his ordination Jimenez will celebrate his first Mass of thanksgiving on Nov. 1 at St. Patrick Church in Fort Wayne. In December he will visit Mexico and celebrate Mass with his family and friends. “They all have been on this journey. It’s important to celebrate in the parish where I’m from,” he says.