Mexican pierogis — products of an adapted Polish dumpling recipe — are just one sample of the connections of faith and culture made by the Felician sisters who have been based at St. Adalbert Parish in South Bend since 1911.

But in the middle of July, the diverse members of St. Adalbert, where they serve, and nearby St. Casimir Parish, where they are in residence, must disconnect from relationships of prayer, service, formation, friendship and food with the two remaining Felicians, pastoral minister Sister Anthony and school business manager Sister Catherine. New assignments announced by the Congregation of the Sisters of St. Felix of Cantalice, more commonly known as the Felician-Franciscan Sisters, will end the order’s century-long presence in the Diocese of Fort Wayne-South Bend. Sister Mary Anthony Kubat, CSSF, and Sister Mary Catherine Ryzewicz, CSSF, will leave for new duties at the Felician-run Maryville Retreat Center in Holly, Michigan.

Sister Anthony and Sister Catherine said they look forward to new forms of service and new expansion prospects at Maryville, but they will miss the unifying ties they have built with many parishioners in South Bend.

Sister Anthony described her 21 years of ministry at the parish as an outreach that included bringing the holy Eucharist to the homebound and hospitalized; plus accompanying local families, many of whom embody the neighborhood’s Polish history.

“We’ve been with these people through everything,” she reflected. “They know they were loved and cared for, and they know they’re going to continue to be.” She added that those unable to attend Mass in person still find joy through the Church. They ask the sisters about the news going on among parishioners of all backgrounds, she said.

Sister Catherine, who has been at the parish since 2009, said change can be difficult, but trust in God’s will is a Felician watchword. “As we’re preparing for this move,” she said, “I keep hearing the Scripture [in which Jesus said], ‘I have to go so the Holy Spirit may come.’ We have to depart so that something new can be born here.”

The two sisters live in the former rectory at St. Casimir Parish. A building on the St. Adalbert grounds, now the parish offices, was a convent for more than a dozen Felicians after their arrival early in the 1900s.

When Sister Anthony arrived in 1997, the number of Felicians in residence had already dwindled, although they remained a strong resource.

Members of the vibrant international congregation had started coming to the United States in the late 1800s to provide teaching and other acts of discipleship, especially to those in need. Blessed Mary Angela Truszkowska founded the Felician-Franciscan congregation in Poland in 1855.

The chapel in the former convent at St. Adalbert is still used regularly and has seen a rebound in weekly eucharistic adoration, the sisters said. They’re inspired by the love for the Eucharist shown among the young and the old and among the two parishes’ robust Hispanic population, as well as groups with other histories.

Broad support for the eucharistic procession for the feast of Corpus Christi — the Solemnity of the Most Holy Body and Blood of Christ — “just gives me chills,” Sister Anthony said. She recalled observing many seeds of faith planted and growing in profound ways during her South Bend years.

The transition to largely Spanish-speaking assemblies is just one of the local changes the Felician sisters have seen. Others include social and economic shifts, as well as the closing of the nearby St. Stephen Parish in 2003, the merging of administration with St. Casimir and the switch from diocesan priests to Congregation of Holy Cross pastoral leadership.

“I like to think that our presence has helped the people through those things because we have remained constant during some of those changes,” Sister Catherine said. They still offer widespread words of comfort and understanding, “or just a smile.”

Amid any changes or uncertainties, Sister Anthony said, “love is the thing that holds together.”

The sisters, while not bilingual themselves, lauded the growth and energy of the Spanish-language gatherings, as well as adult engagement in the strengthening of St. Adalbert School. 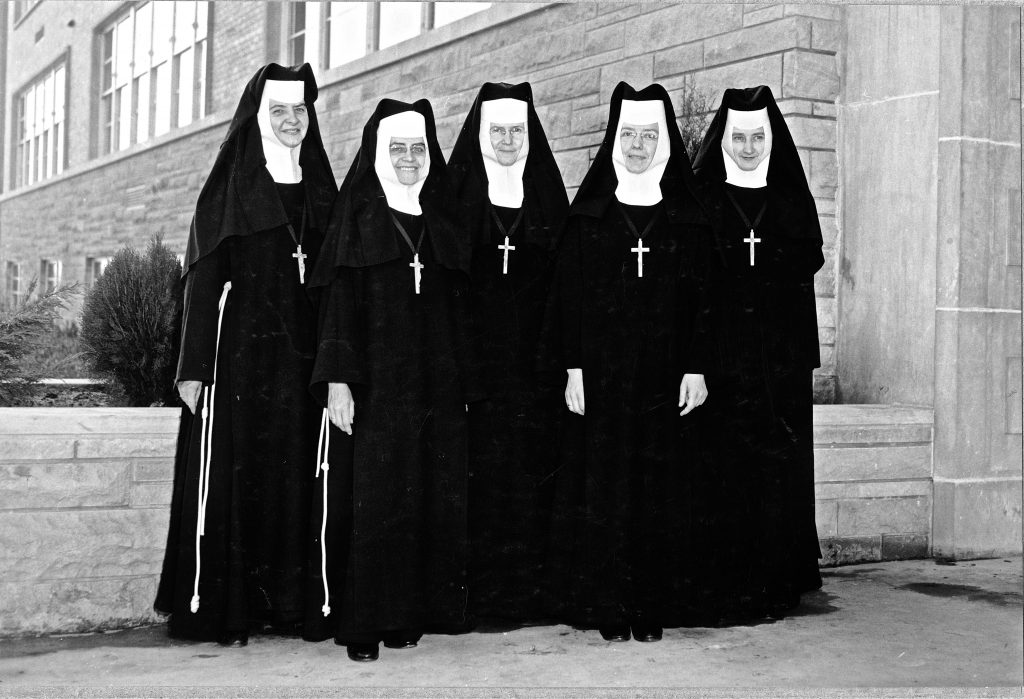 They have helped guide various programs of English-language prayer and faith formation at St. Casimir, part of the dynamics giving the parishes and various groups or generations additional common ground. They assist with liturgical ministries, scheduled group activities and everyday encounters with people — such as cooking.

“It’s a lot of work, but it’s a lot of fun, too,” Sister Anthony said of their kitchen volunteerism, whether it be for fish fries, or bingo lunches or corn-and-sausage roasts.

A few years ago, they accepted the challenge of producing a food for the St. Casimir corn-and-sausage festival to symbolize cultures coming together. They said they made many dozens of Hispanic-style pierogis in addition to traditional Polish flavors. Their new recipe contained chorizo sausage, refried beans and chihuahua-style melting cheese.

After the community around and beyond St. Adalbert and St. Casimir parishes says goodbye to Sister Anthony and Sister Catherine on July 14, the sisters’ outreach of making connections, planting new possibilities and optimizing change will adopt a new flavor, too — at Maryville.

But they said they expect the basics to hold true at the new location, envisioning a Michigan lakeside retreat center that can build bridges between the Diocese of Lansing and the Archdiocese of Detroit and allow people from many backgrounds to find more fertile time and space for prayer.

“If there’s one thing we know,” Sister Catherine said, “people hunger for the Lord.”