“Buenos dias!” Luis Salgado greeted the several hundred people who gathered in the historic church to honor Mary with an hour of songs, serenades and cheers. Mass followed at 6 a.m.

Joining in the festivities, which included a breakfast after Mass of hot chocolate, sweet breads and tamales, was Father Thomas Shoemaker, pastor of St. Charles Borromeo Parish in Fort Wayne, St. Charles parochial vicar Father Dennis DiBenedetto and about six of their parishioners. They attended as part of a growing relationship between the two parishes that has become even more meaningful in these divisive times. 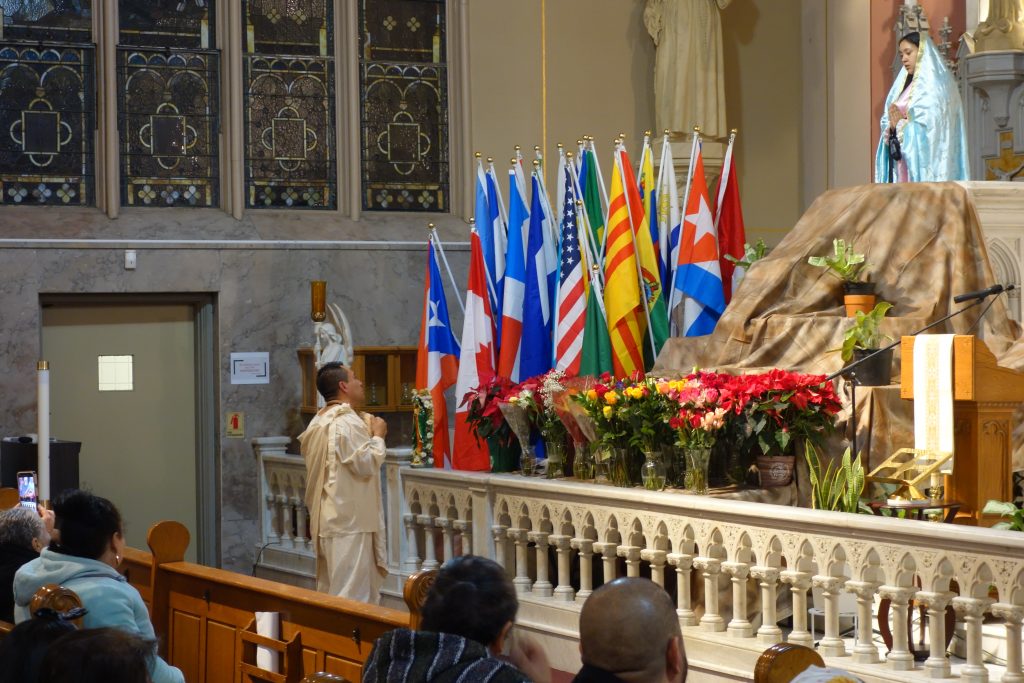 Photos by Kevin Kilbane
Members of St. Patrick Parish in Fort Wayne portray St. Juan Diego, left, and Our Lady of Guadalupe, upper right, as they act out the story of Mary’s appearances in 1531 to Juan Diego, a peasant in Mexico. The portrayal took place during feast day festivities at St. Patrick, which serves a large Latino community. The flags in the background represent the many countries and cultures of St. Patrick parishioners.

The presence of staff and members of the mostly white, suburban St. Charles parish shows connection with and support for local Latinos, said both Father Nam Vu, SVD, parochial vicar at St. Patrick, and Deacon Victor Sandoval, who was born in Mexico. About 85% of St. Patrick parishioners are of Latino descent, Father Vu said.

The relationship between the two parishes also shows “the whole country is not against us,” Deacon Sandoval said. “Our people are happy to see that.”

The feast day of Our Lady of Guadalupe commemorates Mary’s three appearances in December 1531 to Mexican peasant Juan Diego, who later was canonized.

She appeared to him as a mixed race woman standing on a crescent and in front of the sun, both symbolic in the Aztec culture. Millions of native people in what is now Latin America converted to Catholicism after her appearances.

She serves as a model and mother for all and points people toward her son, Christ the King, Deacon Sandoval said. 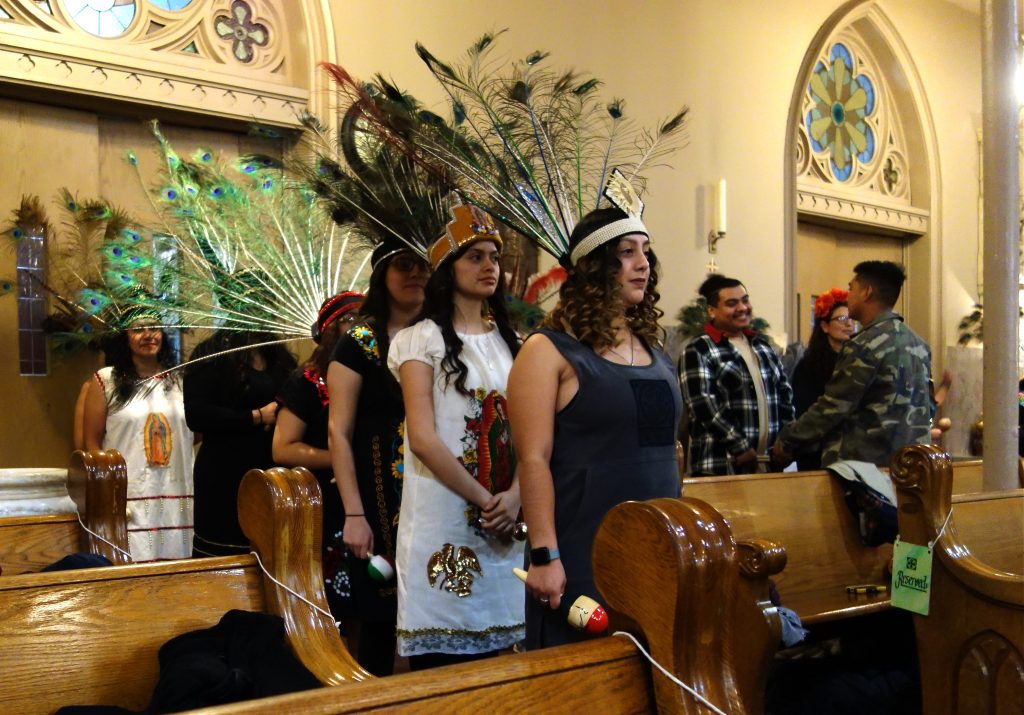 Young women and girls in Aztec-style costumes prepare to walk toward the altar for a native dance during Mass on the feast day of Our Lady of Guadalupe Dec. 12 at St. Patrick Church in Fort Wayne. The dance is a tradition in Mexico, where Mary appeared to Juan Diego in 1531.

St. Patrick parishioners reenacted the apparitions during a celebration before Mass began. Young ladies of the parish, who dressed in Aztec-style costumes and wore large headdresses of peacock and other feathers, then performed native dances, a traditional part of Our Lady of Guadalupe observances in Mexico, Deacon Sandoval said.

Father Vu gave his homily first in English and then in Spanish.

“Dear brothers and sisters, it is a great joy to have you among us,” he said to the St. Charles visitors and other non-Spanish speakers, before continuing in Spanish with the Mass.

The relationship between the parishes dates back decades. When St. Charles was founded in 1957, pastor Father Edward Hession faced challenges in raising money to build a church. Father Hession, who later would become a monsignor, had served for the previous 16 years as a parochial vicar at St. Patrick, where he was “beloved,” Father Shoemaker said.

Because of that connection, the people of St. Patrick Parish donated $11,000 to buy pews for St. Charles’ first church. The church suffered severe damage in a 1963 fire, but it was rebuilt before the growing parish moved to its current, larger church in 1975.

St. Patrick parishioners also donated a chalice for Father Hession for use at St. Charles, something Father Shoemaker discovered when he looked at the bottom of the chalice he has used at Mass.

In the decades since, St. Charles grew into one of the largest parishes in the diocese. St. Patrick declined in membership but since has become a hub for ministry to Fort Wayne’s Latino and Vietnamese Catholic communities. 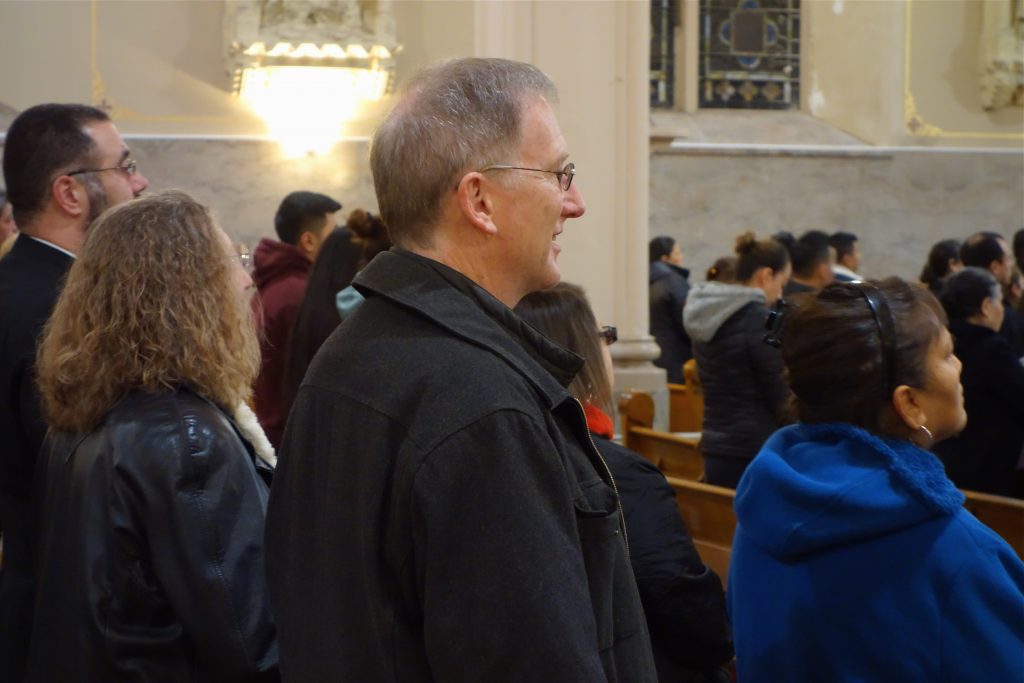 Father Thomas Shoemaker, right, pastor of St. Charles Borromeo Parish in Fort Wayne, and other representatives of the parish attended the Our Lady of Guadalupe festivities and Mass. St. Charles and St. Patrick have been building stronger connections among their members.

Some years ago, St. Charles began “twinning” with St. Patrick to provide financial support to the parish that had once helped it so much. St. Charles members also collect items for the food pantry operated by St. Patrick, including about 4,500 pounds of goods during a recent drive, Father Shoemaker said.

Father Shoemaker, who became St. Charles’ pastor in October 2016, also thought it would be helpful to develop a more personal connection between his parish and St. Patrick.

“Our goal is not just financial things going back and forth between the parishes, but that we get to know each other,” he said.

St. Charles members benefit from exposure to the Latin and Vietnamese Catholic culture of St. Patrick’s families, he added. Father Shoemaker has traveled to many areas of the world.

“I think it opened a lot of people’s eyes that we are a way-bigger Catholic Church than what is here on the corner of Trier and Reed (roads).” 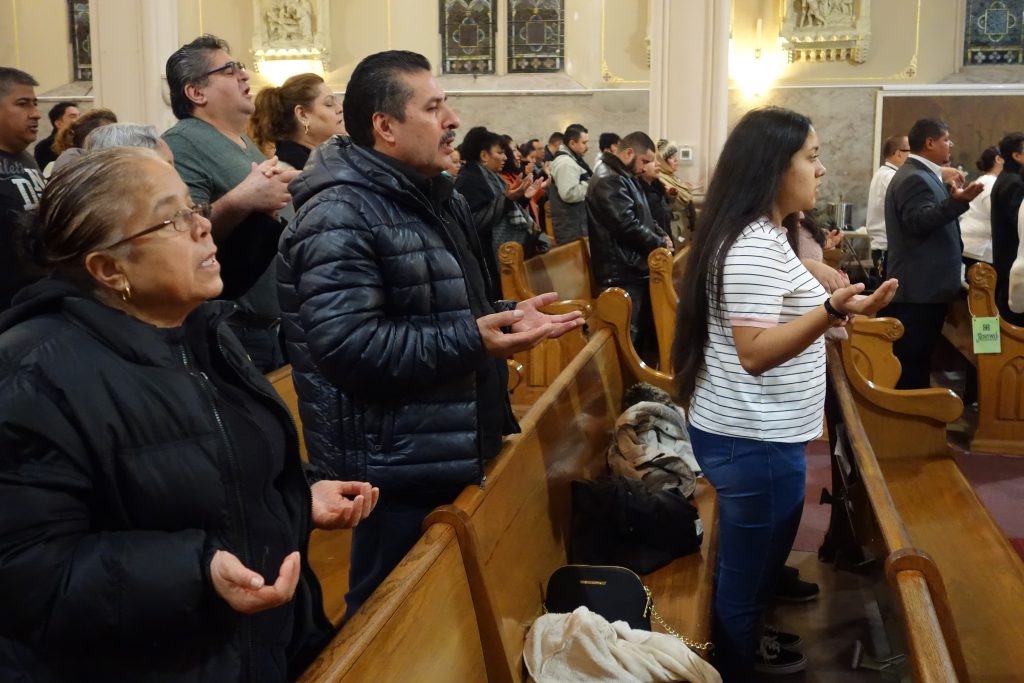 People pray the Lord’s Prayer during Mass , which began at 5 a.m. About 85% of St. Patrick parishioners are Latino.

He also hopes St. Patrick parishioners feel they are part of a much larger Catholic Church and community than their cultural groups.

“It has been like brothers,” Deacon Sandoval said of the connection between the parishes.

The two churches started by reaching out to both parish councils and arranging for them to meet for dinner, Father Shoemaker said. St. Patrick parishioners invited St. Charles members to attend their annual celebrations for the feast day of Our Lady of Guadalupe on Dec. 12 and for the Tet Vietnamese New Year, which this winter will take place on Jan. 25.

Last year, St. Charles invited the St. Patrick parishioners who act out the Lord’s Passion on Good Friday morning to present their ministry in the afternoon at St. Charles. The authentic presentation was very emotional and moving, Father Shoemaker said.

“As Jesus was carrying the cross, they were whipping him constantly,” said Bob Carroll, St. Charles business administrator, who attended the presentation. “It made you feel to an extent you were there and it (Jesus’ suffering) really was worse than we thought it was.”

Carroll also joined about a dozen St. Charles members who attended the Tet celebration two years ago at St. Patrick. The St. Charles group missed last year but hopes to return this year.

The experiences with St. Patrick parishioners broadens his perspective and enhances his faith, said Carroll.

“It kind of makes you feel good to see it’s not the U.S., it’s all over the world — this is Catholicism. This is the kind of stuff that brings us all together.”