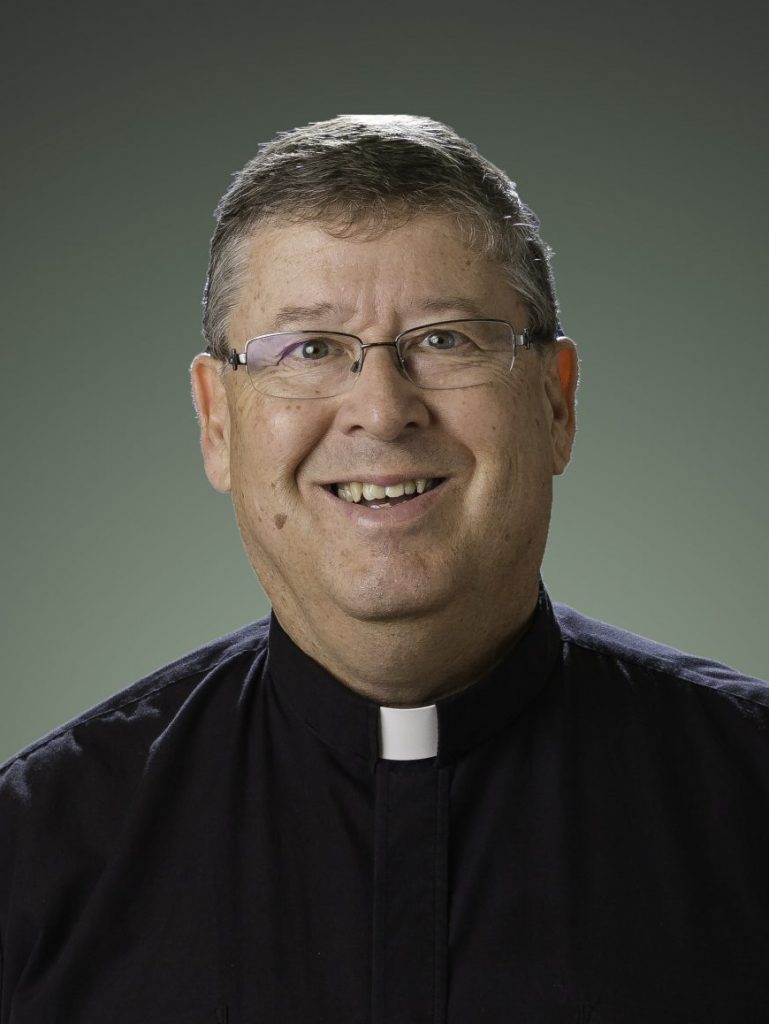 As Father David Voors reflects on his four decades of ministry, a handful of passions have developed, he said. Some of the passions have grown into traditions that are implemented in each of the parishes where he has served.

One tradition has been to place a flagpole at every parish to which he was assigned. Growing up, Father Voors was “in charge” of the home flagpole, which led him to want to have a flagpole erected to display the American flag.

Perhaps that dedication to the Blessed Virgin Mary was cultivated by his parents beginning when he was very young. Father Voors is the middle child of seven children: They were a close family who enjoyed laughter, he recalled. He also remembered his parents encouraging all their children to “Listen and say, ‘Yes,’ to God’s calling, whether it be to the priesthood, consecrated life or marriage. His uncle, Msgr. William Voors, was also a beloved priest of the Diocese of Fort Wayne-South Bend and a good example and influence in his nephew’s call. He would often stop over to see his brother’s family.

It was in his seventh grade year that Father Voors first heard a calling to the priesthood. He attended Divine Heart Seminary, Donaldson, for his freshman year in high school, but after a year discerned that the Missionary Order of Sacred Heart Fathers was not the fulfillment of the calling. After high school, he worked at Lincoln Life for two years but continued to hear a call from God. Father John Pfister, vocation director for the diocese at the time, continued to encourage him to explore the possibility that he was being called to the priesthood.

Father Voors entered St. Pius X Seminary college in Erlanger, Kentucky. It was a four-year college built to hold 94 students, but “there were at least 120 students there with me. It was a great four years,” he recalled.

For graduate school in theology, the late Bishop William McManus allowed Father Voors to “pick whatever seminary I would like.” He visited St. Meinrad in southern Indiana; the Josephinum in Columbus, Ohio; St. Vincent Seminary in Latrobe, Pennsylvania; Dunwoodie Seminary in New York; and finally Mount St. Mary’s in Emmitsburg, Maryland. It was here that God let Father Voors know with a great peace, “This is the place.” In 1981, he was ordained to the priesthood.

Father Voors has served in six parishes in the 40 years since his ordination. His first six years were as an associate pastor at St. Matthew Cathedral Parish in South Bend, and then he was pastor of St. Michael Parish in Plymouth for a decade. He then served as pastor of Our Lady of Good Hope Parish, Fort Wayne, for eight years, followed by a dozen years at St. Mary of the Assumption Parish in Decatur. He recently received his latest assignment, again to a St. Mary of the Assumption Parish, but this time in Avilla, after spending the last five years as pastor of St. Elizabeth Ann Seton Parish in Fort Wayne.

Father David Voors will celebrate his 40th year as a priest June 20. When asked to reflect on his ministry, he stressed the importance of people and how blessed he has been with “thankful friendships, based in our Lord, that have lasted many, many years.”

As a young man and through most of priesthood, the charismatic prayer group and devotions have always been important to him. In addition to staying close to the Blessed Virgin Mary, Father Voors said he loves to be able to offer the sacrament of confession and the holy Mass.

During this jubilee year, he remains thankful for the example of my parents, brothers and sisters and in-laws, friendships that continue from all the parishes, and the great example of the late Auxiliary Bishop Joseph Crowley at his first assignment. He fondly remembers jogging around the neighborhood of St. Matthew Cathedral and running in the Blueberry Stomp as a young priest and pastor in Plymouth. He jokingly noted, “My years of enjoying pizza has slowed this down a lot.”

He loved seeing the numbers grow at Our Lady of Good Hope, he said, and the strong faith of so very many families there as well as the parish in Decatur working together to build a new parish center. St. Elizabeth Ann Seton will be remembered by Father Voors for its large crowds for confessions and the good numbers for adoration.

Regarding his future years in ministry, Father Voors realizes that he seems to be “slowing down” a bit. He hopes to continue to serve God as best he can. He said, “Priesthood is a gift to share as best I can.”