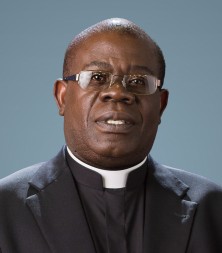 Father Thadeus (“Tad”) Balinda will observe his 25-year anniversary of priesthood on June 27 in Uganda, where he was ordained. His local parish, St. Patrick, Arcola, where he has served as pastor since 2013, celebrated the occasion on Sunday, June 11, with a thanksgiving Mass at noon, followed by a luncheon in the parish hall.

“I was born in 1963, in the land of the Uganda Martyrs,” said Father Balinda. Between 1885 and 1887, a group of 23 Anglican and 22 Catholic converts in the Kingdom of Buganda, now part of Uganda, were executed, he related. The 22 African Roman Catholic martyrs collectively were beatified by Pope Benedict XV in 1920 and canonized by Pope Paul VI on Oct. 18, 1964. Their feast day is June 3.

Father Balinda is the youngest of six boys and two girls. Three brothers are deceased. Following his elementary education in 1978, he entered St. Mary’s Minor Seminary in the local Diocese of Fort Portal. His father, Thomas Balikigamba, was a lay catechist serving at missionary outstations during prayer sessions when a parish priest could not be present to celebrate Mass. His ministry made a great impression on young Balinda.

Following his ordination in 1992, Bishop Paul Lokiru Kalanda assigned the new priest to serve as an associate pastor at the local Cathedral of Our Lady of Snows. He was only there for seven months, however, when he was asked to assume the duties of pastor at Christ the King, a missionary outstation in Kampala, about 50 kilometers (31 miles) away.

For three years Father Balinda was busy physically building up the parish, with a new rectory and improvements to the church. He was then asked to study cannon law in Rome. Not only was it the first time he would be away from home, but the three-year course was taught in Italian. He was given one month to learn the language.

Father Balinda had completed a master’s degree when a civil war involving Uganda broke out in August 1998. He returned home and was assigned the position of judicial vicar, overseeing the diocesan tribunal and judiciary from 1999 to 2009. In addition, after completing his doctorate degree, he began serving as rector of St. Mary’s Minor Seminary; in June 2004 he was assigned to be vicar general of the diocese.

After a while, the priest realized “I needed a sabbatical, a change of pace.” His new superior, Bishop Robert Muhiirwa, knew the late Bishop John M. D’Arcy of the Diocese of Fort Wayne-South Bend, so Father Balinda journeyed to Fort Wayne and met with him. Bishop D’Arcy asked if he would serve in the tribunal. “Then, when I humbly asked Bishop D’Arcy if I could return to parish ministry, he was very kind and understanding. I was assigned in 2009 as pastor of St. Mary of the Lake in Culver.”

In 2013 Bishop Kevin C. Rhoades appointed Father Balinda pastor of St. Patrick, and the following year incardinated him into the local diocese.

“I really feel at home here at St. Patrick’s,” he said. “There’s such openness, love and genuine concern. That’s partly because the two international priests who preceded me — Father Cyril Fernandes and Father Alex Dodrai — made such a good impression.” In addition to parish work, he also enjoys serving as rector and teaching in the seminary. “It’s both exciting and humbling to participate in the formation of future priests,” he said.

Father Balinda considers himself fortunate to be able to return to Uganda annually to visit his family.