The Nov. 18 beatification ceremony of Franciscan Father Solanus Casey (1870-1957) in Ford Field in Detroit will convene the faithful from around the world, including many who encountered the holiness of this beloved friar not so long ago, and not so far away. 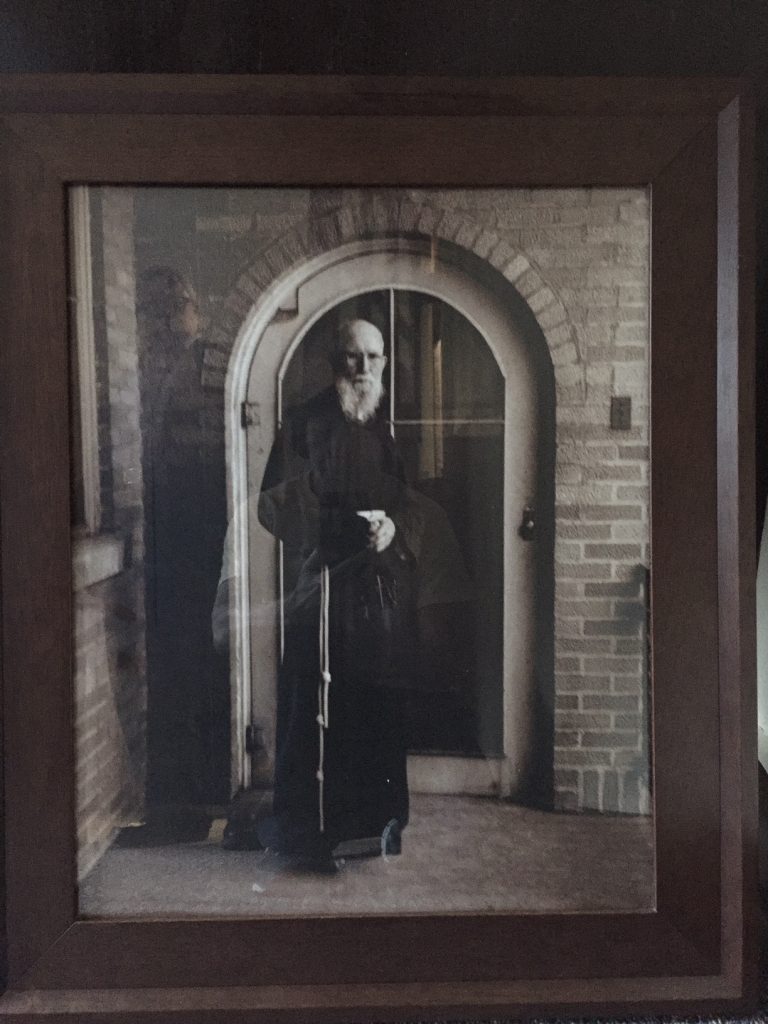 This iconic photo of Father Solanus Casey at one of the doors of the St. Felix Friary now hangs inside the former friary. — Gabriela Mayo

A contingent from the Diocese of Fort Wayne-South Bend, along with numerous other individuals, will travel to the Mass, spurred on by the powerful compassion Father Casey exhibited during 10 years of residence in Huntington. The humble Capuchin’s legacy endures today at the city’s St. Felix Catholic Center, reflected in people’s memories of healing and hope, and in organized efforts to spread the word about his lifetime of gratitude to God and urgent concern for the poor and the sick.

“I try to inspire people to seek that knowledge [about Father Casey] so they can love him more and carry on his mission here in our diocese,” said Jan Scher, who directs the Father Solanus Guild-Huntington Extension and provides personal remembrance and prayer support to activities at the St. Felix center. Scher works closely with the guild’s headquarters, the Solanus Casey Center at St. Bonaventure Monastery in Detroit, encouraging education and various forms of support to advance the day when Father Casey, who now will be called “Blessed,” may be canonized as a saint of the church.

A basic education about Father Casey includes several points. Mediocre grades throughout his years of schooling and formation prompted the Capuchin Franciscans to welcome him as a “simplex priest” — validly ordained but not permitted to preach or hear confessions. He celebrated his first Mass on July 31, 1904, at St. Joseph Parish in Appleton, Wisconsin.

First assigned to monasteries in the New York area and limited to certain assignments, he embraced the task of doorkeeper. He welcomed and prayed with visitors; he became known as a caring listener who valued each person and offered simple and candid comfort. People sought him out to discuss their sufferings, and many began to report cures of ailments. Regardless of his career prospects, Father Casey became known for his deep trust in God’s goodness. He is identified with the maxim “Thank God ahead of time” and “Blessed be God in all His designs.”

His reputation — and the quantity of visitors and healings — continued to grow after he moved to the Detroit monastery in 1924. Father Solanus then became burdened with illness himself, including a painful and debilitating skin disease. To allow him rest from long, difficult days, the Capuchins placed him at St. Felix Friary, the 30-acre Huntington site used as a novitiate, from 1946 to 1956. Then, with his illness worsening, he returned to Detroit. He died on July 31, 1957. 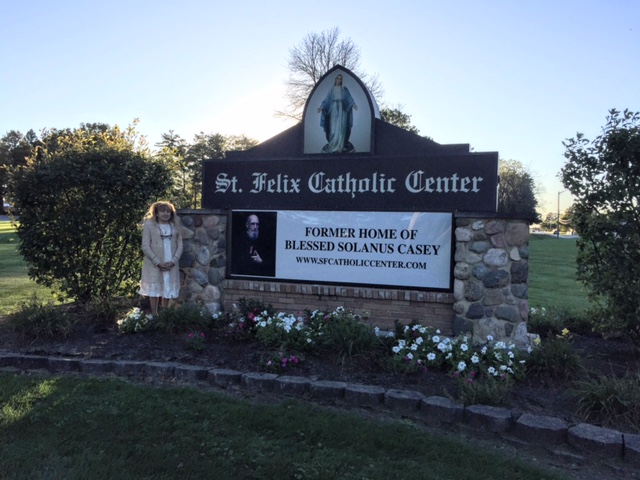 Jan Scher, director of the Solanus Guild-Huntington Extension, stands next to a sign at the St. Felix Catholic Center in Huntington, which notes that the soon-to-be-beatified Father Solanus Casey lived at that location for a period of time in the mid-1900s. — Gabriela Mayo

Scher, who was born in Huntington in 1947, pointed to an encounter with Father Casey at St. Felix Friary as the cause for her ongoing zeal. Medical problems threatened Scher’s survival from her infancy, so her faith-filled Catholic parents took her to the friary. Father Casey was still receiving numerous visitors at that time — and corresponding with many others — despite the mandate for his recuperation.

“Father Solanus blessed me, and he said I was going to be fine,” Scher said in a recent interview. She was a baby, so she knows this story from her parents. But a pattern of stories has emerged in her life to prove him right. Despite a range of medical emergencies that could have been fatal, given her weakened condition, Scher said she has survived each trial and has left doctors puzzled.

She pursued a teaching career and has remained a parishioner at Sts. Peter and Paul Church, which was administered by the Capuchins until recently. With profound gratitude to her parents and to Father Casey, she became a strong proponent for the cause of his canonization.

Scher professed as a member of the Secular Franciscan Order, following in her parents’ footsteps. But it wasn’t until 2012 that she was able to follow up with roles at the novitiate site, including the establishment of a Father Solanus Guild extension.

The novitiate had closed in 1978 amid declining vocations. Before long, the site was sold to a Christian denomination that operated it for about three decades. Around 2009, with the aging structure increasing unlikely to survive intact, Father Ron Rieder, the Capuchin Franciscan pastor at the time, of Sts. Peter and Paul Parish, showed the site and told the backstory to John Tippmann, a Fort Wayne philanthropist who founded the Mary Cross Tippmann Foundation, named for his mother. The foundation purchased the property and reopened it after extensive renovations spanning a couple of years. The site is now called the St. Felix Catholic Center.

“It was a tremendous blessing from God,” Father Rieder said of the Tippmann Foundations’ investment in the friary. That investment continues today, as the foundation employs a general manager to ensure the site’s upkeep.

The center’s operations have evolved since 2012, and the entire grounds, including the chapel which anchors the large residential structure, are now used frequently for weekend retreats, tours for students, Father Solanus Guild meetings and special days of prayer. Groups from the diocese reserve weekends far in advance, according to retreat coordinator Gabriela Mayo. Individuals and groups from across the United States and other countries have come to visit the Indiana enclave, drawn largely by the fact that the room Father Casey once occupied has been carefully preserved.

“I’m sure Solanus would be very pleased with the use of [the center] today, knowing there are times of retreat and people stopping in the chapel to pray,” said Brother Richard Merling, national director of the guild and the Detroit-based postulator working with the Vatican on the friar’s steps toward sainthood. Father Casey did not find at Huntington the physical rest his superiors expected him to receive, because busloads of visitors continued to come; but the former doorkeeper did not complain or turn anyone away. “He loved it down there,” Merling said.

Father Rieder said his time in Huntington allowed him to hear many stories from people whose lives had been touched powerfully by Solanus. The pastor himself, who has retired to Appleton, was also personally touched by witnessing the self-donation and humility that rose above Father Casey’s struggle with disease. The brother Capuchin Franciscans had also both lived at St. Bonaventure Monastery in Detroit in 1956.

“I was privileged to play the organ at our High Masses in the public chapel, and Solanus would stand next to me every morning, singing,” Father Rieder recalled from his days as a young friar.

He added one of his own stories to the many that can be heard among current and former members of the Fort Wayne-South Bend diocesan family: “I’ll never forget, one day I was on my hands and knees cleaning toilet bowls, and Solanus walked into the bathroom and he said, ‘Oh, are you ever a lucky young man to be able to clean toilets for your brothers.’ That left a great impression on me.”