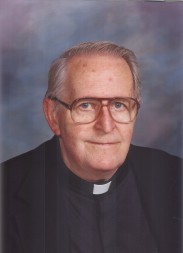 FORT WAYNE — Father Robert A. Yast, retired priest of the Diocese of Fort Wayne-South Bend, who served at several parishes, died Oct. 30. He was 85.

Robert Anthony Yast was born the fifth of Charles and Elizabeth Yast’s five children in LaPorte on Aug. 10, 1926. He attended St. Joseph Elementary School in LaPorte and graduated from LaPorte High School in 1944. Interested in music studies, Father Yast attended Indiana University for two years before enrolling in St. Jerome College in Ontario. He then entered St. Mary of the West Seminary in Ohio where he studied for five years for the priesthood.

He was ordained into the priesthood on May, 26, 1956, by Bishop Leo A. Pursley at the Cathedral of the Immaculate Conception in Fort Wayne. His first priestly assignment was as assistant pastor at St. Peter Parish in Fort Wayne from 1956-68. Subsequently he served as assistant pastor at St. John the Baptist Parish in South Bend from 1968-72, as well as pastor of St. Anthony de Padua Parish, South Bend, from 1972-88, St. Patrick Parish in Walkerton, 1988-91, and St. Joseph Parish in Mishawaka, from 1991-2006.

Other service positions Father Yast held in his 55 years of priesthood include assistant director of Holy Family Center in Fort Wayne, Fort Wayne deanary moderator of the Confraternity of Christian Doctrine, chaplain of the South Bend Serra Club, diocesan consultor, and vicar forane for South Bend Vicariate B. He held memberships in the Fort Wayne Knights of Columbus and American Legion Post 148.

Father Yast retired in 2006 when he moved to Fort Wayne and in failing health eventually entered Saint Anne Home.

Msgr. Robert Schulte, vicar general of the Diocese of Fort Wayne-South Bend, recalls attending St. Peter Church as a boy during the time Father Yast served there as the assistant pastor. “He was friendly, outgoing and very well loved. He had a beautiful singing voice and was quite the artist. He had a great sense of humor. You were always very much at ease around him,” said Msgr. Schulte, adding that Father Yast was one of the priests who inspired him to his own priestly vocation.

Father Yast was a proponent of vocations and supported them in his own way. “I remember getting notes from him when I was in the seminary. I’ve heard from priests who were with him that he would get up early in the morning and writes those notes,” recalled Msgr. Schulte.

Father Terry Fisher, current pastor of St. Joseph Parish, Mishawaka, recalls that shortly after his appointment was announced to replace the retiring Father Yast, he saw two women from St. Joseph Parish who informed him: “We hate to tell you this, but you’re following a saint.”

“The people here loved him,” Father Fisher explained. “He had a great sense of humor, loved people and had a special and pastoral caring for the sick.”

Mary Geist, principal of St. Joseph Grade School from 1996 until her retirement last year, said that Father Yast was the kind of priest who made people feel comfortable in their religion and helped them see the Lord as a real person.

“He was not a man to hold a grudge, saw the best in people and was such a gentleman in more ways than one,” Geist said.

Al Gerstbauer knew Father Yast as a St. Joseph parishioner and also for the nearly 40 years that Father Yast was the longtime spiritual director of the local Serra Club.

“Of course we all dearly loved Father,” Gerstbauer said. “He was so even-going and had a knack for people liking him. As he got older, Father wasn’t able to do everything a younger priest could do, but nobody would object because he was such a dear, was so friendly.”

Violet Weitzman, Father Yast’s housekeeper for 34 years, said “Father Yast was a holy man: You never got in the car without saying the rosary, even if you were just going across town.

“I don’t think he had an enemy in the world, and he was very generous. He would give his shirt off his back to anybody who would come,” she said.

Sarah Ann Mueller, a longtime parishioner at St. Anthony de Padua, where Father Yast was pastor for 16 years, said her entire family benefited from his many talents: from his example as a pious priest, to his witty humor, to his beautiful tenor singing voice.

Bishop John M. D’Arcy, bishop emeritus, said of this faithful priest, “Father Yast was beloved wherever he served and was especially devoted to the sick and the dying. He would always be found in the hospitals and nursing homes, and was blessed with a delightful sense of humor. I found him a joy to be around. Father Yast will be remembered with that special affection and love that people reserve for parish priests who make present the Good Shepherd who laid down His life for the flock. May he rest in peace.”

Mass of Christian Burial for Father Yast was Thursday, Nov. 3, at 11 a.m. at St. Joseph Church in Mishawaka. Burial was at the Yast family plot at Oaklawn Cemetery in Sturgis, Mich., on Nov. 3.