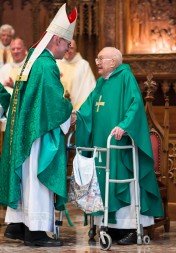 FORT WAYNE — One hundred years of life and 74 years of priestly service of Father Robert Traub were celebrated in a Mass of thanksgiving at the Cathedral of the Immaculate Conception on the honoree’s 100th birthday, Aug. 23.

Thirty one priests and a large crowd of friends and well wishers took inspiration from a brief history lesson by Bishop Kevin C. Rhoades as he reminded those present that when Father Traub was baptized at St. Lawrence Church in Muncie, St. Pius X was pope, Bishop Herman J. Alerding was bishop in the Diocese of Fort Wayne-South Bend, and Woodrow Wilson was in the White House.

Holy Cross Father Tom Jones, a priest from South Bend, recalled how inspired he was, as a young priest, by the energy of Father Traub and his dedication to the care of sick parishioners and their pastoral needs.

Deacon Jim Fitzpatrick continues to be impressed by Father Traub’s consistent cheerfulness and supportive attitude towards other residents at Saint Anne Home and Retirement Center where Father Traub now lives.

Father Traub as a boy was confirmed, and years later, ordained to the Priesthood by Bishop John F. Noll, and on the following day, said his first Mass at St. Lawrence.

Present at that Mass as a server, and present for the Mass of thanksgiving was Bill Perkins who quoted from Father Traub’s homily: “What needs to be said today, can be said in five minutes, and I won’t speak longer than that.”  — another characteristic that has lasted for 74 years.