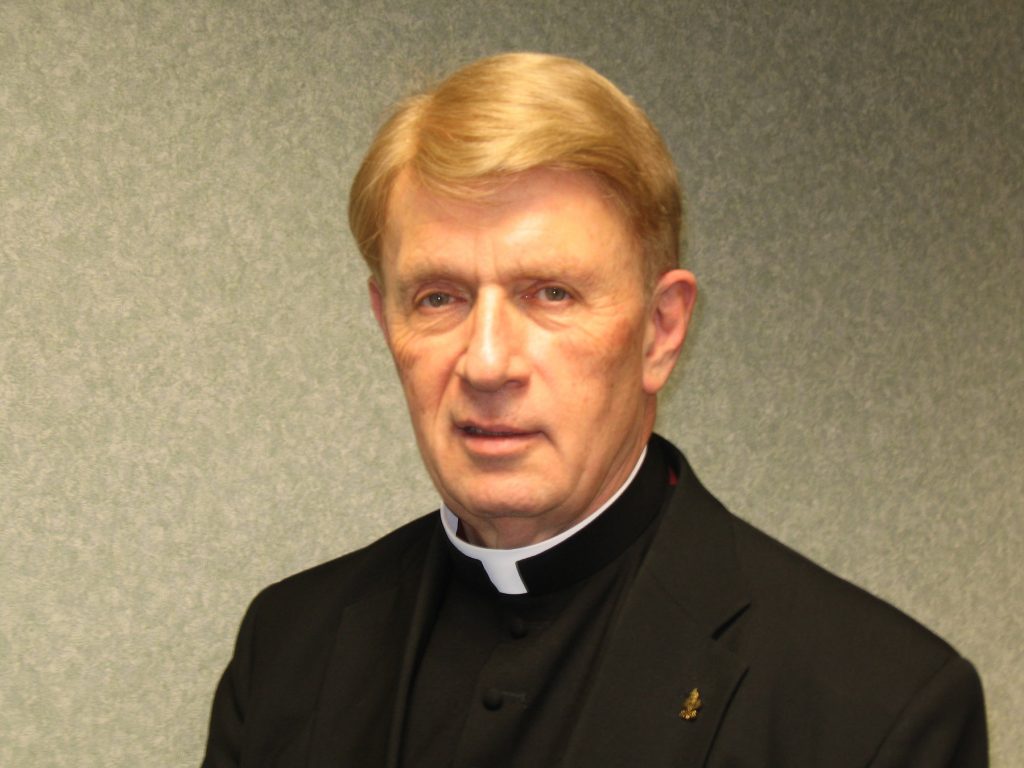 The Diocese of Fort Wayne-South Bend has bid farewell to one of its beloved priests. Father Phillip Widmann passed from this life on March 16.

Father Widmann served as a diocesan priest for over 40 years, since his ordination by Bishop William McManus Jan. 15, 1977. An avid scholar of history, he was the driving force behind establishing Diocesan Museum and was instrumental in helping bring about a written history of the diocese, “Worthy of the Gospel of Christ,” by Joseph M. White, published in 2007.

According to that work, Father Widmann was inspired to begin collecting artifacts for a museum by Msgr. Thomas Durkin, rector of the Cathedral of the Immaculate Conception from 1956 until his death in 1977. Pictures, priestly vestments, works of art and numerous other objects formed the collection for the earliest museum, which opened May 17, 1981, in a classroom of the old Cathedral School. The museum is now permanently located in the former chancery building beside the cathedral.

Born in 1941, Father Widmann grew up at St. Peter Parish in Fort Wayne and attended Central Catholic High School, graduating in 1959. Prior to becoming a priest, he was deeply involved in diocesan young adult programs, including Catholic Youth Organization and Catholic Young Adults. He himself said that his vocation came late in life, when he joined the seminary at the age of 30. He graduated from Mount St. Mary’s Seminary in Emmitsburg, Maryland, in December 1976 with a master’s degree in systematic/dogmatic theology.

Throughout his years as a priest, Father Widmann served at various parishes in the diocese, including Holy Family in South Bend; St. Mary of the Assumption, Avilla; St. Joseph, Roanoke; and St. Catherine of Alexandria, Nix Settlement, as well as several parishes within Fort Wayne, including his home parish of St. Peter. His last assignment prior to retirement was St. Mary, Mother of God Parish in downtown Fort Wayne.

In addition to his parish assignments, Father Widmann also taught moral theology at Bishop Dwenger High School, Fort Wayne, and served as chaplain for its football team and on numerous charitable committees.

History and antiques – particularly those pertaining to the Catholic Church – were his great love. Father Widmann could often be found at the museum he built and whose collection he continued to expand.

Kathy Imler first became acquainted with Father Widmann during his 17 years as pastor at St. Peter. She volunteers as a docent at the museum and spoke of his dedication to preserving and displaying artifacts of the past. She stated that he was in the museum “all the time. He would be here at five in the morning, tacking up vestments or working on displays.”

In addition to his love of history, she said Father Widmann had a great talent for setting up displays of religious artifacts — a much different talent than typical decorating. Imler indicated that he was a man who knew what he wanted and was driven to get things done. He also had a fantastic memory for minute details about each artifact and knew how to separate them by category, she said.

Imler stated, “If there was anything historical, he would have looked it up; he would have tracked it down. He was insatiable when it comes to getting all that information.”

All of the informational cards in the museum were composed by Father Widmann, and he had a list of people he could call on for the specialized handiwork. He was constantly collecting relics to add to the collections and had recently begun work on two new rooms in the museum. His devotion to Mary will continue to shine through in one of these, which is dedicated to Marian art and artifacts. He frequently said he was grateful to Bishop Kevin C. Rhoades for his support of the museum and for the volunteers who made its continuation possible.

In a letter to the bishop regarding expanding the museum, Father Widmann wrote: “It has been an extra special joy for me because of my love for Holy Mother Church and the saving of her patrimony, but also because of my love of history and antiques. Over the past 43 years, this museum has been the ‘catalyst’ for many to either take a deeper look at Catholicism and convert, or for others to return to the practice of their faith. The number of people who have become Catholic or have returned to the practice of their faith simply because they saw something on display or something gave them good, positive thoughts about the faith or a new or renewed interest in the faith, gave them the necessary push to come home.”

Father Widmann’s funeral Mass, which took place March 11 at St. Peter, was celebrated by Bishop Rhoades. Archbishop William E. Lori of the Diocese of Baltimore, Maryland, a friend and classmate of Father Widmann’s from the seminary, gave the homily. He spoke of the priest as a friend, sharing personal stories of their time together in the seminary and in the many years thereafter.

Archbishop Lori described their long friendship thus: “Through the years, through thick and thin, we remained friends. We visited one another in the summers, though in hindsight, not nearly often enough. When we spoke on the phone, it was as though the years melted away.”

Of Father Widmann’s priesthood, Archbishop Lori said, “An index of Father Phil’s priestly goodness was his resolve to serve as long as he could.” Even as his health began to decline, “Father Phil kept going, doing all that he could until his physical condition left him no other choice but to retire. Here, I think, he demonstrated a true spousal love for the Church and for his people, loving them ‘for better or for worse, in good times and in bad, in sickness and in health.’

“Father Phil lived in this passing world with his heart set on the world that is to come. Father Phil expressed this longing for God in his daily prayer, especially the Divine Office, the recitation of the rosary and his devotion to the Eucharist. His prayers, clearly, were not formalistic but rather from the heart. He was not only the Lord’s good priest; he was also the Lord’s good disciple.”

“It was such an honor and a privilege to work with him,” Imler said. She reflected on his sense of humor and dedication, and was humbled by the opportunity to cantor at his funeral Mass. “He had a mission and a purpose that you wanted to be a part of.”

Father Widmann was laid to rest at Catholic Cemetery, but his influence on the Diocese of Fort Wayne-South Bend will live on through the work he has done at Diocesan Museum and for the betterment of the diocesan faith community.