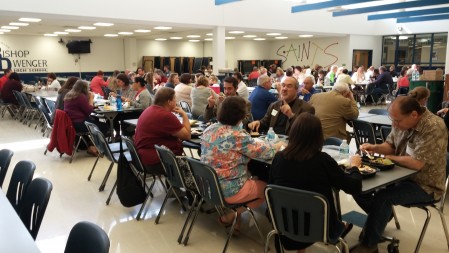 DETROIT — “I don’t consider myself disabled,” says Father Michael Depcik, a deaf priest who works for the Archdiocese of Detroit and is responsible for ministry to the deaf in the city of Detroit and beyond.

“Deaf people can do everything except hear,” he adds. “I live a normal life.”

Father Mike grew up in Chicago in a deaf family of seven where he attended his mother’s alma mater, St. Rita School for the Deaf. He excelled academically and was involved in many extracurricular activities — student government, drama, yearbook — and served as class president.

After high school graduation he attended Gallaudet University in Washington, D.C., the only college for the deaf in the country. With a strong desire to help other people, he attained a bachelor’s degree in secondary education and history, fully intending to go into teaching or social work. Instead, with encouragement from a college chaplain, he discerned a calling to the Priesthood and entered seminary studies instead.

He was ordained on June 24, 2000, and joined the Oblates of St. Francis de Sales in Detroit to become one of only 10 deaf priests worldwide.

Father Depcik says, “To join religious life means I had to give up my deaf world.” 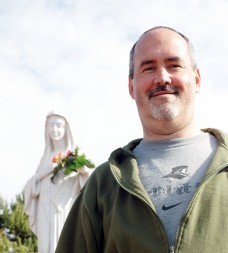 Father Mike Depcik, one of 10 deaf priests worldwide, often visits the Diocese of Fort Wayne-South Bend where he celebrates Mass and offers Confession for the deaf several times a year in Fort Wayne. He is shown on one of his visits to the diocese.

He had grown up in a deaf family, attended deaf schools and socialized almost exclusively with other deaf people. That had provided a sense of security and community that he gave up in order to join the Priesthood. He lives in an Oblate house in Detroit whose members are all hearing, though some have learned sign language in order to better communicate with him. But it is not the same as living with other deaf people who understand each other and are part of the deaf culture, he says.

Father Depcik stays busy in the area of Deaf Ministry and celebrates Mass in American Sign Language at St. John’s Deaf Center in Detroit, where 120 or so gather in worship each Sunday.

According to The Michigan Catholic, the center was founded in 1974 as an outreach ministry of the Archdiocese of Detroit and is funded by the Catholic Services Appeal, an annual campaign similar to the Bishop’s Appeal locally. Since many of its worshippers travel quite a distance, they arrive early or stay late for a variety of programs offered only on Sunday, including parish council meetings, religious education, Confession and spiritual direction, socializing and fellowship. Not all worshippers are deaf themselves. Some are hearing parents of deaf children, some are hearing children of deaf parents and many are otherwise related to or work with the hearing-impaired. “Without St. John’s, parishes would struggle to minister to deaf people,” he says. “We are blessed here at this church.”

Father Depcik also travels and works outside his archdiocese and, in fact, celebrates Mass and offers Confession for the deaf several times a year here in Fort Wayne.

“Father Mike Depcik’s help to the Diocese of Fort Wayne-South Bend is immeasurable,” says Mary Glowaski, Secretariat for Evangelization. “He has helped us to better understand and serve the deaf community and culture and we are grateful for the ways that he has empowered our diocese to better serve others.”

He explains that deafness is different because the deaf have their own culture and cannot communicate with the hearing community. The Catholic Church is challenged to minister to the deaf community because “we can’t speak their language,” and he believes the Church should encourage more priests to learn sign language instead. He says that his hope for the Church is twofold, that those in leadership positions listen to the needs of the deaf and welcome them, and that they “realize we can help the Church.”

In an interview with The Catholic Review, Father Depcik explained that American Sign Language has a different grammar and structure than that of English. In interpreting it, much can get lost in translation so that those in the deaf community without access to a priest who signs are like “sheep without a shepherd.” Many deaf Catholics attend other churches because they have no access to what the church has to offer,” he adds.

Father Michael Depcik has dedicated his life to this ministry and so must play an active role in both the deaf and the hearing worlds. He confides that he finds the strength to do so from two sources. First and foremost, he says, is his daily prayer life and reliance on God’s plan for his work. Second is the “wonderful support system” of good friends who encourage and help him in his mission.

His advice to those to whom he ministers is to “find joy and be grateful” for the blessings they encounter in their lives.

Masses for the deaf and hard-of-hearing community

In Fort Wayne, the Cathedral of the Immaculate Conception, 1122 S. Clinton St., provides an American sign-language interpreter for the
deaf and hard-of-hearing at the 11:30 a.m. Mass on the second Sunday of the month.

In Mishawaka, St. Monica Church, 222 W. Mishawaka Ave., has an American sign-language interpreter for the
deaf and hard-of-hearing at the 10 a.m. Mass on the second and fourth Sundays of the month.