Ironman Triathlons are grueling races. They begin with a 2.4-mile swim, followed without break by a 112-mile bike ride. As if that was not enough, as soon as the competitors dismount their bikes, they embark on a full marathon of 26.22 miles.

These seemingly insurmountable feats of strength and endurance require an iron will, as well as consistent, dedicated training. Among the committed athletes who entered such competitions this year was Father Matthew Coonan, pastor of St. Vincent de Paul Parish in Elkhart, who competed in September.

No stranger to running, Father Coonan competed in high school cross country and track, then ran for a couple years following graduation. After not having run consistently for seven years, his brother and some fellow seminarians invited him to run a marathon in 2009. “Since then,” he said, “I’ve been running more or less consistently.”

The idea to run an Ironman came to him shortly after he resumed running. “At that point, I had been casually cycling for a couple years with Msgr. (William) Schooler and other friends and had done several 100-mile rides.”

While he may cycle great distances, “I’m a runner much more than a triathlete,” he said. Setting a half-marathon goal time for himself late last year, he began training to achieve that goal time in December.

Father Coonan competed in the Kalamazoo Half Marathon May 7, completing another step in his journey to the Ironman. 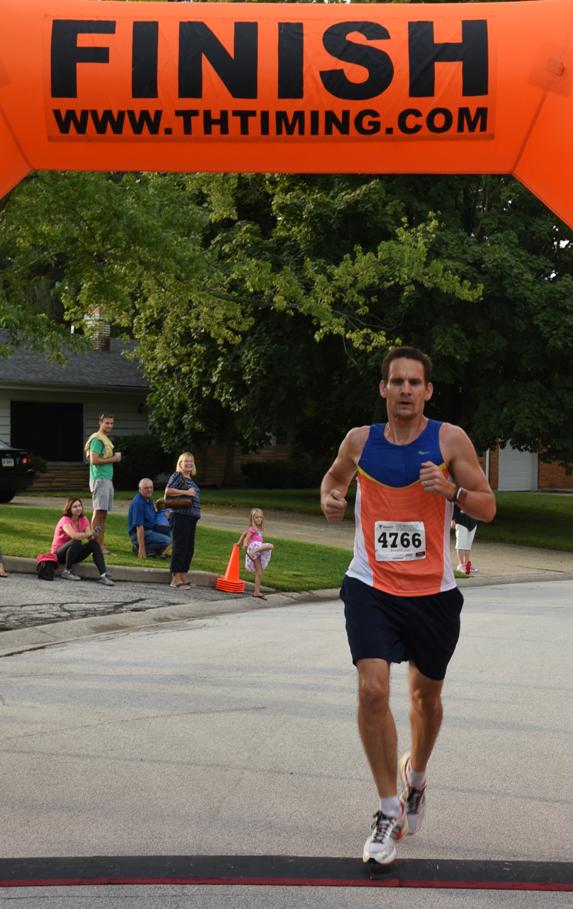 Father Coonan took care to ensure that his consistent training did not interfere with his duties as a priest. “Maintaining the duties of my vocation as a priest is my highest goal. I am a Catholic priest who happens to run.” He stressed that while his athletic goals are exciting, they are not the source of his ultimate joy.

He admits that when he misses a goal time, he simply shrugs his shoulders. “Serving Jesus Christ, fulfilling the Father’s will for my life, bringing pleasure to His heart by glorifying Him — that’s what truly gives me joy, hands down.”

There have been days when he has missed workouts to fulfill his responsibilities to St. Vincent Parish. Father Coonan calls these days “gifts from God,” because they mean that there is “meaningful and fulfilling service to be done” at the parish. He compares this experience to that of a biological father who misses a workout, because “it means that he has a family to live for, to love, and something meaningful to do with them.”

Sept. 8 was the day for which Father Coonan had been training all summer. He traveled to Madison, Wisconsin, where one of the eight annual Ironman competitions take place. He arrived with two goals: finish under 11 1/2 hours, and “keep moving, don’t bonk.” “Bonking” is runner’s slang for a sudden feeling of fatigue that may cause a runner to walk.

Father Coonan made his way to the start, prepared to race. First came the swim: Focusing on each upcoming buoy, he finished that leg with a time of 01:24:24. During the ensuing bike ride, he recounted that he “prayed some rosaries, spoke with other athletes, thanked lots of people for coming out to support us, and made them laugh.”

As he entered the sixth mile of the run, he realized that he likely would not achieve his goal time. Instead, he focused on his second goal, “don’t bonk.” Although he finished off his mark by 35 minutes, he succeeded in his second goal” and finished the Ironman with an impressive overall rank of 366.

“Exercise has been valuable for me to lead a balanced and healthy life,” Father Coonan said. While for him this means endurance training and running relatively long races, he pointed out that exercise can be as simple as a 30-minute rosary walk. He also said that while many people may have goals that revolve around running or other athletics, “the highest and most fulfilling goal is to live in accord with who God has called you to be.” Athletic goals come and go, but the heavenly goal is everlasting: And it’s the highest goal for a Catholic priest who just happens to run.