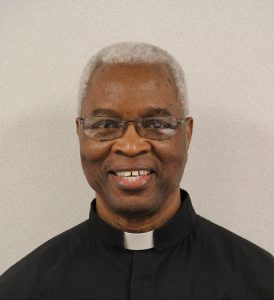 One of his greatest joys as a priest has been the opportunity to bring smiles to the faces of his parishioners through his sense of humor. But after serving as a missionary priest in the Diocese of Fort Wayne-South Bend for over 18 years, Father Lawrence Teteh, C.S.Sp., will return to his home country of Nigeria this summer, having reached this diocese’s retirement age of 75.

“Being a priest is a very high and noble calling and should be lived accordingly, knowing that the priest represents Christ for people,” Father Teteh said.

He has lived that calling to members of St. Therese Parish in Fort Wayne, where he has been pastor for the last nine years. Very active in parish activities, he has attended the annual parish festival and even played the harmonica and celebrated “Mass on the Grass” for attendees. Father Teteh also has often been seen greeting parishioners with his ever-present smile and interacting with the children at school.

His first assignment upon arriving in Indiana was at Our Lady of Hungary Parish, South Bend, from 2001-11, where he served as parochial vicar and later as administrator and pastor. Prior to coming the diocese, Father Teteh worked in different capacities in Nigeria, including as a teacher and principal, chaplain in campus ministry and lecturing in a college setting.

He shared that he had been a priest for 30 years before coming to the Fort Wayne-South Bend area.

“I came over to the diocese on a sabbatical leave, but wished to work purely in the pastoral area, having been recommended by a priest and then invited by Bishop John M. D’Arcy,” he recounted. Though Father Teteh admits that each parish he has been in has had its own challenges, he is proud to have been able to manage the two faith communities, both of which have grade schools attached to the parish.

Father Teteh is a religious priest in the Congregation of the Holy Spirit, otherwise known as the Spiritans or Holy Ghost fathers. The Spiritans were founded in France by Claude Poullart des Places and became missionaries in many French-controlled colonies throughout the world, particularly in countries in Africa.

Father Teteh’s vocation to the order came in 1958. When he was finishing primary school, the director of the Holy Ghost Juniorate came to speak to the boys in his class about the mission and work of the Spiritans. “He came with a very young aspirant seminarian. I decided there and then to join them. I was 14, then.”

One of 11 children, Father Teteh is from the southeast region of Nigeria, an area that is predominantly Christian and boasts many religious vocations. “My father was a schoolteacher and catechist. This influenced me a lot to choose to be a priest and a missionary.”

Education has been a large part of his life. Aside from working in a school setting he spent many years on his own education, earning two bachelor’s degrees — one in theology, one in philosophy — as well as a master’s and doctorate in educational fields. “Most of my life has been spent either in the classrooms as a student or as a teacher before I settled to complete pastoral ministry,” he summarized.

One of the more challenging aspects of serving in the Diocese of Fort Wayne-South Bend for Father Teteh has been adjusting to a vastly different culture. And of course, he has had to adjust to the colder weather of Northern Indiana. Many a parishioner will chuckle in remembrance of his jokes about returning to 40-degree weather after enjoying a long vacation in the 80- and 90-degree temperatures of Nigeria. There will also be fond memories of the fur-lined hat he often wore during winter days.

Parishioners at St. Therese showed their appreciation for Father Teteh by undertaking a renovation of his house in the winter of 2018-19. Funded by money raised by parishioners and school families, the work was completed entirely by volunteers. The remodel took six weeks and included the kitchen, bathroom and living spaces, in order to make Father Teteh’s home more comfortable in addition to completing necessary repairs.

Last fall, Father Teteh led a group of pilgrims from St. Therese to the Holy Land, saying Mass every day and teaching the group about each site they visited. He also ensured that those who were unable to travel overseas were still able to take part through a “virtual pilgrimage” in which photos and information about the sites visited were posted to the St. Therese Facebook page.

When asked what he will miss most about the Diocese of Fort Wayne-South Bend, he replied, “I certainly will miss, but very fondly recall, the warmth of both the parishioners and school kids in both parishes.”