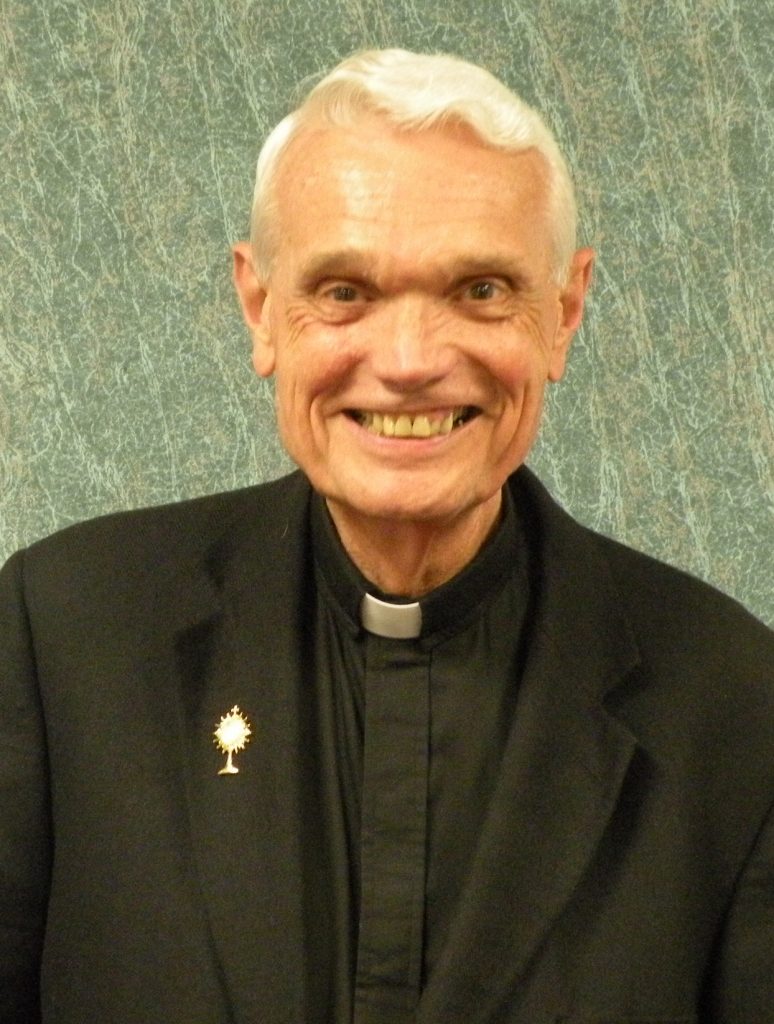 After more than 50 years of priesthood in the Diocese of Fort Wayne-South Bend, Father John F. Pfister passed away Monday, Dec. 13, at St. Anne Home in Fort Wayne. Father Pfister had retired from active ministry in 2015. He was 82 years old.

Father Pfister was born Oct. 17, 1939, to Francis and Florence (Schelmhammer) Pfister. He attended SS. Peter and Paul School in Huntington, followed by seminary training at Our Lady of the Lake pre-seminary and Theological College in Washington, D.C. Ordained to the priesthood in 1966 by Bishop Leo A. Pursley, Father Pfister taught English and religion to the first classes at Bishop Dwenger High School while assisting at St. Charles Borromeo Parish. After this, he became pastor of St. Jude Parish, Fort Wayne, before moving to South Bend to shepherd the now-closed St. Mary of the Assumption Parish. Returning to the Fort Wayne area years later, he pastored Queen of Angels Parish for a decade before being appointed pastor at St. Mary Parish in Huntington.

Under his leadership at St. Jude and through the dedicated work of parishioner Ed Dahm, the old convent chapel at the parish was converted into a perpetual adoration chapel, where the Blessed Sacrament has awaited thousands of worshippers for over 35 years.

He served in many other capacities as well, being appointed vocations director for the diocese in 1969, a position he held for 11 years. As a longtime member of the Knights of Columbus, he served as chaplain for councils for 35 years and as state chaplain for 2 years.

His care and concern for the future of the Church was evident in his service both on the board of trustees for the Athenaeum of Ohio, which comprises several minor and major seminaries, and as chaplain for the Serra Club of Fort Wayne. Even his final wish reflected this, as he requested donations be sent to the Seminarian Education Fund in lieu of flowers.

Throughout his ministry, Father Pfister was known for his warm manner and his frequently used exclamation – “Garsh!” Joyce Rehtlake, member of St. Mary in Huntington, remembered Father Pfister from various ministries within the church. She described him as “a very giving person; always concerned with his obligation to his ministry.”

Msgr. Robert Schulte was in the seminary when Father Pfister was vocations director. He recalled how Father Pfister visited the seminary and arranged summer gatherings for the future priests. Working together, the two of them instituted a program in the early 1970s in which seminarians are assigned to a parish during the summer break, modeled after the one in the Archdiocese of Indianapolis. This practice has now been in place for over 40 years thanks to Father Pfister, giving seminarians a taste of parish life before ordination.

“He was very influential, a good model of priesthood,” Msgr. Schulte said.

The connections between the two men continued through the years, as Msgr. Schulte took over the duties of vocations director from Father Pfister and is now pastor at St. Jude. Located just across the street from St. Anne Home, Msgr. Schulte was able to visit Father Pfister in his last years. Msgr. Schulte remarked that: “He suffered a lot, but always wanted to do what the Lord wanted, to do God’s will, even in his illness.”

The funeral Mass for Father Pfister will be celebrated Friday, Dec. 17, at 11 a.m. at St. Mary in Huntington, with burial at Mount Calvary Cemetery to follow.