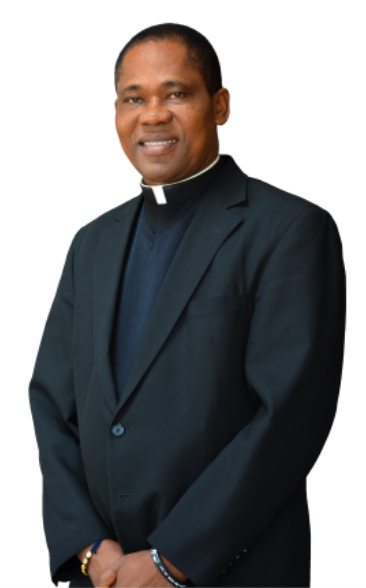 Queen of Peace Pastor Father John Eze has one defining statement: “It is all by grace and mercy.” That statement is on a sign on the wall in his office.

Father Eze grew up in the eastern part of Nigeria “in a very strong Catholic home.” His family prayed together and attended daily Mass. “There was so much love and compassion,” he said of his family home. His father was a catechist helping with missions, putting up schools and churches. Father Eze used to tell people: “Dad was the justice of God and mom was the mercy of God, but I realized both together was synergy — offering both God’s mercy and justice.”

He believes that it is only because of God’s grace and mercy that he is where he is today.

Father Eze was attracted to the priesthood from a very young age. His godfather was a priest, which had a big influence on him. When he attended Mass at around six years old, he was so overcome with the feeling that he should be at the altar with the priest that he started running forward before his father caught him.

“My ardor was so strong, I was looking forward to a time when I could break away and run faster,” he recalled.

The priest saw the commotion he made during Mass and allowed him to come forward.

So he sat on the steps at the altar, and before long his siblings started calling him “Father John.”

When it was time to go to high school, his diocese announced the opening of a minor seminary. For Father Eze, it “was no difficult decision for me” to choose to attend.  His parents, however, did not have the resources to send him.

He was so determined to go that he ran away at age 12, jumping in the back of a truck headed to the minor seminary four hours away. When he was discovered and said he wanted to be a priest, a priest brought him into the school. All he had with him was a pair of trousers and a shirt and had to borrow other items from classmates. After two weeks, the rector called him into his office where he told his story.

The rector replied that if God called him, he would find a way back. Unfortunately, he could not remain in the seminary. Back home his parish priest — a Canadian missionary — took over his seminary formation and said donations to the missions paid for his education.

The priest told him if he became a priest, “it would be a gift to the Church, but if I don’t, I’d have to pay it back so someone else could be taken care of.”

He was ordained a deacon in 1996 and a priest in 1997. He worked as an assistant to that same priest for three years. “It was a wonderful experience,” he said.

When he went to Rome with that same priest, it was his “first experience traveling outside my country.”

Fifteen years of his priesthood were spent in his home country before coming to the United States in 2011 on a visit arranged by a childhood friend from Nigeria. Father Eze always had a desire to visit the U.S., so his friend asked Father Glenn Kohrman, who was at St. Vincent de Paul, Elkhart at the time if he could come for a visit.

At the end of the trip, Father Kohrman asked if Father Eze could come back the next year while he was on sabbatical. Though it would be challenging financially, Father Eze was open to the idea and Father Kohrman assured him that the diocese would help him finance it and acquire a work visa.

“That was too good to say no to,” he said, and obtained his bishop’s permission to return.

Sabbaticals in Nigeria and the U.S. differed in length, though, a fact that he was not aware of at the time. When Father Kohrman returned, Father Eze asked if he could petition Bishop Kevin C. Rhoades for another assignment.

The timing could not have been better, as Father Dan Scheidt, then-pastor of Queen of Peace, Mishawaka, needed surgery, so Bishop Rhoades sent him there.

“I found great joy in coming to this family,” Father Eze said.

He was allowed to stay and was installed as Pastor of Queen of Peace in July of 2013. A few years after being installed as pastor, he came down with a life-threatening illness, ending up in a coma for three weeks and in the hospital for three months. Doctors even talked about taking him off life support, but his sister adamantly refused, and he recovered to continue his priestly ministry.

The most rewarding part of which, he said, is Eucharistic Adoration. In his younger years, he thought: “‘If God gives me the grace to be a priest I’ll make the Eucharist — especially Eucharistic adoration — the heartbeat of my ministry.’”

He has always had a “great love for clinical psychology” and in 2020 he asked the bishop if he could pursue a master’s degree in mental health counseling, which he is studying at Indiana University South Bend.

Father Eze had this advice for those discerning a vocation: “It’s God who calls and once God calls you, He gives grace. Do not rely on yourself; trust He’ll carry you through everything. Come the way you are; give yourself to God. No man or woman is a finished project — we’re all a work in progress.”

He will celebrate the 25th anniversary of his ordination on July 5, and for him, “It feels like yesterday — I must be having fun because time has flown!”