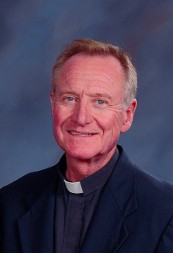 The Diocese of Fort Wayne-South Bend is mourning the loss of Father Richard Hire, 72, who died Thursday, May 4, at his residence on Lake Wawasee, Syracuse.

In his 47 years as a priest in the Diocese of Fort-Wayne South Bend, Father Hire served at many parishes as well as in the position of diocesan director of religious education. Most recently he was pastor at St. Martin de Porres Church, Syracuse, from which he retired last year.

Father Hire was born July 1, 1944, to Richard J. and Lucille A. Ueber in Fort Wayne. He attended St. Peter and Sacred Heart parishes in Fort Wayne.

After attending Our Lady of the Lake Seminary in Syracuse and Mount St. Mary’s in Norwood, Ohio, Father Hire was ordained to the priesthood on May 30, 1970, by Bishop Leo A. Pursley. He was appointed to St. Charles Borromeo Parish, Fort Wayne.

Father Bill Sullivan, pastor of St. John the Baptist parish, New Haven, had a friendship with Father Hire that went back to their seminary days at Mount St. Mary’s: Later, the two shared quarters at St. Joseph Parish in Fort Wayne. At the time, Father Sullivan was pastor and Father Hire was diocesan director of religious education and helped at St. Joseph on weekends.

“He was brilliant,” said Father Sullivan. “Even in grade school, he was a bright student: spelling bee champion in the seventh and eighth grades at Sacred Heart. In the seminary, as he worked on his masters in theology he also pursued, by correspondence, a master’s in English from Purdue.”

Writing was one of Father Hire’s many gifts. Readers of Today’s Catholic may fondly recall Father Hire’s column, That’s A Good Question, in which he answered readers’ inquiries about religion. His answers had a particular flavor because he was a seasoned world traveler and church historian, and in many cases, he had followed the footsteps of, for example, the apostles and Martin Luther.

Liz List, St. Martin de Porres parish secretary and bookkeeper, fondly remembered: “Father Hire was a very personable man. He loved his history and all his travels, and was very proud to share that with anyone any chance he had. Over nine years of working with Father Hire, and especially the last few years when his health was challenging him, he showed me the grace of God through his words and actions — right up to the day he celebrated his last Mass at St. Martin.”

Eric Sundberg, former music director at St. John the Baptist, New Haven, remembered Father Hire as gifted and well-rounded in the arts, travel and history — and profoundly spiritual. “He had a unique way of dramatizing homilies, particularly for the kids’ Masses,” he said. It was improvised all the way. Father would call up several boys and girls, give them costumes, casting them on the spot as Jesus, Mary and Joseph.  While Sundberg vamped background music on the piano, Father Hire whispered lines to the actors, which they repeated into a microphone. The scenes could be everywhere from heaven to the Holy Land: Everyone seemed to love it.

Father Andrew Nazareth, pastor at St. Martin de Porres, Syracuse, shared: “Father Richard Hire was a great example as a pastor of this parish for me, especially when his health started to deteriorate. He showed pastoral zeal in respecting and honoring the calling that he had as pastor for the care of his people. On behalf of the faith community of St. Martin de Porres, I thank him and his family immensely and ask the good Lord to give him eternal rest.”

Father Hire was laid to rest on Tuesday, May 9.

A Mass of Christian Burial for Father Hire was officiated by Bishop Kevin C. Rhoades at St. Peter Catholic Church, Fort Wayne. He is buried in Catholic Cemetery.