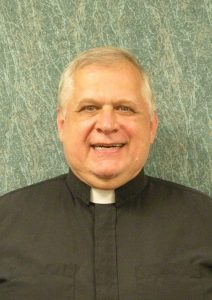 When asking a priest about his mountaintop experiences in ministry, it should come as no surprise that it might be on Mount Tabor. That’s one of the spots Father Gary Sigler names when thinking over his more than 40 years as a priest.

Father Sigler, who is scheduled to retire from parish ministry on June 23, didn’t have to think long to answer that a trip to the Holy Land was one of the highlights of his life as a priest.

“Yes, right there at the site of the transfiguration of Jesus,” he said. Father Sigler was one of two priests on the pilgrimage several years ago, and it was his turn to preside at the Mass. “I stood there thinking about the words of God, and I just sort of belted out ‘this is my beloved Son.’”

While travel has always appealed to the affable pastor of St. Paul of the Cross Parish in Columbia City, he didn’t have to travel halfway around the world to find joy in his priesthood.

When he arrived at his new parish in 2012, he was tasked with building a proposed $1.1 million parish community center. “I waited a year and listened to people, and indeed they wanted that center,” he recalled. The price, however, was a bit steep, so he told the architect that if they could build it for $975,000, the plan could proceed.

After 10 years of fundraising under former pastor Father Larry Kramer, groundbreaking for the center took place on the feast of St. Paul of the Cross, Oct. 20, 2013, and one year later, the parish dedicated its new building. “And what a blessing that has been,” Father Sigler said.

The center has served the parish in many other ways. Father Sigler named monthly Knights of Columbus pancake breakfasts held in conjunction with Red Cross blood drives, the annual parish St. Patrick’s Day party, as well as basketball and volleyball leagues, and voting in local and national elections. “It really brings in the community.”

Father Sigler’s call to the priesthood came early in life. “I decided I wanted to be a priest in fifth grade.” By seventh grade he had joined the Capuchin’s St. Anthony’s Vocation Club, and left his parents and nine siblings in Canton, Ohio, to attend a summer retreat at St. Fidelis Seminary High School in Herman, Pennsylvania, about 40 miles north of Pittsburgh.

“I went back after eighth grade for another retreat, and by Sept. 1 of that year I was a freshman at the school.”

His four years under the direction of the Capuchin fathers and brothers steeped him in the Franciscan tradition and sealed his resolve to continue his preparation for the priesthood after graduation. “The atmosphere there was so warm and loving. We had a very close connection with the priests.”

Since the family lived in the Diocese of Youngstown, Father Sigler’s next step was St. Gregory Seminary in Cincinnati. After one semester, the young seminarian began to reconsider his preference for parish ministry.

The year was 1965, and the country was embroiled in the war in Southeast Asia. Father Sigler was summoned by the local draft board to take the physical prior to being drafted into military service. “Well, I failed,” he said. While a blood clot doctors discovered in his eye had never impaired him, the military decided he was not a good candidate for service.

Out of school and unemployed, Father Sigler enrolled at the Kent State University extension in Canton and began his studies for a bachelor’s degree in history. At the same time, he worked in a grocery store and in construction with his father.

For the first five years after leaving the seminary, Father Sigler was resolved that he probably wasn’t called to the priesthood. In addition to going to school and working, he, his mother and his younger sister spent some time in England visiting his mother’s family and touring the country.

It wasn’t until his classmates from St. Gregory were ordained that Father Sigler’s vocation to the priesthood was reawakened. “I went to a friend’s party, and his mother asked me when I was going back.”

Returning to the seminary in Cincinnati was a completely different experience than the first time. “The atmosphere was very different. In those seven years there had been changes in both the Church and the seminary.”

Since his degree from Kent State was in history and he had not met the philosophy requirement, Father Sigler said his first year in the seminary was dedicated to studying philosophy. The young man who had decided he was finished with school, admits this “was one of the happiest years of my life.”

At that point, he was ready to study for five more years to achieve the long-ago call. “If I had gone straight through, I would have been ordained at 25 and not had the experiences I did,” he said.

All of these experiences, he said, helped to prepare him for the challenges of parish ministry.

When asked what he would tell a young man discerning the priesthood, Father Sigler said with a chuckle, “If God wants you, God will get you.”

Being a priest, he said, “is the hardest and yet the most wonderful thing you’ve ever done.” Although he said he felt unprepared to be a pastor, he knows it was what he was meant to do.

“I thought I wanted to be a missionary when I was a freshman and sophomore, until I found out what it was like to be a missionary. I even thought about teaching at the seminary or going into hospital ministry.”

Retirement will mean new challenges but also a new freedom from the concerns of administering a parish. “I’m moving to Fort Wayne, and I’ll make myself available to help at parishes when priests are vacations or ill.”

He hopes to dive into his collection of cookbooks to rekindle his culinary skills. “I love to cook,” he shared.

Father Sigler also hopes to be able to visit his siblings who are scattered from Canton, Columbus and Cincinnati, Ohio, to Chattanooga, Tennessee, and Tampa, Florida.