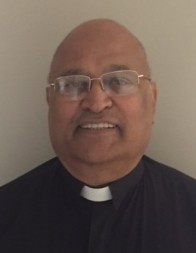 Ordained in 1970 in his home country of India, Father Derrick Sneyd recently retired from his administrative duties as a priest. He has served the Diocese of Fort Wayne-South Bend in some capacity for more than 40 years.

Father Sneyd studied to become a priest at Saint Charles Major Seminary in Nagpur, India. Immediately after his ordination, he served as secretary to Archbishop Emeritus Eugene D’Souza from 1970-72.

He was transferred to the United States to serve the Diocese of Fort Wayne-South Bend in a variety of roles. Some of those included associate pastor of Our Lady of Hungary Parish, South Bend; faculty member and chaplain at Marian High School, Mishawaka; pastor of St. Stanislaus Kostka, New Carlisle, St. Thomas the Apostle, Elkhart, St. John the Baptist, New Haven, and St. Monica, Mishawaka; and associate director of the diocesan Marriage Tribunal.

Father Sneyd said that his decision to enter the seminary was partly due to his Catholic education.

“My entire educational background through grade school, high school and the first university were all Catholic institutions where, for Catholics, classes, courses, in religion were a must,” he said. “The sisters, in the beginning years, and the priests, in high school and later, were themselves great examples of the Catholic way of life. I have very pleasant memories of these leaders.”

He discerned his calling through interactions with St. Mother Teresa of Calcutta, who was personal friends with his mother.

“It was my privilege to have been in her (Mother Teresa’s) care on many occasion(s) when my mother would go to Calcutta for shopping,” he explained. “She would leave me with Mother Teresa, do her work in the city and return in the evening to pick me up and head home by train.” She once told him, “Derrick, be a good priest.”

Though these specific occurrences played a role, he considers the Holy Spirit’s influence to be the overarching factor in his decision.

“After 46 years of celebrating ministerial priesthood, I confidently say that the decision to become a priest was a prompting of the Holy Spirit that gave me the impetus to discern the implications of saying yes to the divine will,” he reflected.

Father Sneyd had some advice to those currently discerning the priesthood.

“When life gets overwhelming, and believe me it does at times, get down on your knees and implore the grace of God to help you get through such times,” he said. “The perception of priesthood today is different than yesteryears; but the reality of being a priest today is the same as ever — (following) after the heart of the great high priest, Jesus.”

Father Sneyd said each community he served impacted his ministry.

“Now in my 46th year of priesthood, I can look back and praise God for bringing me into contact with wonderful folk whose genuine response to their individual vocations have been an encouragement for me,” he commented. “Each community of parishioners has taught me more about priesthood … of trust and kindness, forgiveness and love. For me, such occasions were indeed milestones in ministry. I am grateful.”

After an annual vacation to his home country of India this winter, Father Sneyd will begin his retirement in Charleston, S.C., where he will minister in ways that vary from his active administrative role as priest.

“One never retires from priesthood. It continues ‘til the final call of the Master,” he said. “It is my continuing intention to serve God’s people in sacramental and catechetical ministry.”

Of this continual service, he said, “This to me is priesthood at its best. The spiritual development of oneself and, thereby, the continuing development of the faithful, will constitute my priesthood in my retirement years.”