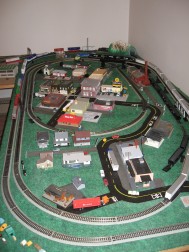 This realistic scene created by Father David Ruppert is enhanced by sounds of train whistles and track noises, taking viewers on imaginary trips anywhere, depending on the individual. Father Ruppert began his train collection in his seminary days. It continues to give him enjoyment, and his nieces and nephews are thrilled when they visit Uncle Dave and share the magic made by toy trains.

FORT WAYNE — It was the perfect gift for Junior. It might bruise the budget a little, but as dad explained to mom, “we can go light on his birthday … and don’t worry about the girls. We can give them clothes for the dolls they got last year. Let’s get it for him, honey. A boy can enjoy a Lionel train for years … and I can help him set it up!”

It made Dad feel so good that he told the guys at work about it, describing each car, including the caboose, in detail. “I’m starting him out with a freight and maybe a Pennsy passenger for his birthday. We can run them side by side.”

In the early 1900s, Joshua Lionel Cowen built the first electric train, not as a toy, but as a display prop to call attention to other merchandise in a New York toy shop window. Resembling a box on wheels, the first Lionel chugged around amidst other toys, bearing the words “Electric Express,” and became a hot item; one that dreams are made of.

Lionel electric trains reached their highest popularity in the late 1930s when advertised in the Sunday comics. A unique item was a handcar operated by Mickey and Minnie Mouse. In 1957, a pink and blue pastel model for girls derailed somewhere in the desert and was never seen again.

Airplanes, racing cars, various dolls and television reduced the interest in electric trains, but unlike planes or space capsules, trains have a mystique perpetuated by the whistle in the night or the wanderlust itch felt when watching passenger cars roll by.

Father David Ruppert, pastor of St. Therese Parish, Fort Wayne, is in rhythm with the clickity clack of train tracks. His mother tells him that as an infant, if he was fretful in the back seat of the family car, and if the car was waiting for a train to pass by, baby David settled right down.
Trains continue to soothe Father Ruppert, because he is at the throttle, so to speak, controlling two trains of his own. They roll side by side or back off to a siding near a neat village with paved streets and roads winding past a Pizza Hut, Burger King, a theater, homes, an apartment building and a church.

Some model train enthusiasts find enjoyment in building the tunnels, crafting miniature trees and creating different levels for their trains to travel on, thus creating a larger village or landscape, which eventually calls for more track and new cars.

For Father Ruppert, however, the challenge of hooking up the tiny hair like wires to the light bars of the police cars and fire trucks, school busses and railroad crossing signals to separate commands, gives him quiet satisfaction.

Trains have a fascinating aura that produces songs, poems and dreams of far away places, and model trains have their own magic. For Father Dave Ruppert, his trains provide enjoyment of the setup, and can also haul away stress cargo … a few moments of switching, backing and sending signals can clear his mind and place him back on track as a pastor of a large thriving parish.