St. Vincent de Paul Parish, Fort Wayne, was the scene recently of the Legatus organization’s celebration of its chaplain, Father Daniel Scheidt, and his recently received National Chaplain of the Year award. The chapter was recognized earlier in the year when it won a membership growth award at the Legatus National Summit in Naples, Florida; but local recognition of Father Scheidt’s distinction, with Bishop Kevin C. Rhoades in attendance, occurred at a Legatus dinner meeting Tuesday, July 18, at the parish’s Msgr. Kuzmich Life Center. 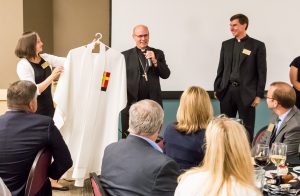 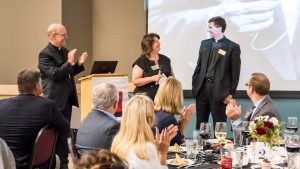 Legatus is an international organization of practicing Catholic laymen and laywomen, composed of CEOs, presidents and managing partners and their spouses, from the business community and professional enterprises. According to local president Diana Parent, the Fort Wayne chapter has 40 members from the surrounding area, who represent companies that boast at least $6-1/2 million dollars in annual sales and have 50 or more employees. These business leaders serve as ambassadors of Christ in the marketplace, she said, pointing out that 23,200 area employees are under Legatus members’ influence and guidance.
The Legatus prayer verbalizes its mission: “We continue to pray for Your gracious Spirit to work through us as we take Christ into the marketplace, that we would be faithful in proclaiming the Good News of Jesus and being His light to our world. We also humbly ask you to strengthen and grow Legatus so that we may faithfully carry out our mission to study, live and spread the Catholic faith in our business, professional and personal lives for Your glory.”

Father Scheidt, pastor at St. Vincent de Paul, serves as chaplain of Legatus, a position to which he was appointed by Bishop Rhoades in 2013 when the chapter was first chartered. The role of chaplain is that of spiritual leader and a person who, through his witness, calls the members to a deeper experience of and commitment to Christ and his church.
The priest was admittedly pleased at news of the award, but commented; “Receiving the honor of being National Chaplain of the Year for Legatus was as moving as it was surprising. … The honor is not so much mine as it is a tribute to our Fort Wayne chapter’s constant commitment to grow and deepen the networks of friendship that can unite the Catholic business leaders of our area. Our membership, like every gift of Christ, has multiplied.”

Bishop Rhoades offered several thoughts at the recognition ceremony. “I’m happy to see how Legatus has grown so quickly,” he said, attributing that growth in large part to its chaplain’s inspirational leadership. Though Father Scheidt is pastor of one of the largest parishes in the diocese, the bishop said he knew he could effectively serve in this ministry as well.

Addressing the audience, the bishop said the Legatus organization “needs a priest who leads you, who preaches God’s word; and Father Scheidt was the first priest I thought of” for the position. Then he blessed and presented to him a new chasuble and stole emblazoned with the Legatus symbol, a gift from the chapter.

Legatus Regional Director Nancy Haskell, who nominated Father Scheidt for the recognition, outlined a chaplain’s duties for the organization. These include offering Mass and confession for its members as well as providing ongoing spiritual guidance. Father Scheidt fulfills these duties and more, she said. “In addition to reverently providing the sacraments at every Legatus event, he delivers thoughtful homilies relevant to the Legatus mission and its members. These homilies and his closing remarks serve to tie the entire event experience together as he challenges the members to deepen their faith and their commitment to study, live and spread the faith. Father Dan’s deep care for the members is truly evident in his work as a Legatus chaplain, and his dedication to this role has enriched the lives and strengthened the faith of many.”

Nearly the entire chapter was on hand for the special celebration and presentation of the gift chasuble and stole. Membership chairman and former Legatus president Deacon Jim Fitzpatrick called Father Scheidt “a man of prayer who leads mostly by example, and has an ability to take everyday situations in life and make them relevant.” Businessman and St. Vincent parishioner Steve Grashoff said, “He really helps to lead us.”

Father Scheidt spoke to the whole of those in attendance during the evening, expressing his reciprocal affection for the Fort Wayne Legatus chapter.

“When I was in the seminary and considered Christ’s words in Matthew 19:29, that whoever leaves ‘houses or brothers or sisters or father or mother or wife or children or fields for my sake will receive a hundred times as much and will inherit eternal life,’ I never realized I could experience so fully in my life as a priest the ‘hundredfold’ of blessings the Lord promises. Being chaplain of Legatus is for me Christ’s gift of the ‘hundredfold,’” he said.