There are two of the goals organizers hope result from Father Gregory Boyle’s presentation on “The Power of Boundless Compassion,” which will take place at 1 p.m. Oct. 8 at the University of Saint Francis’ Robert Goldstine Performing Arts Center in downtown Fort Wayne.

One goal is discussions with social-service providers involving not just numbers of people served, but the amount of hope they instilled in their clients.

The other goal is nurses and other health-care workers re-energized by receiving as much as they give when they form a deeper relationship with their patients.

“The measure of our compassion lies not in our service to those on the margins but only in our willingness to see ourselves in kinship with them,” Father Boyle, SJ, the founder of Homeboy Industries gang intervention ministry in Los Angeles, said Sept. 13 on the Talks at Google platform, during a presentation titled, “The Whole Language: The Power of Extravagant Tenderness.”

Father Boyle’s appearance in Fort Wayne results from a collaboration between USF and the St. Joseph Community Health Foundation. Tickets are free but seating is limited. Order tickets at https://sjchf.org/boyle or call the foundation at 260-969-2001.

Father Boyle gained worldwide attention for his work helping gang members in Los Angeles leave gang life, rehabilitate themselves and build new lives in the community. The Homeboy Industries ministry he founded in 1988 provides wrap-around support and services for people leaving gangs, including addiction counseling and tattoo removal. Homeboy also helps people learn career skills through jobs with the ministry or in businesses it operates, such as Homeboy Bakery.

Father Boyle is the author of the best-selling books, “Tattoos on the Heart: The Power of Boundless Compassion,” and “Barking to the Choir: The Power of Radical Kinship.” 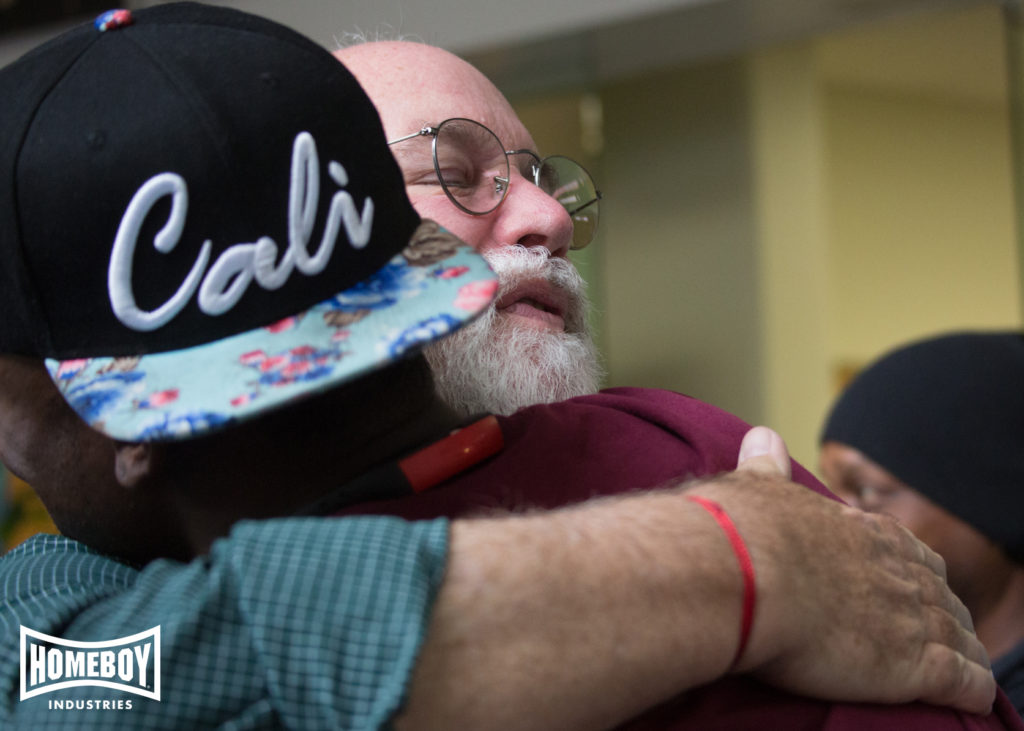 During his presentations, he uses humor and poignant stories to discuss the transformative power of forming deeper relationships with people living on the margins.

“We stand at the margins so that we can create a community of kinship such that God, in fact, might recognize it,” he added. “And, of course, we brace ourselves, because the world will accuse us of wasting our time.”

“Now, when you look at the past year and the pandemic, it seems the idea of caring for those around us sounds even more critical,” Distler said.

More people seem to be dealing with stress and violence in their lives, she said. That situation can be helped if people begin responding to others with more compassion and kindness.

Catholic social teaching encourages compassion and recognizes the human dignity of each individual, Distler said. True compassion, however, involves more than just passing out food to a hungry person. As Father Boyle emphasizes, it means engaging with a person, getting to know her or him, and forming a kinship relationship.

Distler said Father Boyle’s message and approach mirror the work of the Poor Handmaids of Jesus Christ, the order of women religious who created and sponsor the St. Joseph Community Health Foundation. The Poor Handmaids’ core values include being open to the Holy Spirit in responding to needs of the time, working in community with others, using and caring for resources wisely, and affirming the dignity of and respect for all people, it said on the foundation’s website.

Father Boyle inspires us to be our best and represents Catholic ministry on the front lines, Distler said. “If Christ came back now, this is exactly the type of ministry He would be doing,” she noted.

Going forward, the foundation will encourage the social service agencies it funds to serve people with more compassion and to get to know them more deeply, Distler said. She hopes discussions with grant applicants can be less about data and more about compassion and spiritual health.

“We want to make sure the conversation also includes, ‘How much hope are you inspiring?’”

The University of Saint Francis plans to have all its nursing students hear Father Boyle’s presentation, either in person in Fort Wayne or through a livestream at USF’s Crown Point and Lafayette campuses, said David Johnson, a professor of nursing at USF. Afterward, students will participate in reflective learning during discussion sessions about Father Boyle’s message, said Johnson, who serves on the St. Joseph Community Health Foundation board of directors and is its immediate past chairperson.

Many nurses and health care workers currently are experiencing compassion fatigue, in part from treating so many patients during the coronavirus pandemic, Johnson said. While constantly giving to take care of others, he explained, they may not take time to care for themselves.

However, if the interaction forms a kinship as Father Boyle suggests, that transforms the relationship into one in which the health-care worker also is receiving from the patient.

Along with health-care workers, he believes Father Boyle’s message will inspire anyone who works with people who live on the margins.