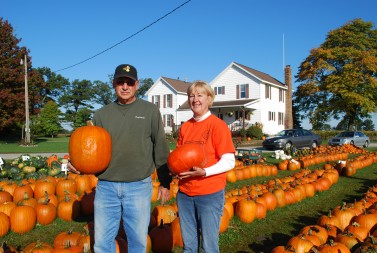 Ed and Linda Leininger, of Leininger Farms, stand in their pumpkin patch.

With Global Positioning Systems (GPS), agritourism, and hybrid corn and soybean seeds, the landscape of the traditional farm is changing. The constant in the farming community remains its strong sense of family and faith — two elements that are essential for the challenges found in agricultural vocations.

Two farming families on the west side of the Diocese of Fort Wayne-South Bend, Queen of Peace parishioners Ron and Barb Holderbaum, and St. Pius X parishioners Ed and Linda Leininger, share their challenges and how family and faith have impacted their lives.

The Holderbaums farm 500 acres of land in Wakarusa. They annually rotate soybeans and corn in their fields, with their eight children raising sheep, chickens, rabbits and pigs for 4-H. It is the collective work of each family member that keeps the farm going, Barb says.

“Teaching the kids what work is, and the responsibility and rewards in farming are important. My kids can’t come home and play video games in front of the TV for hours on end because they have chores to do.”

There are many misconceptions about the typical farmer in the 21st century, Barb notes. “I think that many people think of it as Green Acres where you have a couple of cows and some chickens and you live off of the farm. It’s really a business.”

She adds, “There is a huge investment involved. Planting the seeds is really a small part of it, especially when you look at the record keeping and the financial aspect.” 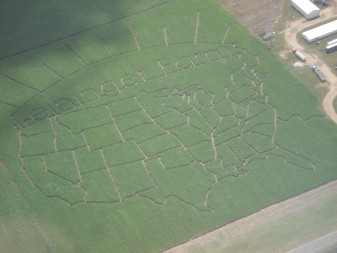 The United States of America in a corn field.

Ron remarks that new technologies such as GPS in combines help farmers by using crop-sensors. The data from the sensors aid in cost reduction by controlling the application of nitrogen, herbicide and other crop inputs. In addition, new hybrids of corn and soybean seeds, along with crop rotation, help to reduce the need for pesticides on crops.

To supplement their farm business, the Holderbaums own Wyatt Sales and Service, which sells and services new and used farm equipment. Barb is aware that having Ron juggle both the farm and sales business can be physically taxing, so this is when prayer is crucial in her daily life.
“I pray so much especially during harvest season for the safety of the family. Ron didn’t come home until 5 a.m. this morning because the conditions were good to pick. I worry about him because I know he is tired, and I know he isn’t the only one out there doing that. It gives me comfort to know that I can pray for him.”

About 15 miles north of the Holderbaum farm is the Leininger farm in Mishawaka. Ed and Linda have been farming for 39 years and currently farm about 3,000 acres of soybeans and corn.

Ed acknowledges that one of the biggest challenges this year has been the weather.

“We had a cold wet spring, and then we eventually got our planting done. Then it got dry in July and there were about five or six weeks without a whole lot of rain. We had a cool wet August and September and the crops were way behind. When we go to dry corn this year we will own a share of NIPSCO,” he jokes.

It’s through faith that the Leiningers are able to weather the storms in agriculture. “I’ve had friends ask me how I keep my sanity and I say it doesn’t hurt to bend the knee once in a while.”

In addition to farming corn and soybeans, the Leiningers have a pumpkin patch in the fall that offers a variety of gourds and corn stalks. In the past two years, a corn maze has opened that entices families and schools to learn and enjoy the benefits of agriculture.

For this year’s corn maze, the Leininger’s eight-year-old grandson came up with the idea of a map of the United States. “We hired a lady and told her what we wanted and she drew the map to scale. From the scale drawing she was able to figure GPS coordinates and laid out the map for us with strings and flags,” Ed remarks.

Afterwards, Ed planted the corn and marked the maze right away. When the corn was about a foot tall, the strings were pulled and the trails were mowed to complete the maze.

To make it an educational experience, the Leininger’s daughter, who is a school teacher, has 20 questions posted at different spots throughout the maze. One question is, “Where can you go to the four corners of the United States? Name the four states.”

The Leiningers also try to throw in a fun fact about agriculture. “For example, Indiana is the third largest tomato grower in the United States,” says Ed.
Although the corn maze has closed for 2009, schools and other organizations can contact the Leiningers about visiting next year’s corn maze at [email protected]