When Afghan refugee families began pouring into Army National Guard base Camp Atterbury in southern Indiana for temporary housing, Cathy Lampton joined other members of her parish in nearby Columbus to extend welcome and aid to the new arrivals.

Lampton, whose strong Catholic faith was forged while growing up in the Diocese of Fort Wayne-South Bend, is now part of a team at her parish, St. Bartholomew, that works with an Afghan family that the parish sponsored for resettlement in Columbus. She also assists with the parish’s ministry to the many Latino immigrant families who have come to work in the Columbus area.

Her efforts build on a strong family faith foundation dating back more than a century to Italy.

“I think I have a greater appreciation for what I have, and I am humbled by what I can do,” Lampton said of how working with refugees and immigrants has influenced her personal faith. 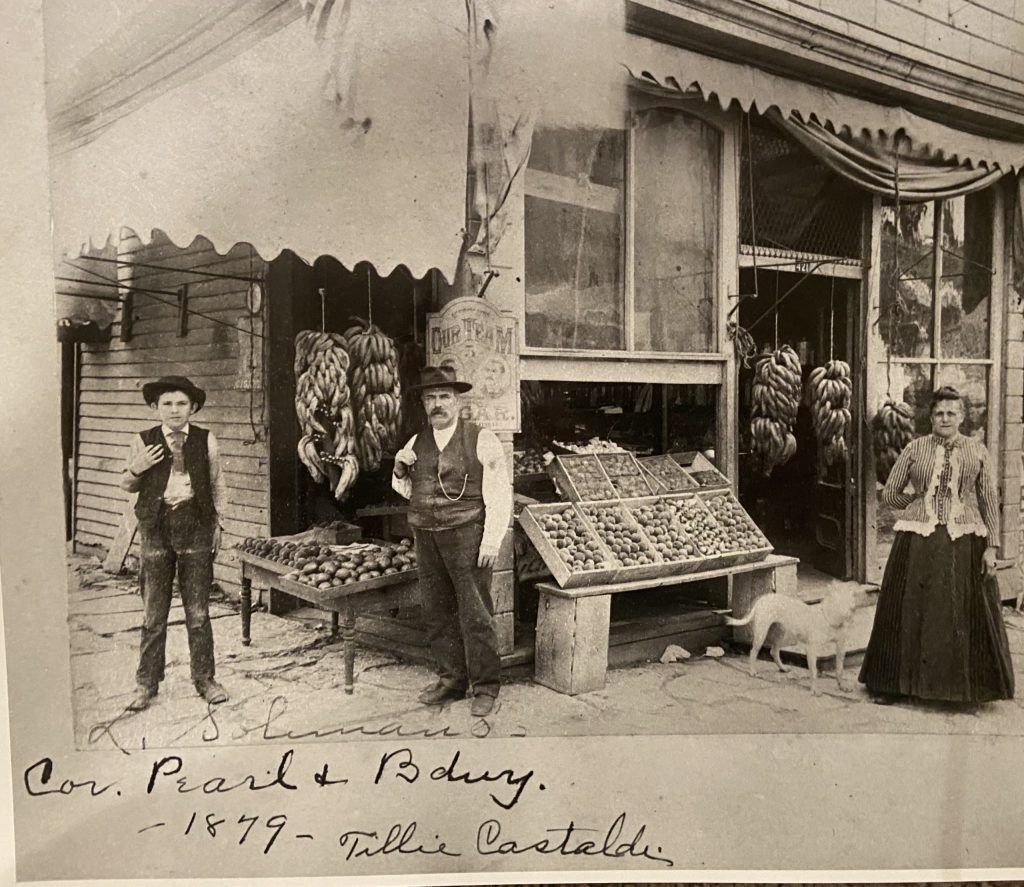 Provided by Tom Castaldi
This photo shows Tom Castaldi’s grandmother Matilda’s brother, Charles, and their parents, Laurence and Mary, outside their Solimano Store in downtown Logansport about 1879.

His grandfather decided instead to leave Italy and emigrate to America, Tom, 83, said. His ancestor worked on railroads in North America before settling in Logansport, where he opened a general store.

Tom’s mother’s family also had deep Catholic faith formed in Italy. He remembers his maternal grandmother had crucifixes hanging on most walls of her home. She also displayed a drawing of Jesus Christ in which the eyes seemed to open when you walked into the room. 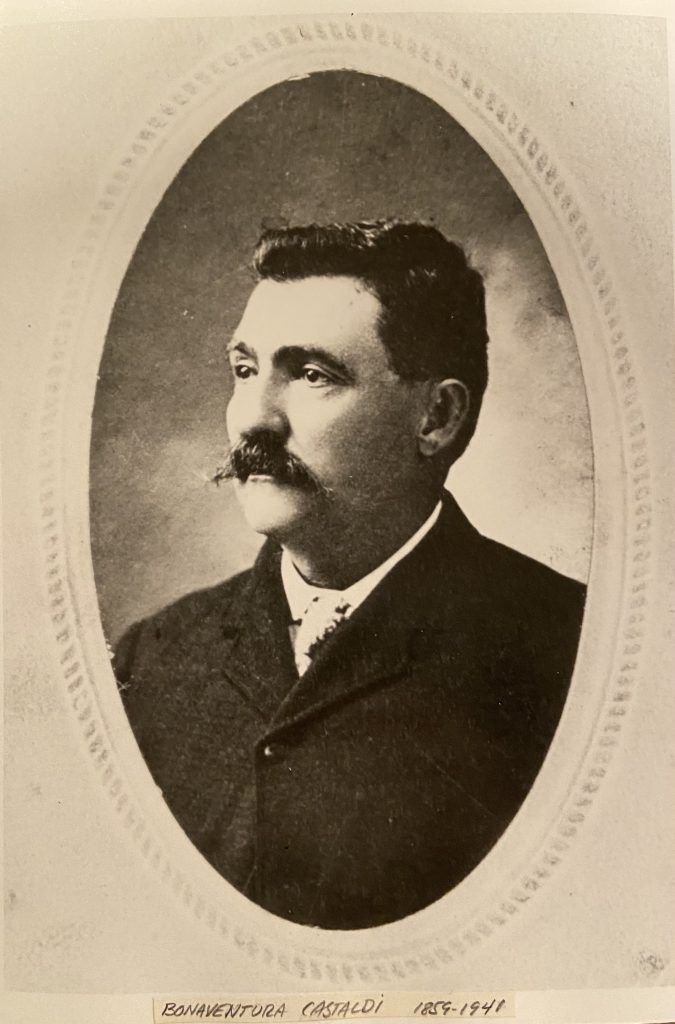 Provided by Tom Castaldi
Tom Castaldi’s grandfather, Bonaventura Castaldi, helped build railroads in North America before settling in Logansport, where he opened a general store and passed on his strong Catholic faith to his children.

Tom believes he acquired his love for the Catholic faith in part through the example of family members, whom he saw support their parish with time and money. His father, Harry, served as Holy Name Society president at their parish, St. Bridget in Logansport, and was a fourth degree member of its Knights of Columbus council. His father’s mother played the organ at St. Bridget. “She was always there when Mass was being celebrated with music,” Tom recalled.

Tom’s father’s older brother, Lawrence “Larry” Castaldi of Warsaw, was a big influence on Tom and in his community and the diocese. Larry played football for legendary coach Knute Rockne at the University of Notre Dame, served as the first President and Board Chairman of the United Way of Indiana, and was co-founder in 1957 of the first Knights of Columbus council at Sacred Heart Parish in Warsaw, Tom said.

His father’s cousin, Armando “Port” Porta, also lived a strong Catholic faith while serving as an executive with Studebaker Corp. in South Bend and on the University of Notre Dame’s Board of Trustees.

Tom’s faith also grew during eight years of Catholic grade school in Logansport, which was part of the Diocese of Fort Wayne until the Vatican created the Diocese of Lafayette-in-Indiana in 1944.

“We were taught in grade school by the Sisters of St. Francis of Perpetual Adoration,” he recalled. “They were solid. My memory of them is they were loving people who were there to help you move on to the next level.”

After attending public high school, he carried his faith with him to Indiana University in Bloomington, where he attended Mass each Sunday with other guys from his fraternity.

“It was our way of life, and we just lived it,” Castaldi said. 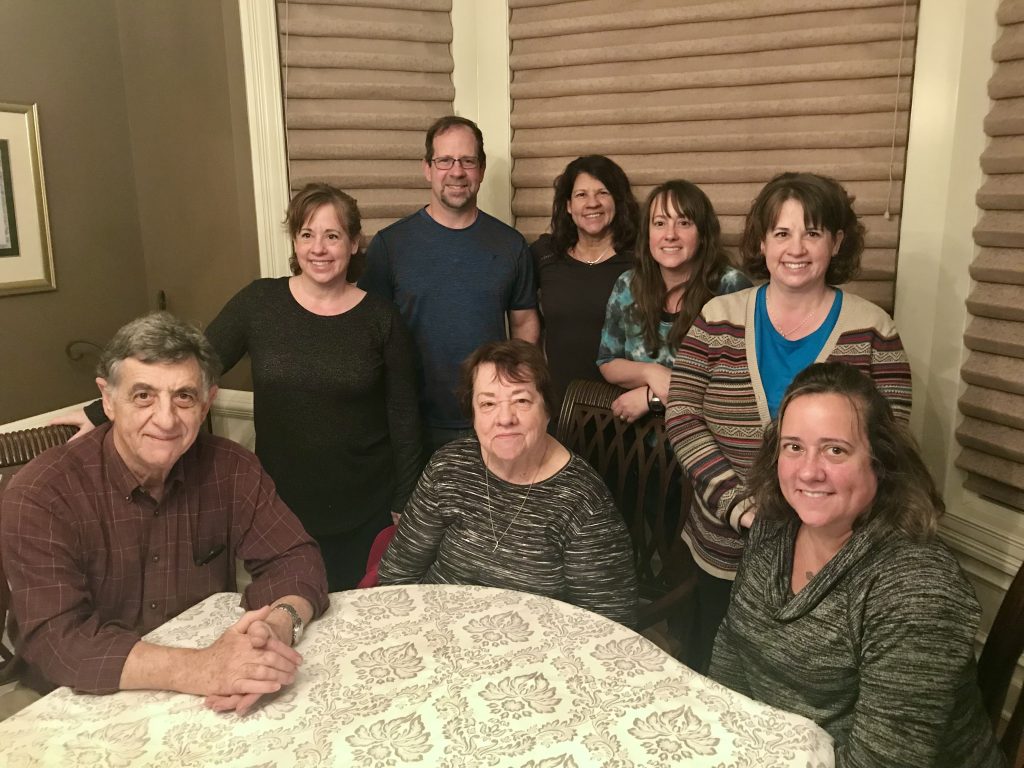 Passing on the faith

The Castaldis attended Mass as a family each weekend and on holy days. Tom also served as a lector. “They may have seen us pray for things,” Tom added, noting that they almost lost one of their six children to cancer.

Tom’s job opportunities led the family to make several moves, but most took place within the diocese. They lived in Fort Wayne from the mid-1960s to about 1970, when they moved to South Bend.

The Castaldis moved back to Fort Wayne in 1977, joining St. Patrick Parish in Arcola. Tom continued as a lector and Linda taught children’s religious education classes for seven years.

“I think when it came to our faith, we always gave an answer why the Church teaches what it teaches and the advantages of the sacraments as well as sacramentals,” Tom said. “We were very open about our Catholic Christian belief, the power of prayer and there’s probably not a room in our house that does not have a crucifix or a saint’s image.”

In more recent years, Tom shared his love of the faith and history by researching and recording about 200 short history episodes aired on Redeemer Radio. The episodes highlighted fascinating stories about the diocese, Catholics who accomplished amazing things, Catholic customs and other topics. The project fit well with his role as historian for Allen County, where Fort Wayne is located. He also has been active for many years in preserving and sharing the history of the Wabash & Erie Canal, which passed through Fort Wayne and Logansport.

He and Linda now are members of St. Elizabeth Ann Seton Parish in Fort Wayne, where he wrote history articles for the parish’s 25th anniversary in 2013. He’s currently working on an article for the parish that explains “who we are and what we do,” he said.

As the Castaldis’ children moved into adulthood, their Catholic faith became a source of good memories and grounding.

“We always, always, always went to Mass,” recalled daughter Angela Weitnauer of Aitkin, Minnesota. “It was always a positive thing.”

Weitnauer went on to participate in Catholic campus ministry at Purdue University in West Lafayette and volunteered with the youth group at the Cathedral of the Immaculate Conception after returning to Fort Wayne following college graduation.

After she and her husband Curt married, they moved to Minnesota, where they sent their children to Catholic school. Angela served at their parish as a lector and extraordinary minister of holy Communion and taught children’s religious education for about 15 years. Ironically, within the past several years, the Weitnauers twice briefly hosted Afghan students who were studying in the United States.

“No matter where I went, whether for work or school, church always felt like home,” Angela said.

Their Catholic faith continues to shape their lives.

“I think the biggest influence is just the underlying belief that people are good,” she said.

The couple started a charitable foundation that makes grants to a variety of causes. “I feel any time we give something away,” she added, “I feel we get three times as much back.”

“Faith was never pushed on us,” but something taught by example, her sister, Cathy Lampton, said. “As a kid, I remember Dad explained what was going on during Mass.”

Lampton, her husband, Carl, and their two young sons moved in 2001 to Columbus from Fort Wayne because of Carl’s job. She began attending daily Mass at St. Bartholomew Parish there, which helped her develop a new community of friends.

She eventually worked part time for about three years as the parish’s Children’s Ministry Coordinator. She later volunteered as an extraordinary minister of holy Communion for the parish’s outreach to the many Latino families who had settled in the Columbus area.

“I felt a common bond attributed to my Italian upbringing,” she said. “The similarities in the Latino culture and the way I was brought up felt at home to me.”

In 2009, St. Bartholomew hired Lampton to help with its youth ministry. When St. Bartholomew became a site for the U.S. Conference of Catholic Bishops’ Catholic Accompaniment and Reflection Experience (CARE) program, which reaches out to embrace immigrants and refugees, Lampton joined. She now is her parish’s CARE coordinator.

When Afghan refugees began arriving in August at nearby Camp Atterbury, Lampton and some CARE team members volunteered to help at the camp. She assisted with English as a Second Language classes. In addition, the parish raised money to buy white boards, soccer goals, computer printers and other items needed for Afghan families to begin building new lives in America.

The work with Latino immigrants and Afghan refugees has been eye-opening and rewarding, Lampton said. “A lot of the people’s lives were threatened back home,” she said of Latino immigrants, most of whom are from Mexico and Central America. “The stories I hear — I didn’t know it was that bad.”

Families told her that gangs sometimes demanded a portion of workers’ pay. Gangs also try to take teen boys to bolster their ranks. If a family refuses to give up their son, the gang often kills someone in the family or a close relative.

Afghan families’ stories are just as harrowing. “You are living through things you can’t imagine,” she said, including families forced to sell their children to get enough money to eat.

Lampton enjoys helping with her parish’s Spanish Mass for the Latino community. The Masses are very joyful but reverent. After special events, the community often celebrates with food in the church basement. “It’s a very loving environment,” she noted.

“I love finding a common bond with the teens and connecting with them in faith, and some of the aspects of Latino culture that are like the family values my parents raised me in,” she said.

The Afghan family their parish sponsored for resettlement includes a husband who speaks English, his wife, and three children ages 3-10.

Lampton helps the children learn English. “I read stories to them, and they read to me,” she said. She also takes the family on outings so they can feel more at home in their new community.

“Working with the Afghan and Hispanic families has improved my personal faith life by showing me what Jesus says love is: ‘You shall treat the alien who resides with you no differently than the natives born among you; have the same love for him as for yourself, for you too were once aliens in the land of Egypt.’”

It’s a love and faith the Castaldi family has lived and nurtured for generations.