Mary Cris Miranda and Gerardo Reyes met at a regional Mexican youth group dedicated to St. Therese, the “Little Flower,” in 1999. Currently attending St. Therese, Little Flower Parish in South Bend, prayer and Christian fellowship have been an essential ingredient in their shared journey ever since. On Oct. 15, the couple welcomed their son, Gerardo Reyes-Miranda, shortly before celebrating their 13th wedding anniversary.

Miranda said children have always been attracted to her husband, who currently plays a paternal role in the lives of the 7-to-9-year-olds he coaches in soccer. She too has exercised motherliness, preferring teaching and mentoring students to research in her academic profession; she has taken a personal interest in her students’ lives that goes beyond academics. The couple also enjoy being the godparents of six young people.

Miranda and Reyes came from large, supportive extended families in Mexico, so it was natural for them to envision a large family for themselves after they married in 2007. She wanted to have her first child before she turned 30, so they began trying after she finished her master’s degree and he was stable in his civil engineering job. Nothing happened. After being married five years, they began seeking explanations.

The first gynecologist they consulted suggested artificial reproductive technology. Seeking a second opinion, they consulted a doctor trained in Natural Procreative Technology and the Creighton method.

They loved the introductory session. During it, Miranda began thinking, “I’d love to learn how to be a fertility care practitioner.” After it was over, Reyes turned to her and said, “You’d be really good at doing that.” Shortly afterward, she began her training.

Miranda compares the approach to fine-tuning an old-fashioned radio. Instead of zeroing in on infertility, it tries to optimize every aspect of a person’s physical, emotional and spiritual well-being, viewing pregnancy as the natural consequence of health. Even if no pregnancy results, one’s quality of life gets better and better in the process.

The couple is committed to doing everything they can to cooperate, “but at the end of the day,” as Miranda puts it, “God decides whether and when and how we have a child.”

Infertility is tough on couples. “Having your husband by your side is absolutely essential,” testified Miranda. She and Reyes have learned to be thankful for every single blessing they receive: being alive, having food to eat, a roof over their heads, supportive family and friends. This protects them from focusing exclusively on having a baby, as if everything else will fall into place when they achieve that one objective and life has no purpose until they do.

“Our prayer began to change. We kept asking for the baby we so desired, believing God had given us that desire, but we also prayed to be happy with God’s plan,” says Miranda. “We determined we’d live a full life, whatever God had in mind for us.” 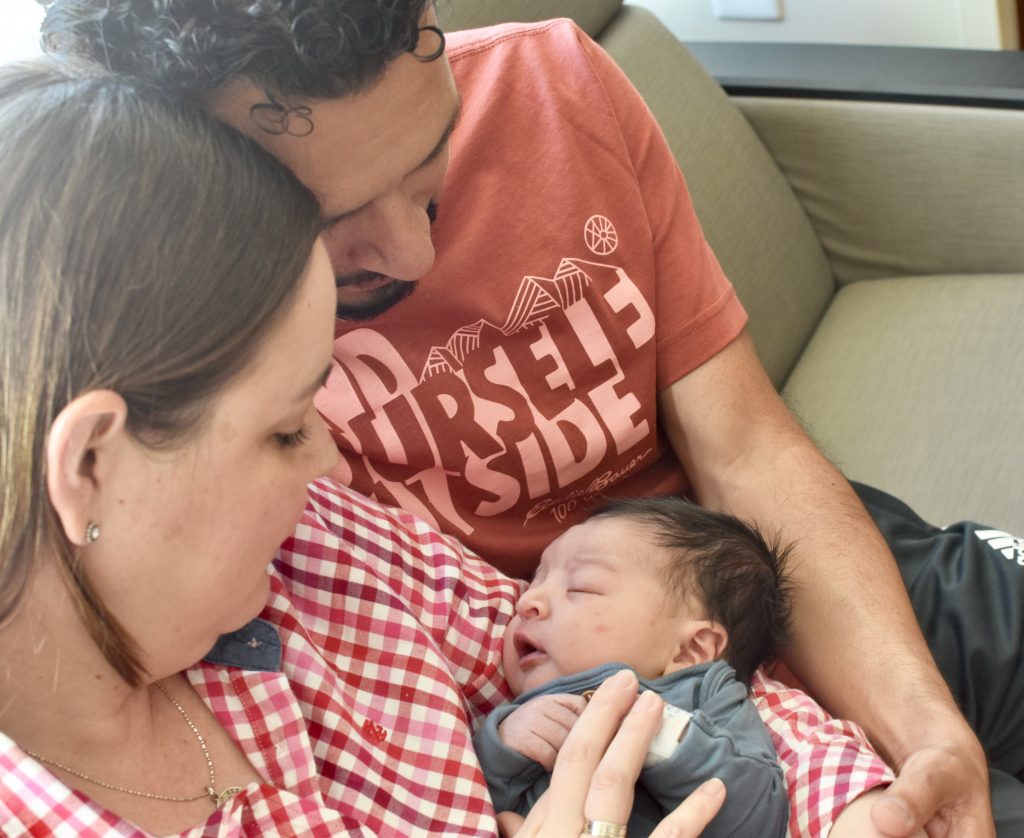 Provided by Mary Cris Miranda
Parents Mary Cris Miranda and Gerardo Reyes of South Bend were overjoyed to welcome a son, also named Gerardo, to the family in October. The couple’s wait to become pregnant was long: During that time they found hope and fulfillment in their faith, including by attending the diocesan Marriage and Family Ministry’s Hope for the Journey group.

When they came to Notre Dame in 2015 so Miranda could pursue her Ph.D., they began seeing doctors at St. Joseph OB/GYN Specialists and Midwifery. Suzy Younger, her fertility care practitioner there, told Miranda about Hope for the Journey. She attended its first meeting at Anna McKeever’s home, only blocks from their house.

“I was a little apprehensive,” she admits, “but it was wonderful. Infertility can be such a lonely journey. It can be difficult to open your heart and tell your story, but these ladies understood, and each brought a slightly different perspective that enriched us all. We all shed tears as we shared, but our meetings weren’t sad. We helped each other explore what it means to live up to our full potential as women.”

Miranda served on the committee that helped plan last year’s Evening of Hope and Healing. She greeted couples at the door, giving each a rose and a copy of a prayer to Our Lady that Lisa Everett, director of Marriage and Family Ministry for the Diocese of Fort Wayne-South Bend, had found. The evening served as a powerful reminder that Jesus is the divine healer.

Miranda didn’t know what to expect when the prayer team laid hands on her and Reyes, but it was wonderful, something like heaven opening and a flood of light penetrating each of them on a deep level, she said. “I didn’t even know what was broken and in need of healing, but deep inside I felt myself being restored.” Her husband had a similar experience. They were also touched when Father Terrence Coonan prayed over them in Spanish.

Of course this wasn’t the first or the last time the couple prayed about their infertility. While home in Mexico for Christmas in 2018, they visited a Bridgettine nun with a charism for praying over childless couples. She gave Miranda a blessed cincture to wear around her waist and gave them a written prayer to offer every time they went to Mass. Daily they prayed the prayer they received at the Evening of Hope and Healing.

Since they only have one car, Reyes driving his wife to work every morning provides an opportunity to start every day by praying together. They said novenas and sought help from saint friends including Bridget of Sweden and Gerard, patron saint of mothers and motherhood. They also followed every suggestion offered by their doctors.

“Sometimes it’s hard to keep the faith and hold onto hope,” admitted Miranda. “It’s tempting to think, ‘Why are we doing all this when nothing ever happens?’”

On a Sunday early this year, they checked their chart. Sure enough, it was the right day for a pregnancy test. They picked one up at Costco, along with supplies for Miranda’s birthday party the following week. Miranda took the test, but she was reluctant to look at the result so her husband saw the good news first. With joyful tears and disbelief, they called to let friends and relatives know they were pregnant and to ask for prayers.

Reyes’ father wasn’t surprised. He told them he’d been dreaming about that phone call for a week and was just waiting for it. Their 8-year-old niece had also told her parents that her godparents would be having a baby in 2020.

Miranda struggled with how to tell her Hope for the Journey group. She was pregnant. She knew they’d be happy, but she didn’t want to invade that safe space with a sudden announcement. She decided to make a video and send it to each member of the group so that each would have time to process the news in her own way. Their responses, including a return video, were wonderful expressions of joy and hope.

Because of the pandemic, their Mexican baby shower was virtual. Several people confessed they’d been praying for them and greatly admired their patience in waiting for God’s timing.

Despite years of biological infertility, the couple has always loved teaching and nurturing children, so now that she is a new mom, Miranda offered this advice:

“When you see a couple who don’t have children of their own, you may not know their desires or struggles. But you can quietly pray for them and actively encourage them by pointing out how they have already manifested fruitfulness, perhaps by listening attentively, fostering reflection or growth in others.” She also suggested inviting couples without children to child-centered events like birthday parties, rather than automatically excluding them.

Despite their difficulty conceiving, the pregnancy was healthy and uneventful. Gerardo, the fourth generation to bear that name in his family, was born sound and healthy.

Hearing the hospital chimes announcing his birth brought tears to Miranda’s eyes as she was wheeled to the postpartum room, she said.

“This baby is already fulfilling his mission, bringing hope. He is a sign of God’s faithfulness and goodness.”