Observing the Advent season looks a lot different this year than it has in previous years. Nevertheless, parishes continue to provide opportunities that encourage families to observe the season with anticipation and hope.

In 2020 the second Sunday of Advent coincided with the feast day of St. Nicholas, a beloved patron saint of children. A new tradition for the feast day was observed at Our Lady of Good Hope Parish, Fort Wayne.

A holy hour for families took place in the church, which included eucharistic adoration, prayer and benediction. The holy hour began at 5 p.m. with exposition of the Eucharist.

The only light within the church came from the candles lining the altar, smaller votive candles on the sanctuary steps, a spotlight directed towards the monstrance and rows of paper lanterns flanking the center aisle, giving the space a hushed, reverent atmosphere. The prayerful silence was broken by a recording  of a soft Gregorian chant and the voices of the very youngest present.

After a few minutes of silent prayer, Father Daniel Whelan read I Cor. 13:1-13. A short homily followed in which he encouraged the families to pursue holiness and prayer and to foster a true domestic church within their homes. He closed with the blessing, “may your homes be a reflection of God’s love in the Trinity, as He shows us in His son, Jesus Christ.”

The theme of encouraging families to pray together continued as the attendees were invited to write down their prayer intentions on notecards and place them in a basket at the foot of the altar. Many knelt for a few moments to pray directly before the monstrance before returning to their seats.

After praying the chaplet of the Holy Family with the petition to receive the graces of the Holy Family, the hour of prayer and adoration ended with benediction.
Father Whelan has organized a number of similar holy hours at the parish over the last few years. The importance of taking time to pray as a family is essential, he said, especially in these times

He hopes that families will return to their homes with them the same attitude that is fostered in church. “The main thing is for them to continue to bring the love out there (into the world),” he said.
This was the second Our Lady of Good Hope parish holy hour geared specifically toward families on the feast of St. Nicholas. The saint’s patronage of children makes the timing of the holy hour especially poignant.

Under normal circumstances, the children are allowed during the holy hour to come quite near to the altar to adore Jesus present in the Eucharist; however social distancing requirements made a gathering of children up at the altar unfeasible this year. Another missing feature was the reception in the parish basement following adoration. 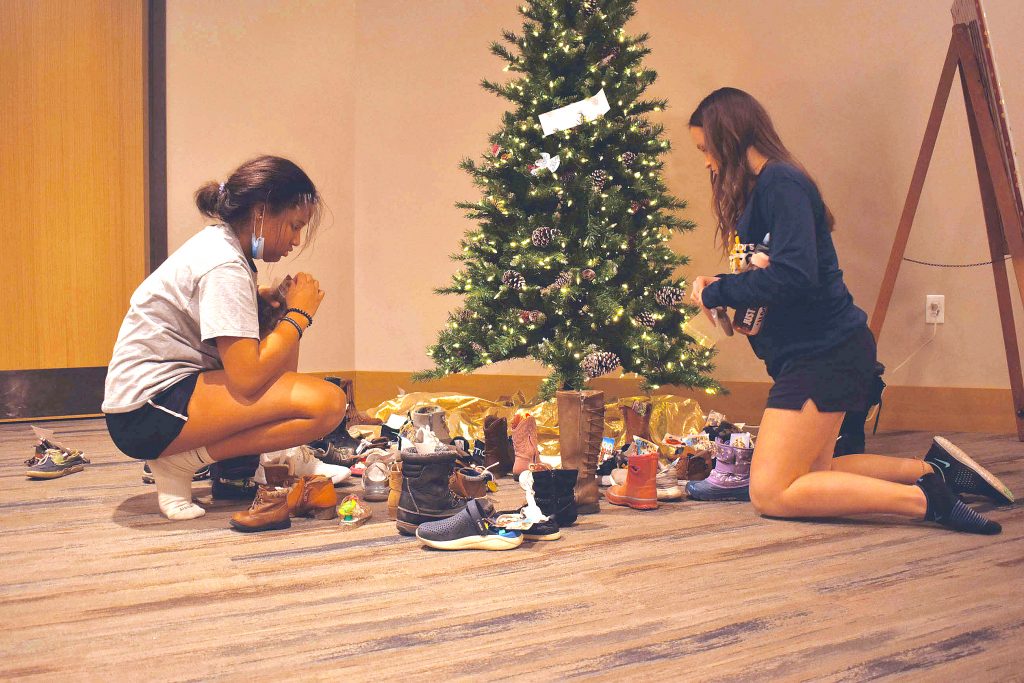 Isabel Kern
Volunteers put candy, holy cards and rosaries in shoes left in the gathering space of Our Lady of Good Hope Church, Fort Wayne, on Dec. 6, the feast day of St. Nicholas. The parish offered an Advent holy hour for families at which children were encouraged to put one of their shoes underneath the tree for “St. Nick” to fill.

The tradition of setting out shoes to be filled with treats in honor of St. Nicholas was not foregone, however. Children were invited to leave a single shoe beneath the Christmas tree in the gathering space of the church and while they were praying inside with their families, volunteers filled the shoes with candy, prayer cards and rosaries.
St. Nicholas of Myra lived in the fourth century A.D. in what is now modern Turkey. He served as a bishop for much of his life and suffered many persecutions along with his fellow Christians, including being thrown into prison.

He was raised by devout Christian parents, whose great impact may be seen later in the saint’s life by his great generosity, love and boldness for the faith in the face of persecution. There are multiple accounts of him giving gifts to poor families. He also lived in a time of persecutions and plagues, similar to the Church’s situation today.

In St. Nicholas, Catholics find among themselves a “great cloud of witnesses” (Heb. 12:1) and a friend who understands anxious times. He remains an example of living joyfully and growing in holiness even in the face of hardship.