A sense of peace and otherworldliness encompasses a grassy, tree-filled, square lot in the heart of Mishawaka. Cars and trains roll by on three sides without realizing the significance of what the wrought-iron fence contains; the final resting place of hundreds of Catholics who advanced the faith life in Mishawaka.

This is St. Joseph Catholic Cemetery, and Pete De Kever is determined to tell the stories of those who lie therein. 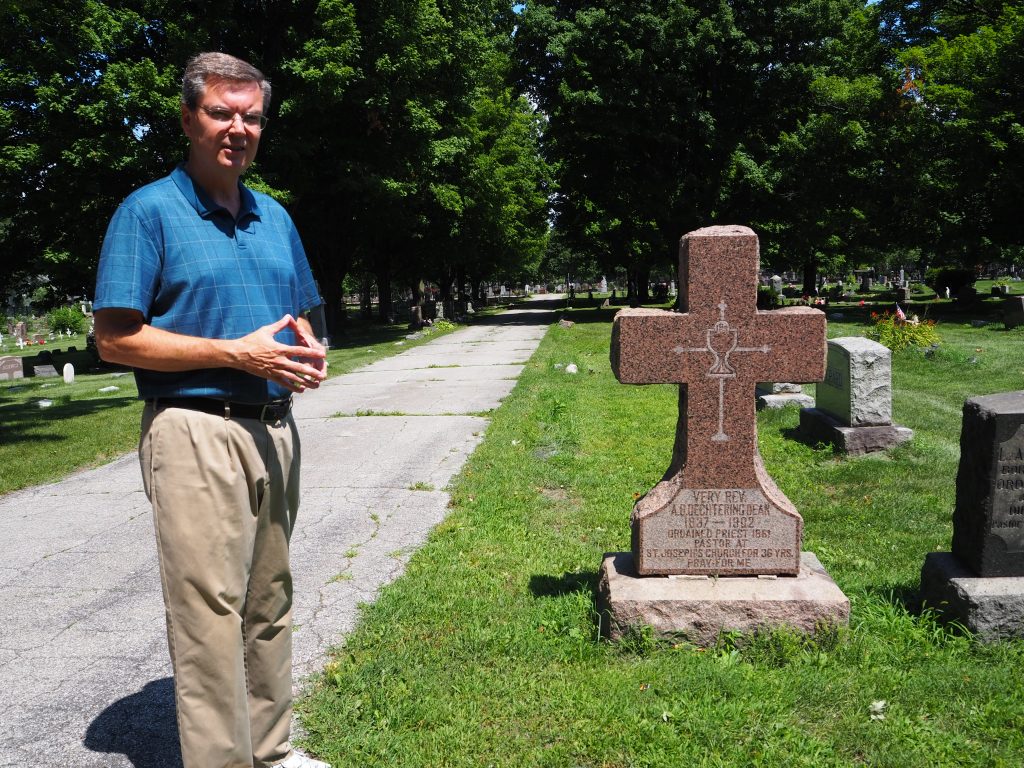 Pete De Kever, Mishawaka historian, stands by the grave of Father August Oechtering, an early pastor of St. Joseph Church who served in the parish for 36 years. De Kever frequently gives tours of the cemeteries in Mishawaka, teaching participants the history behind the gravestones.

De Kever, a former high school English teacher and athletic coach, was appointed historian laureate of Mishawaka by Mayor David Wood in 2019. His interest in the history of the cemetery goes back to his childhood, when his father would bring him to St. Joseph to maintain the family’s graves. Through his work as a historian, De Kever has dug up many stories of those who were laid to rest at St. Joseph, Fairview and Mishawaka City cemeteries, which are all located in the same city square.

Three years ago, he began giving tours of the gravesites. The St. Bavo parishioner wanted to give a strictly Catholic tour of the final resting places, however; the idea finally took form on Aug. 15.

“By studying the history of the cemetery, we are studying the development of Catholic churches in Mishawaka,” De Kever stated.

The importance of these graves to the local Catholic community cannot be overstated. Many of the families De Kever has profiled gave much of themselves to help establish St. Joseph, St. Monica, St. Bavo and even Queen of Peace parishes, donating money for stained-glass windows and the manpower to lay the foundations of these churches. 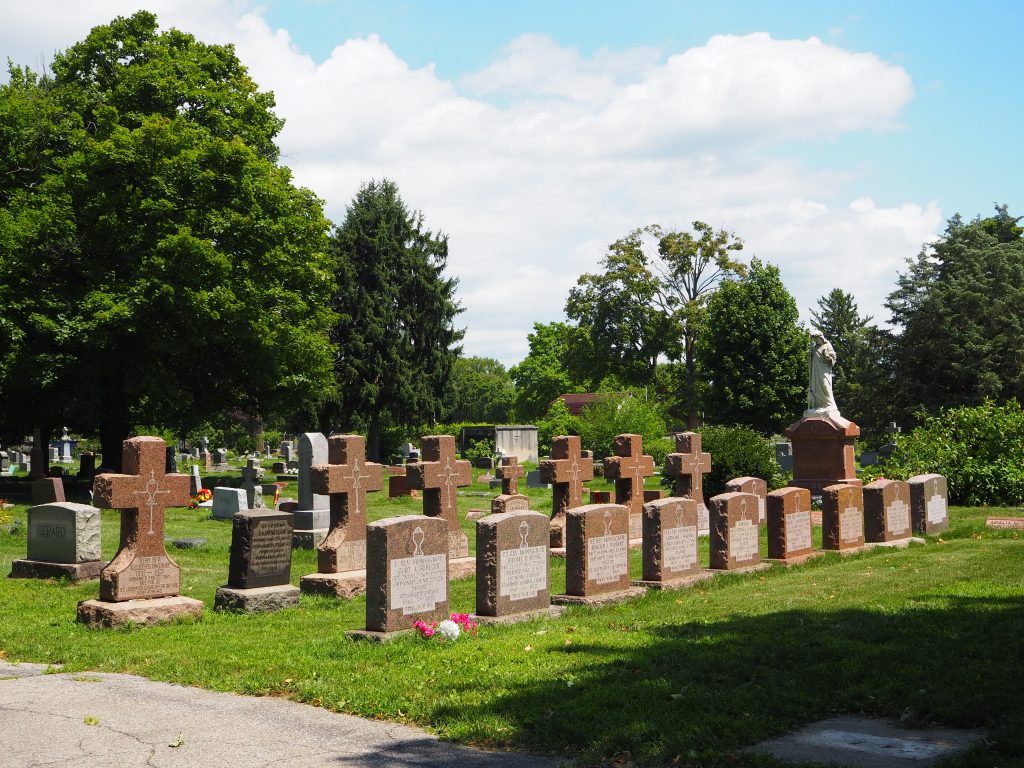 Photos by Jennifer Barton
Several priests who served on the northwest side of the Diocese of Fort Wayne-South Bend are interred in the priests’ section of St. Joseph Cemetery in Mishawaka.

Founded in 1863, St. Joseph Cemetery boasts the largest crucifix in Mishawaka, installed by Schumacher Construction. The cemetery actually belongs to St. Joseph Parish and is maintained by a committee there, though burials have not been limited to members of the parish. Most of the graves in the cemetery are old and new burials are limited due to space constrictions, though the St. Katharina Kasper columbarium has allowed for a few more resting places.

Politicians, businesspeople, sports legends and even an actress take pride of place in De Kever’s tour. Additionally, an entire section of the cemetery is dedicated to priests and religious sisters who faithfully served the Diocese of Fort Wayne-South Bend and built the Church in Mishawaka. 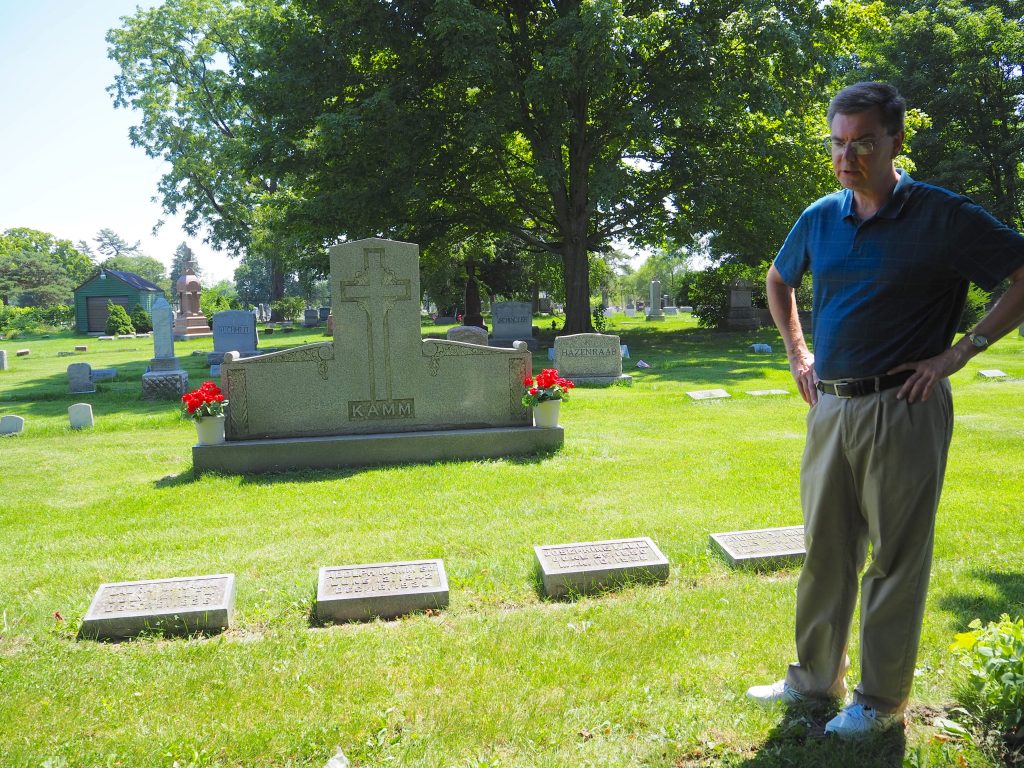 De Kever relates the history of the Kamm family at their final resting place in St. Joseph Cemetery, Mishawaka. He has recently created a tour of St. Joseph that focuses on the Catholic families and priests buried there.

Two of the prominent families De Kever speaks of during the tour are the Kamm and Schellinger clans. These families were linked, as patriarchs Nicholas and Adolph were not only as business partners but also brothers-in-law twice over, marrying each other’s sisters. They owned a brewery called Kamm-Schellinger. The Kamms donated the altar at St. Joseph, and Adoph served on the building committee for the church. The family also financed many stained-glass windows at the three parishes.

Several of the people buried at St. Joseph impacted the world beyond Mishawaka.

Richard Caleal designed the 1949 Ford — the car that “saved” Ford — in his Mishawaka kitchen. A member of St. Monica Parish, he was interred at St. Joseph after his passing in 2006. Virgil Van Dinter met with Gen. Jimmy Doolittle prior to his famous raid and was asked to design fuel tanks to equip the B-25s for the mission. Actress Irene Vergauwen Vernon played in the television series “Bewitched” for two years, returning to South Bend prior to her death.

And no Catholic cemetery tour in the region would be complete without a University of Notre Dame athlete. Achille “Chick” Maggioli played halfback on the 1943 national championship team before being called up for military service in World War II. He served in the Marine Corps in Okinawa and returned home to play on the University of Illinois’ 1946 Rose Bowl championship team. Afterward, he played professional football for a few years before settling down in Mishawaka as an entrepreneur. De Kever knew Maggioli from times they both came to St. Joseph to maintain their family’s graves.

The more De Kever learns about the stories behind the graves, the more his interest increases, he said. He hopes to continue coming to the cemetery and uncovering more stories of the people buried there. Through his research he has been able to discover where some of them lived, as some of those houses are still part of the neighborhood. A portion of the Fairview Cemetery, located across the street, was once owned by the Diocese of Fort Wayne-South Bend and is now the Catholic part of that cemetery.

De Kever offered a reminder that Catholics are members of the communion of saints, so there is a connection with the deceased — even if they are not blood-related. “Whenever we receive Communion, we are spiritually connected to people in the cemetery. In the act of us receiving, we experience a unity with those people that goes across time and space.”

His work in this area fits neatly into the mandate to perform corporal and spiritual works of mercy; namely, burying the dead and praying for their souls. He hopes that prayers will continue to be offered for any souls who may still be in purgatory.

De Kever also works hard to keep the memories of Mishawaka residents alive through his writing. He has written several books on the city, including “Walking Mishawaka,” which features many of the individuals highlighted in the tour; because “If these people are forgotten, it’s like they died twice.”